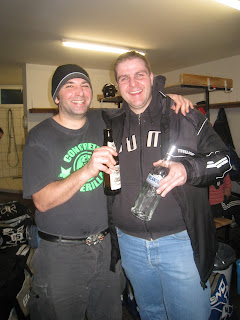 When we arrived back in Germany the fun factor turned up a notch , pretty much immediately ! No offense to everyone else but i love Germany for some reason or other ...must be all the great beer . When we got off the plane Rainer received a text from Ralf Dreiseitel , they needed a goalie in Senden,Germany that same night . So we took train and jumped into the car and drove off to Senden without a second thought :) there we had a fun game with the Tussa Ice Eagles , after our skate Ralf welcomed me with food and lots of beer !!! I want to thank all the Ice Eagles but mainly Ralf , thanks for getting me on the ice in yet another city in Germany . 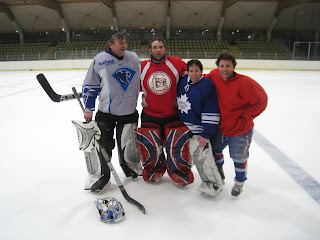 After Senden we went back to Aalen knowing we had to go back the next night basically near Senden in a town called Ulm . A friend of Rainers came to pick us up ... so i have to thank Robert Wittlich for letting me jam my huge goalie bag into his smaller car :) Robert didn't speak much English but we found a way to communicate regardless . After we went for McDonalds ( might have wrote that blog that night LOL ) At this ice time in Ulm i had a great time , the other 2 goalies were just great people .... Andreas Winter is the bigger goalie beside me and the super Leafs fan with the goalie gear is Tobbias Gobbel with Robert at the end . As usual i got along really well with all the guys and at the end i got asked a ton of questions just about hockey in general ...actually mostly about the Leafs from Tobbias ( he really is a super Leafs fan !) .Thanks for the great memories guys , i hope to see you all again in the future .

It is only natural that i thank the guys in Aalen for letting me play goal outdoors with this goalie that was unbeatable , he embarrassed me LOL !!!! I am really happy for you all having at least an outdoor arena to play hockey on , i hope someday you guys have an indoor rink to play in . I have stayed in Aalen twice before and this was my first time playing with these guys , i met some of them last time i was in Aalen . And stop picking on that young guy seen at the bottom right of the picture , he might lose his mind someday ;)


Not sure if i ever thanked my favorite bar in Germany to date !!! Coban's Irish Pub !!! Some of my most umm memorable??? nights have started at Coban's ...this year i got to meet the owner and let me tell ya this guy was a fun guy to hang out with . Servet you know i will be back ! Went there 2 times during my stay there this time and the last time was a wild one where i met all the crazy younger locals that frequent this pub . Freddy and Stephan ( whom i still can't find on Facebook , send me a request ) and the super drunk little guy who totally was my best friend for some reason LOL . Either way i want to thank all of you guys for a great last night in Aalen , my head was pounding the next day but i am still wondering how Stephan made out ? did he have a concussion ?

The next day i was in Regensburg , there are so many people to thank from there ... pt. 3 later on possibly...
Posted by The Travelling Goalie at 7:03 AM