Should i Get onto this Plane? 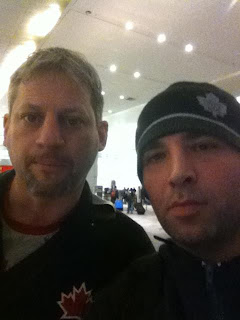 Woke up REALLY late on the day i had to leave ... the night before i did not look at what time my flight was and basically went to be very late and woke up 3 hours before my flight departed ! Woke Rainer up and started to move as fast as we could .

Rainer dropped me off at the airport and we really did not say good-bye i just grabbed my bags and started to run ....nothing unusual as this seems to happen to us all the time ! i really have to start booking later flights home LOL ... when i got inside the lineups were jammed and i had 2 hours to get on the plane . I started thinking that there is no way i was going to get onto the plane as the people in front of me all had sporting equipment to check in and that was when i found out that i was on a plane with the Canadian Youth Olympic team that just competed in Innsbruck !!!

Wiping the alcohol filled sweat off my face i began to get more nervous .... when i finally got to the counter there was 20 minutes left to catch the plane and the lady at the desk did not even bother to charge me for my overweight and let me put an extra bag on the plane for free ... so i dodged 1 bullet by not paying but i still had to catch my plane !

Got to the plane with 1 minute until departure time :) then was harassed by police before boarding ...got the 20 questions as i guess i look like a terrorist or something ??? weird as i already cleared security but whatever  , got on the plane and sat down beside a girl that was on the Ski team ... she was a bit cranky so we didn't speak much . Then we sat on the plane for 3 or 4 hours !!! without leaving , i watched MoneyBall while we waited to leave then the announcement came that the flight was cancelled and we were taken off the plane and rushed to the service counter to get our hotel voucher , $100 discount off next flight , and 15 Euros coupon for food at airport .....

I took my coupons and went to get food as we were only given pretzels on the plane ... found a place with reasonable prices and food i could stomach and then i met Curtis Hunt . He looked as baffled as everyone else on the plane and we began chatting , then i asked him so i assume you are too old to compete are you a coach ? He replied yes , introduced himself as Curtis Hunt and told me he was 1 of the coaches for the Canadian Hockey Team !!!! WOW REALLY !!! of course i was in awe , we talked about the situation ordered our food then i began to try to figure out what the heck was going on .

We didn't have to gather our luggage which was great , as i did not want to have to pay for them now LOL . I found my way to the hotel shuttle and waited for it to arrive .... then this van showed up and the first group of us piled in . Got to the Holiday Inn Express which seems to be there just for these occasions ??? and checked into my room ... I should have looked up Curtis on HockeyDB but couldn't get online with no free wifi and only 1 working computer in lobby there was a lineup to use .

The next morning we had to catch shuttle at 5:45 AM !!! And our flight was supposed to leave at 8 AM , i woke up at 4 AM just in case , had some food which to this moment i still can not call breakfast LOL ... bread with meat and cheese is lunch :) Went to airport , everyone there was confused with our flight stubs as they told us to keep stubs from day before . Now i had time to get some booze at duty free . There was another traveller i met named Martin and we ended up sticking together as we were both travelling alone . At the airport i have a friend whom i won't name for security reasons :) he is a mechanic and he messaged me letting me know that my flight WILL BE DELAYED again ... i mentioned this to a couple people and for some reason we were rushed onto the plane again , where we sat for another couple hours then taken off AGAIN !!! apparently the part that was repaired was still broken ??? and apparently they don't test these things after they are fixed ??? Sounds safe ??? Well it got pretty crazy after this and there was little to no communication at the airport , we were taken by bus to the terminal again and everyone was running everywhere trying to get nowhere first !!!

We had to clear customs AGAIN and rush back to the same desk we were at the day before to rebook flights to come home .... some people were ahead of me and got re booked then i heard the rumour that the same plane was ready to go . Martin and myself said we just want to get home and we will risk losing our spot in line to get onto the plane . At this time i heard people that were nervous about taking this flight and were not going to get back on this plane , some people were re booked and stranded there and some people just wanted to keep trying to catch their other connections . 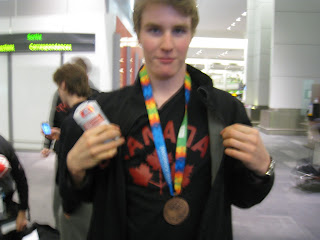 We got on the plane and finally we left !!! everyone was clapping yet nervous , thank goodness we all arrived safely . When we got to Pearson Airport i met up with Curtis and the future of hockey in Canada , got a couple pictures of some of the guys with their bronze medals as seen above . Didn't really want to cause a fuss but i was excited to meet these guys . Apparently they were just as excited to meet me . Curtis had some really kind words for me and i wished him the best ... i hope that you guys all got home safely , last i heard was that Curtis' connecting flight was already gone .

When i got home i looked up Curtis .... he won a Memorial Cup , was an assistant coach with the Ottawa Senators , had played with some amazing hockey players i grew up watching ... i wish i knew all this earlier but then again it might have made me less appealing to talk to as i probably would have acted like a kid in a candy store , then again it might have been right up his alley as he seemed to have good control over a bunch of young kids anyways ... good luck to all you guys i met , hope to hear of you all having successful careers in hockey . If you want to look up Curtis here is a link for his hockey data base

So now i am safely home , jet lagged and today i should write to Air Canada ... 25 hour delays on flights with so many mistakes should get me more then just $100 off my next flight . At this point i am just glad to be home in 1 piece , unfortunately i can't say so much for my bags DOH !
Posted by The Travelling Goalie at 6:28 AM