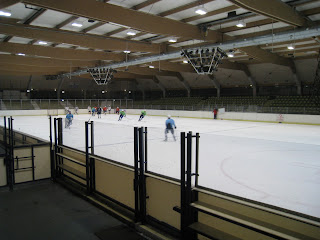 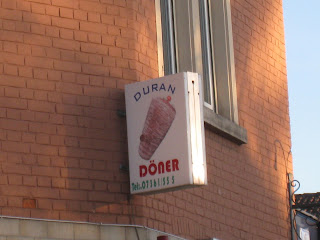 Being back in Germany means i got drunk , i am telling you that Jaegermeister shit is filled with evil demons . I had 1 shot of it and it just kicked my ass .... so when i woke up yesterday i felt like a punching bag , really needed to eat and here in Aalen is 1 of my favorite places to eat Kebab in the whole wide world ! I have been to Aalen twice before and i have always enjoyed eating at Duran :) the meal i had was huge with kebab, salad and fries on the plate ... it is always filling . 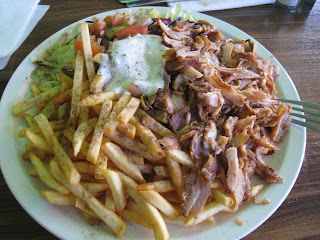 After our meal we headed back to Rainers place to relax before we had ice time in Ulm .Ulm is about a 1 hour drive from here and 1 of Rainers buddies picked us up and we jammed our bags into his car which on the way i was totally falling asleep ... zzzzz when i got to the rink we were in a rush to dress and i met a couple guys quite briefly .

Got my gear on quickly and properly and went out to the rink which is quite nice as you can see in the picture above :) the ice was really good , much better then the ice i played on in Senden which had dead boards ( dead boards meaning the puck hits the boards and just stops LOL ) . 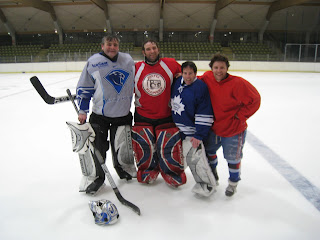 As soon as i got to the bench i got to meet Andreas Winter , he is the big goalie beside me ! He was a really good goalie , we spoke about a few things like travelling etc.. great guy , we had 3 goalies out  so i asked him how they like to handle things as i am a guest i don't like to push my way around , every 10 minutes or so we would switch but it seemed like less and the icetime was organized quite well with both teams being evenly matched . The smaller goalie in the picture is Tobias Gobbel , he is a true blue Leafs fan .... we really got along quite well !!! I hope he decides to visit Toronto AGAIN in the near future .... he really surprised me having mentioned a fellow travelling writer by the name of Dave Bidini . He really enjoys his books and if he comes to Toronto i should be sure to take him to watch him perform live ( Dave is in a band called BidiniBand ) . I really really enjoyed chatting with both of these goalies and was actually dragged away from them as we probably would have sat for hours talking about hockey ..... it was my pleasure meeting you Tobias and Andreas . PS Andreas i found you on my Travelling Goalie page on Facebook but your settings are SO PRIVATE that i can't add you LOL .

Now here is the title story ok ... no matter where i am in the world it always seems that whoever is driving is more then willing to go eat at McDonalds after hockey LOL last night was not an exception , our driver Robert ( seen below with myelf and Rainer ) took us there and we had some McNuggets and Big Macs ... still can't believe they have the McRib here , it was awful back home so i am not really interested in trying it here . I don't ever remember visiting a country and not eating McD's .... almost defeats the purpose of going out to get some exercise doesn't it ? I guess the beers after isn't the healthy choice either but you know what they say ....when in France do as the French do , something like that . Or in Asia , same same but different . 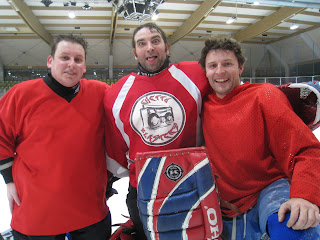 Today is my last day in Aalen and i am gonna miss it here :( i finally get the chance tonight to play hockey hockey here ... OUTDOORS !!! should be alot of fun i can't wait ... tomorrow i will be probably blogging on my Ipod again :( while on a train .... have to get up really early to go to Regensburg  . Ciao for now
Posted by The Travelling Goalie at 4:40 AM