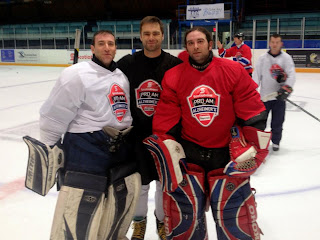 Lately waking up at 3 am and its getting annoying ... there is really nothing to do when you wake up this early , just start watching the shows you would be watching when you should be trying to fall asleep . Problem is that i am falling asleep so early , i think i fell asleep around 8 pm last night . It is mainly due to work as i have had some overnight gigs lately and some really early calls . Today i have to take a nap in the afternoon to break this evil cycle :)

As of late i have also been asked by quite a few individuals to promote their products on my page ... some stuff i am not too keen on but there are some things i might begin sharing with the rest of you over the coming weeks :) The one thing i have really been helping with is this Baycrest Pro Am which is a fundraising tournament to help find the cure for Alzheimer's ... unfortunately this is something we probably have all dealt with . I don't want this to be a downer so don't dwell on the subject too deeply ok :)

This past week i got another call to go out to skate with the NHL Alumni , this time on real ice ! This is another day i had to wake up ridiculously early ... the day before the skate i was asked to bring out some skaters so i reached out to some of my Ghetto Blaster team mates and brought a couple with me for this 6 am skate ... yup i had to get to the rink by 530 am and it was not around the corner , it was at St. Mike's Arena which is a hockey shrine here in Toronto ! Of course when i got to the rink i was sent to the room to find out that the jersey i had to wear was not a goalie cut ... NOTE TO ANYONE ORDERING JERSEYS *** ALWAYS order a goalie cut jersey for your goalies !!! makes our lives a bit easier :)*** so i cut mine LOL , of course with permission .

Somehow i fit into that players jersey and got onto the ice , of course my team mates lit me up and there were a whole bunch of old familiar faces that were there too which made the skate that much more awesome . All the Sgt. Rock guys , Jackie Boy , Munday  was great seeing you all ! But then the real treat showed up , Darcy Tucker . So i guess you are wondering if he lit me up ? I shit you not when i say i had his number . right off the bat i stoned him ... now don't get me wrong he probably wasn't trying at the beginning but he started to put more effort the more i began to stop him . I do have to give him props for taking my pants off on a breakaway though .  Darcy was running drills as we were doing this all to promote the fundraiser on Breakfast Television . 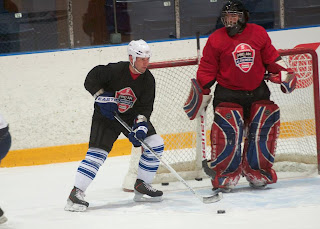 Mark Napier , Dave McLlwain and Curtis Joseph all showed up and there was even a segment where the weather man for Breakfast Television , Frank Ferragine aka Frankie Flowers had a breakaway on me televised .... that was after i stoned McLlwain during same segment , and yes i stopped Frankie :) . Everyone was smiling and laughing and in so much pain from skating for 3 hours with Rob Weir cracking the whip making us constantly play hockey LOL it was great because i was with a bunch of good old friends and NHL'ers .... it was like we rented the ice and got the NHL Alumni to skate with us , actually that is what happened :)

At the end of it all we were dead tired though , we stuck around to watch the other NHL Alumni members skate with the media . Guys like Marcel Dionne , Wendel Clark , Doug Gilmour and even baseball player Greg Zaun strapped on the Blue Jays inspired goalie equipment . I hung around for a good hour or so and went for beers with Derek . There were so many highlights but for me i always get this big smile when i see Marcel Dionne , the guy has this infectious smile and was asking me yet again to go visit his restaurant . He gave me his email to contact him to make sure he is there .... hopefully i can go for a skate with him some day and get some good hockey stories out of him .

That was such an awesome day ....
Posted by The Travelling Goalie at 4:43 AM No comments:

Rise and Shine ! up wickedly early to go skate with the NHL Alumni to support the Baycrest Invitational Tournament which is a mega fundraiser to help with research to help cure Alzheimers ... i am pretty sure we all know someone that has suffered from this , it sucks so if you can send a donation that would be awesome if not no problem ... i am not much a fundraiser that way but i do try :) http://www.scotiabankproam.com/ check out the webpage regardless !

So i have 3 hours on the ice this morning starting from 6am -9am with guys like Darcy Tucker, Curtis Joseph and some familiar names from my last skate like Dave McLlwain and Mark Napier . It is gonna be awesome !!!! I had the opportunity to bring a few friends with me so i got some of my Ghetto team mates to come out to share the experience .... got a beer packed in my bag for after LOL even though i will be sitting around watching guys like Wendel Clark and Doug Gilmour after i get off the ice . Shame i can't get on with them but at least i will cross their legendary paths .

Its just about that time that i head out to pick up guys on the way to rink ... i love playing hockey in the morning !

Gotta run but i promise to get some pics and post them here this weekend !
Posted by The Travelling Goalie at 4:46 AM 1 comment:

Of course i am awake sitting around at 6 am bored out of my skull already ... the last couple weeks my work schedule has been how would you say ummm sporadic ! Yeah it is pretty dry out there for anyone that is a freelancer ... i work in 2 different positions and both of them are dry . And of course today i have 10 more weeks to save up as much money as i can for my big trip to South America .

It always happens , i get my flights paid up and hotels booked then it comes down to spending cash and that is usually the last thing i need to save up for ... sometimes it comes down to the wire , but i am hoping this is not the case this time as i have been really prepared as my flights were not cheap to say the least . That drained my account pretty quickly ! I have been on trips before where i needed Kathleen ( my awesome girl friend ) to deposit cheques into my account to keep me afloat LOL ! With 10 weeks i am pretty sure those cheques can go into savings this time :)

Today i am going to book my last hotel in Buenos Aires and everything i needed to worry about , aside from spending cash is taken care of ... well i do have to figure out when we are going to be on the ice in Rio de Janeiro but that shouldn't be too much of a hassle . I also have to figure out this visa for Brazil and get it processed , but i might save that for tomorrow and make a trip to the consulate in person to make sure it is all good ... apparently if there are any errors i have to start the process over again and i don't really want to waste any time on that .

A couple days ago the Facebook invite for the tournament in Ushuaia, Argentina went out and i am super excited as i am quite sure it is going to be unbelievable .... here is the link for it check it out :)

The last but probably most important thing i have to do is find out if i need my Yellow Fever shots ? I will be at Iguassu Falls and i think i might not need the shot but i probably should get it .... i don't think getting yellow fever is on my bucket list of things to do in South America :)

Posted by The Travelling Goalie at 6:06 AM No comments:

Its always a battle trying to save to travel ... i mean i am already planning trips before i have left for the one i have booked and at the same time i am still trying to pay off this one :) i just have to book another hotel and i am set for South America ... but really now its crunch time and i have to save a bunch of spending cash , no doubt the best kind of cash LOL .

It's a good think i work in staging & in film ... it seems they take turns dying down , this month staging is dead and film is alive and kicking but the month before it was the opposite . Every year i plan my next year based on which months were dead the year before but it never seems to work out , you just can't really guess which months are gonna suck ... but let me tell you this much , i really hope this month ( April ) gets better because time is running out :( and thus far this month sucks big time . I just finished working on a commercial shoot but i don't have anything booked and i had a week off already this month . Today i will begin looking for work as i need to crunch some dollars into my pocket or South America might be a bit rough for me , i might have to drink only 10 beers a night then LOL !

I am already planning to travel next April as it is usually a pretty shitty month for work , i know May will be busy and June will be insane until my tournament , i will probably stop working on the 18th of June and i will leave on the 27th ... things will be pretty hectic in between those dates . It is always a bit of a stress once my trips get booked and i start to realize i need money to eat and drink on my travels ... i mean you work so hard to save and then you spend it all in one fell swoop on a plane ticket , then hotels and next thing you wait .... but during this wait time you have to make money to spend ! I am sure all will be fine . but this is the life of a freelance worker ....

The other day i met up with a bunch of colleagues of mine and we were joking about our work and how sporadic it can be then we all started talking about travelling ... i am pretty sure most of us enjoy this work for that simple reason that we have the freedom to leave whenever we want . Unlike those of you that work "real" jobs , us freelancers don't have 3 weeks off with vacation pay ... but we can take off whenever we want !

:)
Posted by The Travelling Goalie at 6:05 AM No comments: