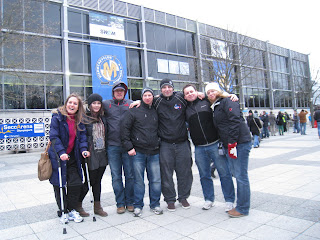 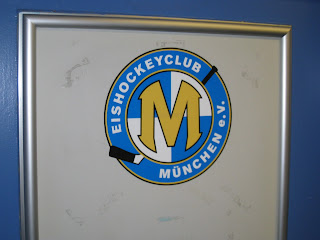 Woke up totally hung over after a night of dancing on tables in a Mexican bar . Met up with Jason and went to the market near his house and bought some gifts . Then went back to Jasons to meet Sabrina to go to Kullmans Diner for some breakfast where we met Alex ate then i had to say my good byes . Alex and myself headed to Munchen to meet the rest of my German hockey friends ( seen above ) 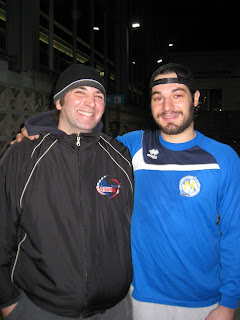 I didn't watch much of the game between EHC Munchen and DEG Metro Stars . I was too busy celebrating my last day of my trip with copious amounts of beer :) Our tickets were reserved by the starting goalie for EHC Munchen Joechem Reimer whom we all had the pleasure of meeting after the game , he was really nice took some pictures with us and gave us some signed memorabilia . Spoke with him for a few minutes as he was busy play fighting with Rainer who had some crazy stories about how they met . It was a great experience! Reimer is at the moment the second best goalie in the DEL and his club is in 7th spot which goes to show you how good he is !!! 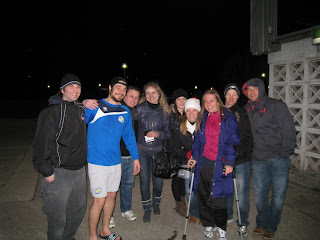 After the game the whole gang went to an Italian restaurant around the corner from the arena and i had to say my good-byes again ... this was really hard for me as i was doing my best to fight back the tears . The reality was kicking in that i had to go home and i was already missing all my friends before i said bye :( You guys all mean so much to me , there is a spot in my heart for Germany because of all of you  . Sorry i was such a wimp when i almost broke down . I try not to show people these emotions too often .... 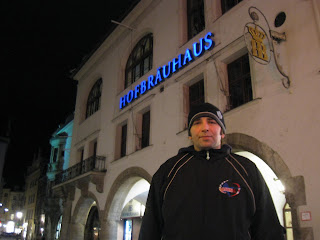 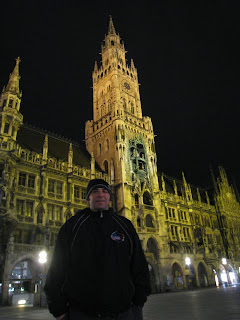 After we said our byes Rainer and myself got onto the transit (without paying LOL ) and went back into the centrum to do some evening sightseeing and some more drinking , with no regard to the fact i had to wake up early :) I have been to Munich before but have never seen the amazing architecture that i saw on this evening . The first bar we went to was the famous Hofbrauhaus which is basically Oktoberfest at a bar , with polka music playing , old couples dancing and lots of great beer ! Funny thing , there was this really old guy that was a pimp LOL he asked every girl at the bar to dance , young and old . Even funnier was that the group behind me saw my Rainman Allstars shirt which says Shithawk on the back and got a kick out of it ....ends up they were the parents of the kids on the Canadian National Youth Hockey Team which were at the first ever Youth Olympics in Innsbruck . 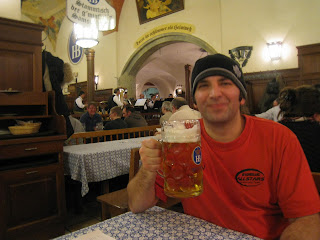 After we went to another couple bars , met some Scottish kids looking for drinks but really the rest of the evening is a blur . I think i went to sleep at around 4 AM and had to be up at 8 ...lets see how that works ?
Posted by The Travelling Goalie at 4:38 AM