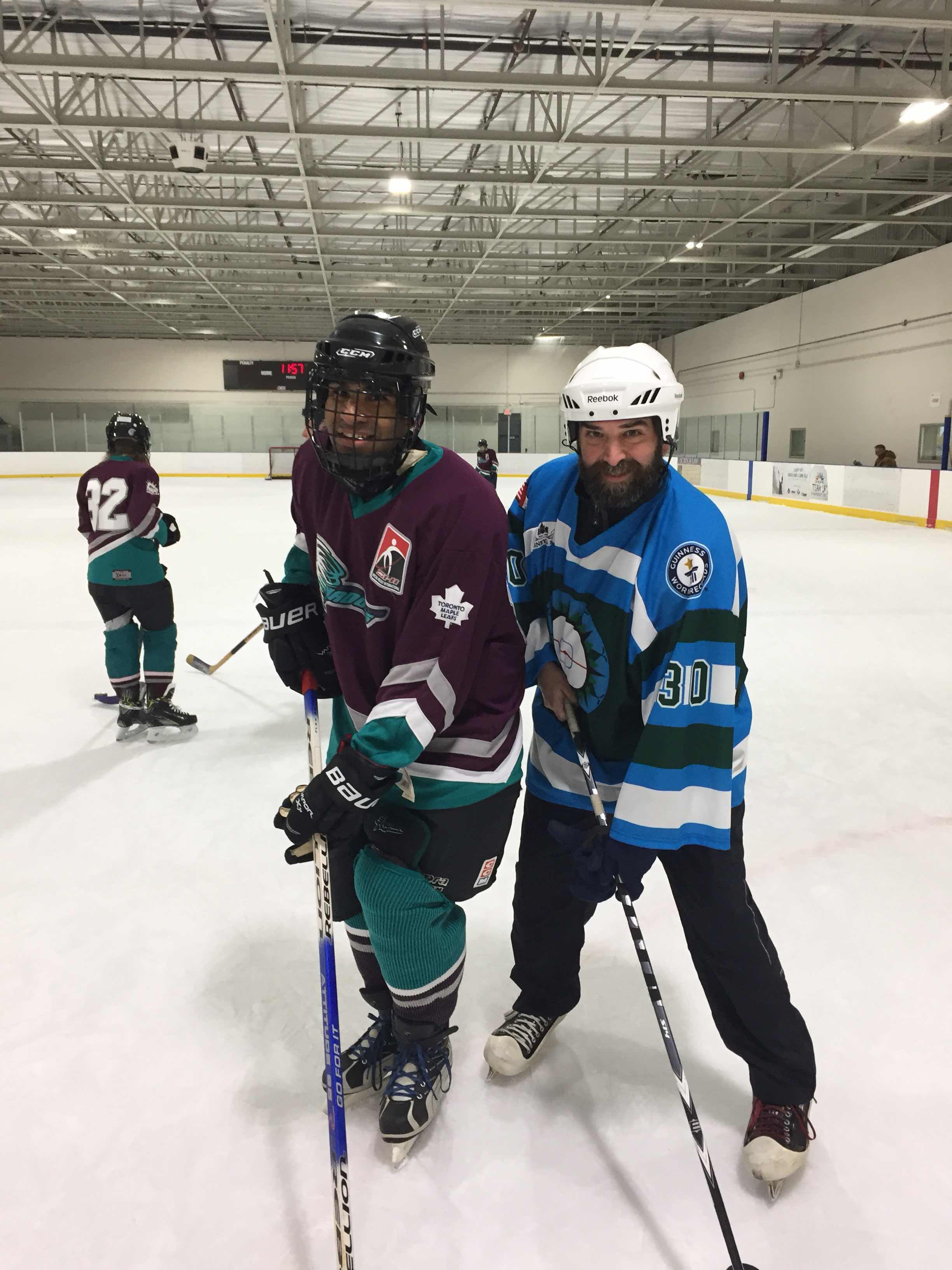 If you see the picture above you are wondering where my pads are ? Well last weekend I was invited to help out with a hockey club called the Tornadoes out at Grandravine Arena here in Toronto . One of my work buddies had asked me to go skate with them and to help out so I went last weekend and this was just after my dental surgery so I couldn’t strap on the pads so I grabbed my bucket and skates and went out to help coach a bit . If you work with me you all know who Stephen Sinclair is , he’s a great guy that is a very dedicated father . His son is autistic , not too sure how to explain this stuff as I don’t want to be rude or insult anyone so let’s just say that he plays for a team that is part of special needs Canada 🇨🇦 and that team is the Tornadoes . It is run by a group of fantastic people that really do care . Unfortunately I didn’t have the pleasure of meeting Stephen’s son as he was busy at another program that day but I hope to meet him at another ice time . 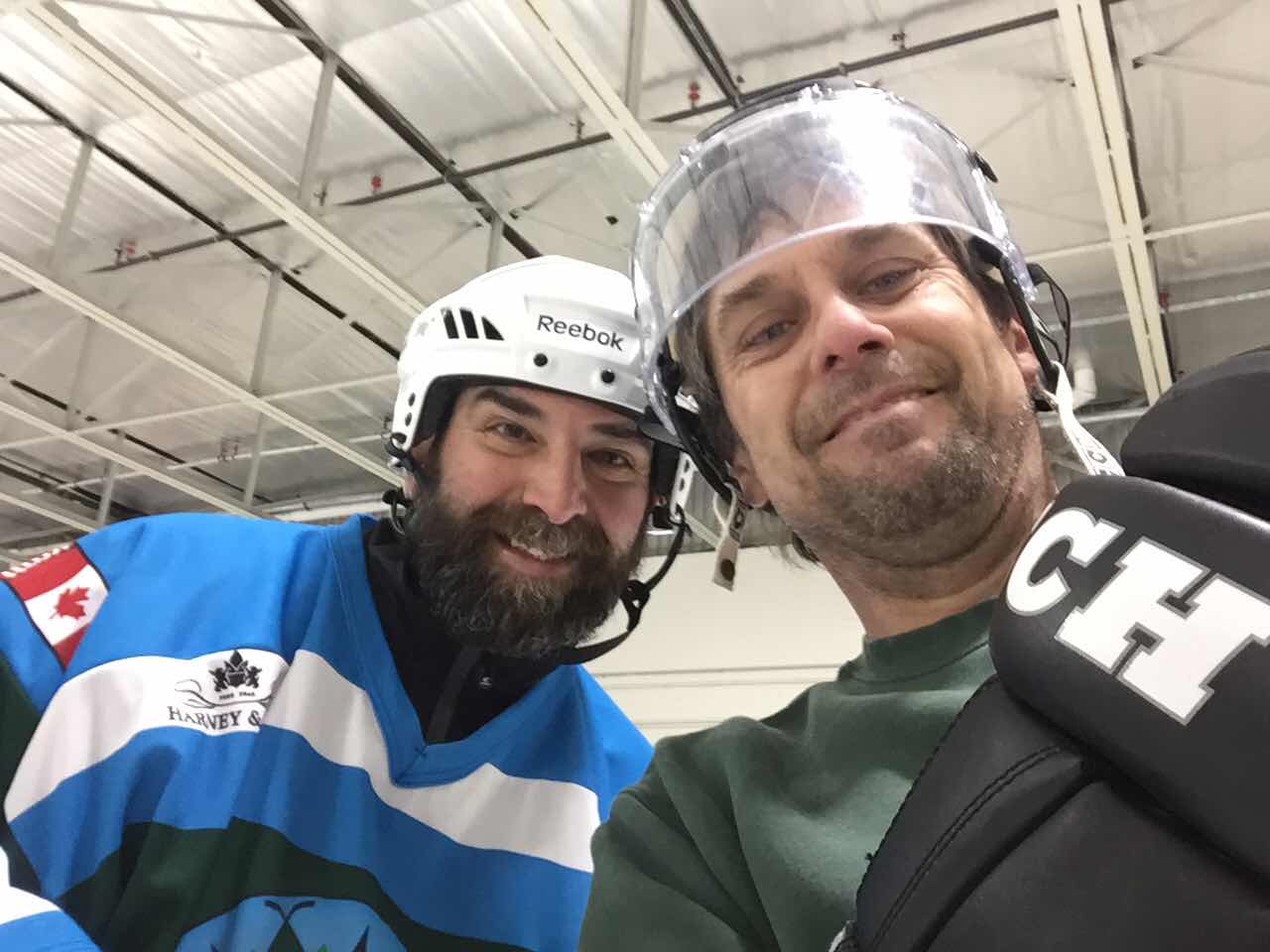 When I got to the rink there was a game on already and everyone looked like they were having a hoot ! And then Stephen showed up and tried to scare the pants off me with a sneak attack while I was standing there nervously thinking what do I do here ? Honestly I have never worked with any special needs kids so this is a learning experience to me . I was nervous , seriously . But once he showed up he made me feel better and I followed him into the room where all the kids were and their parents were all there helping out . I was introduced as The Travelling Goalie and felt a bit like a celebrity lol . Don’t worry I didn’t let it get to my head :) I strapped on my skates , put on the helmet I have never worn and threw my Hockey Foundation jersey on which I wore in that world record attempt game in India and grabbed the stick I had and yeah .... it felt weird not being in pads . When I got on the ice I immediately was draw to a fella named Brian , my new hockey buddy that I skated with and passed the puck to for an hour . There were a bunch of other volunteers there having fun with the guys and gals and honestly it felt good being part of a group of people that were doing something that wasn’t selfish . Lately I have met a lot of selfish people and they have made me feel bad about humanity and this was much better for my soul . 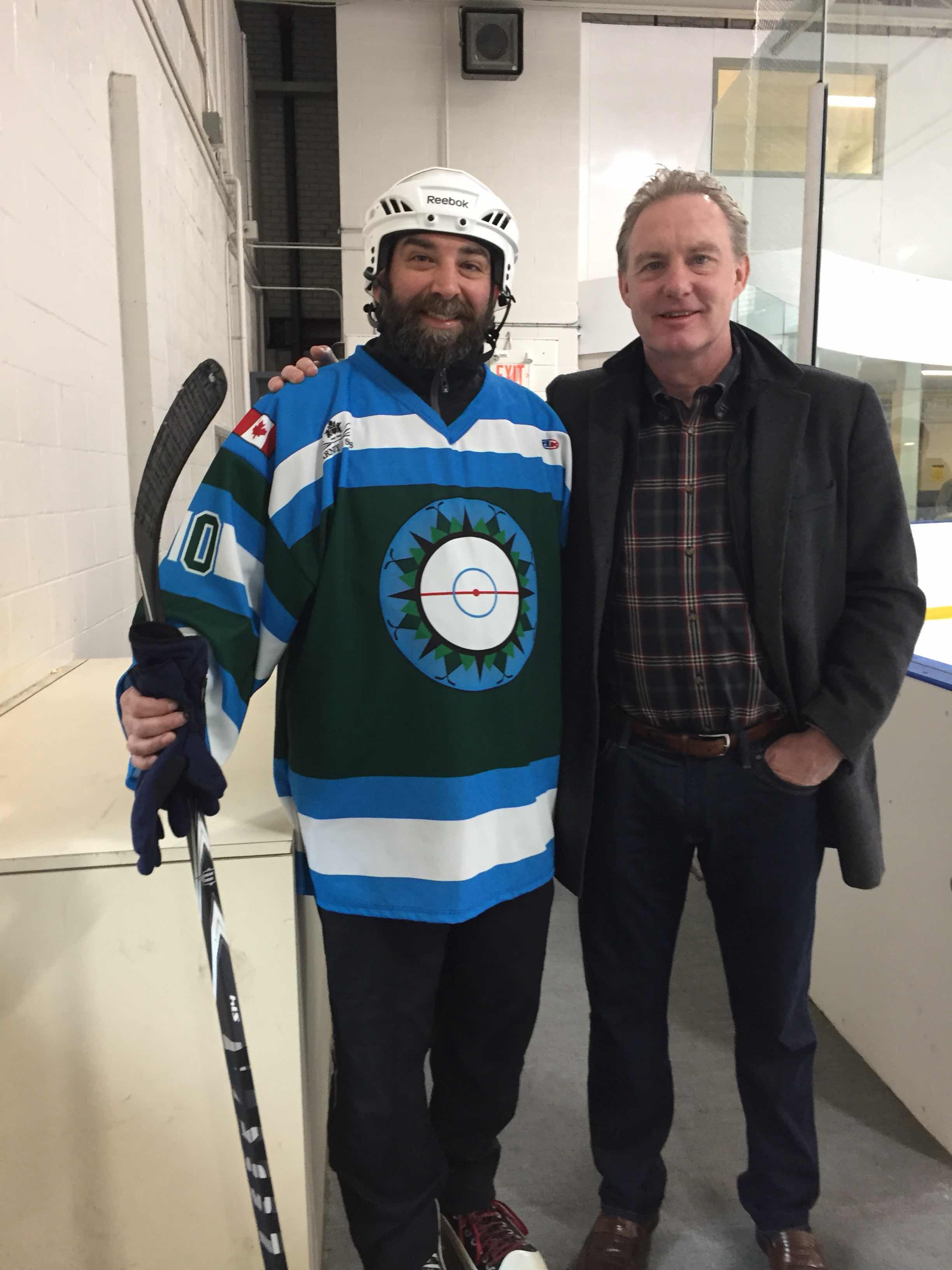 It was my lucky day because former NHL player Pat Flatley was in the building and one of the organizers mentioned me and he wanted to meet me so during the ice time he came over to the boards and I was called over to meet him . He was there with a bunch of gifts from what I assume is the NHLPA for the gang . We spoke about my travels and he shared some stories about knowing someone who tried to build a rink in a foreign country and the difficulties involved . That rink was never built unfortunately :( while this was happening Brian was calling for me and I got my picture and headed back to the task at hand . A few of the volunteers had mentioned that Brian was very responsive with me and that felt good to know I actually contributed especially coming from the volunteers who are there weekly . 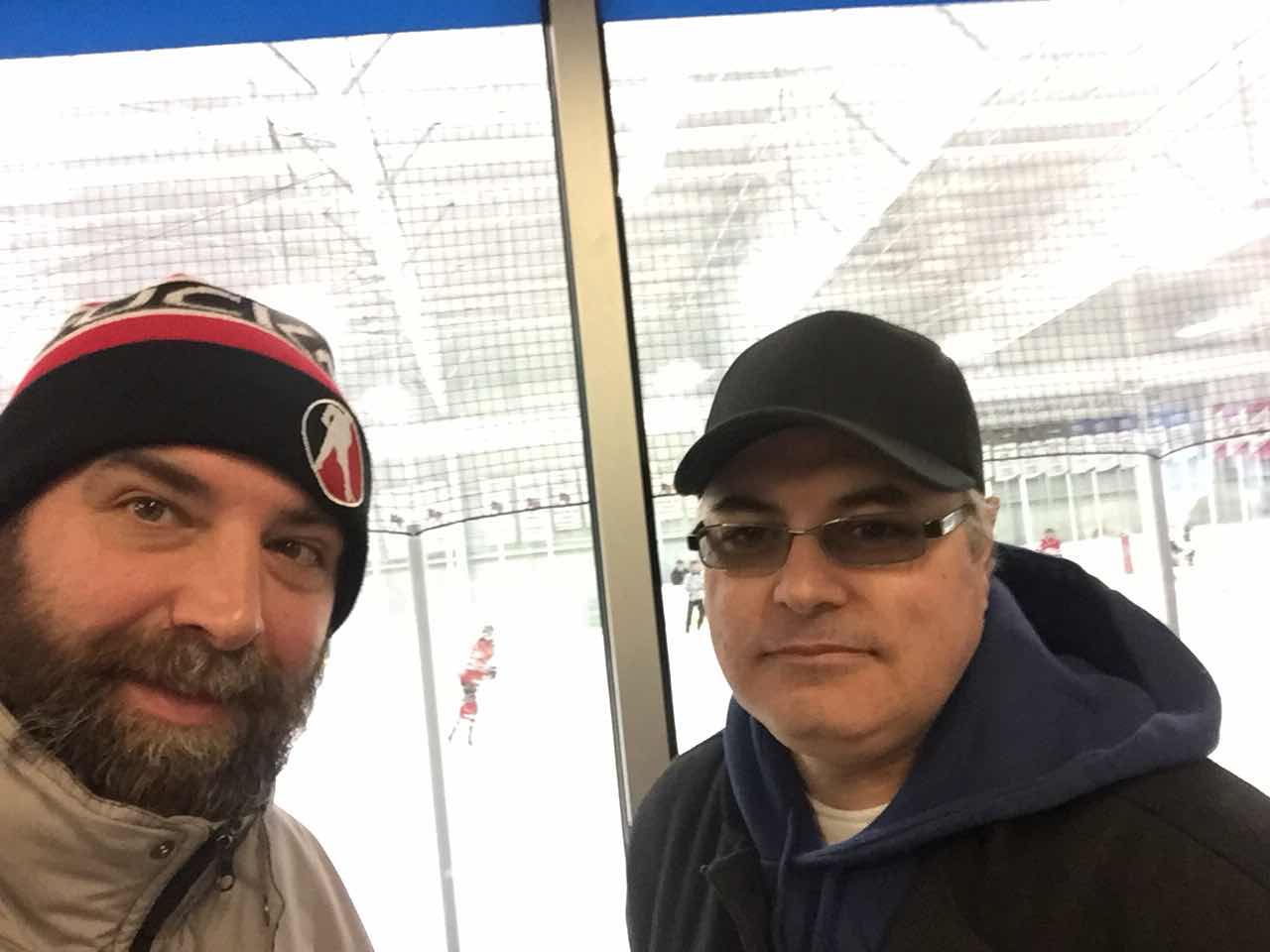 I had to rush after our ice time to pick up George da Silva who lives near the rink so we could go meet and watch the national women’s team from New Zealand they go by the name Ice Fernz ( https://www.facebook.com/IceFernz/ ) ! If you didn’t know George runs a page called National Teams of Hockey ( https://www.nationalteamsoficehockey.com/ ) and we both have a good relationship based on our love for international hockey . Unfortunately there aren’t many of us or there are t many that I know of here in Toronto :( we drove out to Leaside Memorial Arena on the east side of the city as I was told they would arrive by 1 pm .... things don’t always go as planned so we watched some other women’s games and chatted about hockey of course . 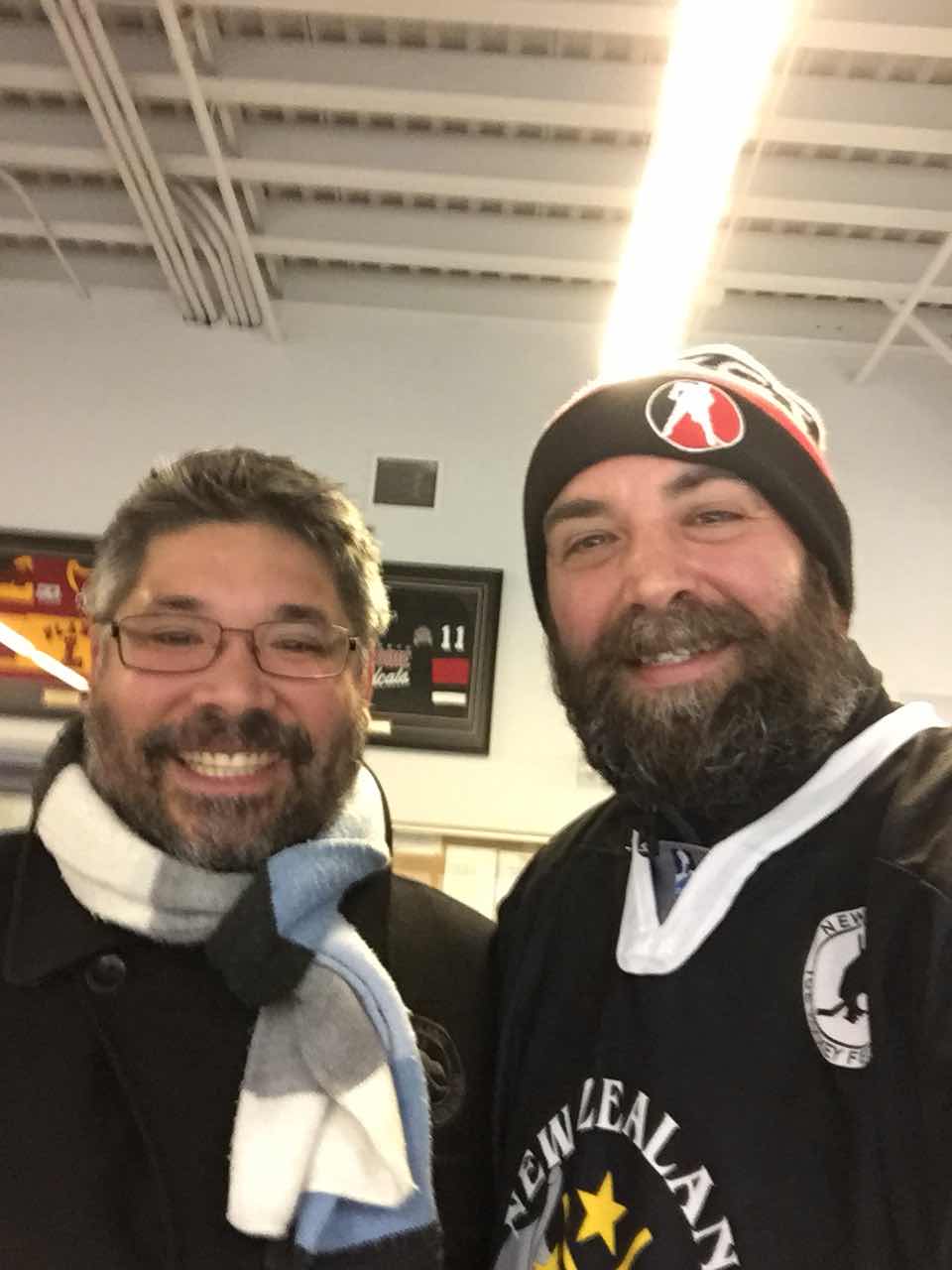 My main aim out of this was to meet general secrearary for the federation from New Zealand .... Dr. Jonathan Albright who also knows my buddy Adil El Farj who claims he is a Habs fan .... truth be told , he is a double agent lol ! Sorry Adil :p he is here with the women’s team as they are tuning up for the IIHF women’s world division 2 B tournament in Spain . I can’t thank you enough for the amazing gift basket you gave me . Love the jersey so much !!! We hung out with Jonathan and watched the women play a team called the Brampton Canadettes . We met their former coach and current goalie coach and I wish I took more notes so I’m sorry for not remembering names and I’m the end the Ice Fernz lost a close game 4-1 which was closer then the score shows . The women were winless on their trip here and battled illness and a tough schedule in preparation for the worlds which they are currently competing in . I wish them all the best of luck and I have watched one game and will continue following and watching this week . After the game we said our good byes and I am pretty sure I will see you all in New Zealand next January ! Yes that’s the plan :)  I dropped George off at the ACC to watch the Leafs and I went home .... 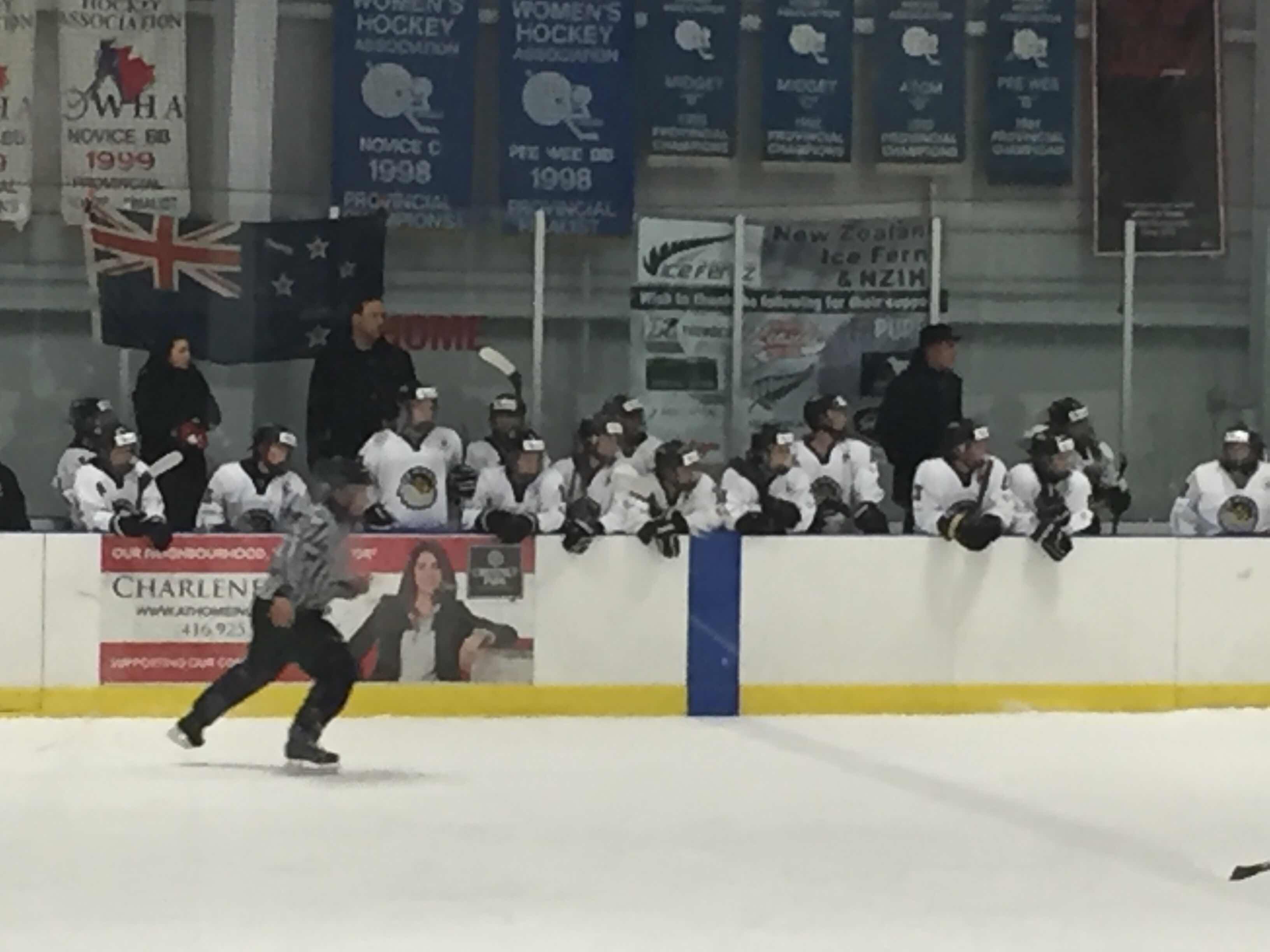 As I said in the title of this post .... this for me was a very special day ! Before I end this post I want to apologize to Stephen for not showing up this past Saturday :( I went to the gym and had my mind on my semi final game that I had to play that day and it totally slipped my mind until I left the gym .... I will be back if you invite me again and I am hoping that more of our friends will come out to lend a hand in the future . If I can do it so can you ! And I’m gonna do it again .... especially now that my team was elimnated :( seems like I have no weekend hockey for the next couple months .