Let me begin by saying Halloween here in UK has nothing on Halloween in Canada . As I mentioned a couple days ago that people don't take their kids trick or treating on Halloween ??? They take them on the weekend randomly before it , yeah so over 3 nights you might get a knock on the door .... This makes no sense right ? Aside from children in costumes I haven't seen any adults underdressed in their sexy costumes or anything .... Also the fireworks blending in with it all which are being fired around for Dawali makes it all interesting and all but totally different . That being all said some people get the spooky stuff :)
My day yesterday started with me and my friend who i can't mention going for breakfast after getting a ride in to Cookley from Steve Woodward to pick up a car that was left behind for good reasons . Nobody should ever drive drunk !!! When we collected the vehicle we went into town for breakfast at AJ's which they forgot to make our food then made us extra which I couldn't finish and the food hit the spot . My friend that I can't mention then drove me back to where I'm staying out near Bearwood and I took a nice nap before meeting Ritchie and Amy . They just came back from spending a few nights at the ever so haunted Jamaica Inn :0
First pub we went to was the Sow & Pigs which had some lovely ales . Yes I'm drinking again hahaha ! Amy told me they had quite the experience at the Jamaica Inn ... She felt something sit on their bed in the middle of the night and also saw some shadows moving . The next morning the power was out only in their room ... Room 109 has had this phenomena before apparently too ... Spooky eh ?!?!? Not too sure if Ritchie believed but I did . Yeah I'm into this stuff and hopefully I can convince Kathleen to do a night there someday . After a few pints we headed to the Red Lion for some curry and to meet Karl and Damian . 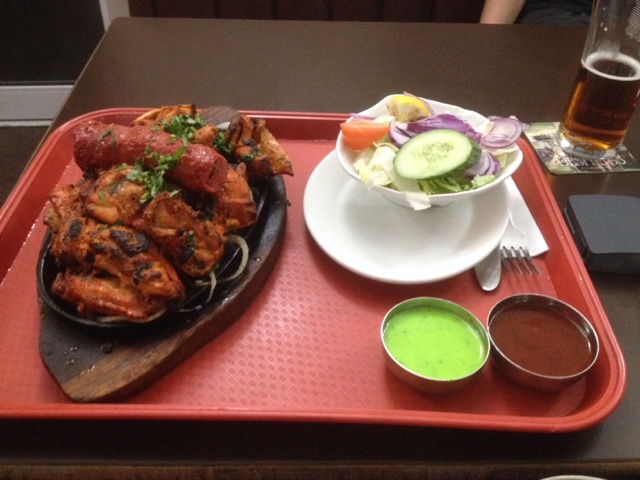 See that pile of meat ? That was my order of food ! I know , I didn't order that much did I ? Well for £8 that is what you get , and they do offer take away containers after also hahaha ! I needed one :) I think I ate half of it as its a lot of protein for one sitting . None of us finished our plates and we all took home containers except for Damian who must have a bottomless pit for a stomach . How the heck you are that all I will never know :)
After we got stuffed with curried meats we all heads home . I went back to Karl's and walked back the 25 minute hike to walk off the food and see if there any ghouls running a muck but unfortunately there wasn't :( when I got back Elaine was awake and we had a chat about ghosts . She has some pretty spooky stories that kinda spooked me too . Some about people being pulled out of bed and having pillows pushed into people's faces . Creepy stuff made my night a bit more interesting . Now I'm not sure if I want to sleep in the dark hahaha :( maybe I should pick up a night light tonight ? Trust me if something touches me tonight I will be running through walls . Elaine made me more comfortable when she said this house has no spirits but the mind plays games when you want to believe things but honestly this place is really peaceful so I believe her ... As much as I love the stories I'm not sure if I could handle having an experience with a spectre of any sort .... If you have any ghost stories feel free to share them in comments . I would love to hear them :) Happy Halloween !
Posted by The Travelling Goalie at 4:17 AM