In all my life i have never ever been to Ottawa ... i know , its crazy eh ? Most people where i live go there growing up with their schools . I must have skipped that day to play hockey . So it's kinda exciting to go to the capital city of Canada to play some puck but really the most exciting part will be skating on the Rideau Canal . Yeah it's something everyone should probably do once in their lives . How crazy will it look when i go skating down the canal with my gear on ? will there be any pickup games that i might be able to find and will i be the hero that gets praised for stepping out there in my gear ? Usually when i do go play outdoors in Toronto ( which is super rare ) i get praised since they never have goalies to shoot at LOL ! Since I've never been to Ottawa i can't say first hand but i would be surprised to see another goalie on the Rideau ... kinda hope to be surprised though :P

Only spending one night in Ottawa then heading to Montreal to hang out with my Moroccan buddies . Looking forward to seeing Adil again and eating good Quebecois food like mounds of poutine and smoked meat !!!!! Yup there goes the diet . Oh well .... and these Moroccan dudes know how to eat hahahaha . Looks like i might be able to burn off all that food with all the hockey I'm gonna get out there ... i should probably go visit my buddy at Toronto Hockey Repair today to get my gear fixed up a bit , it's falling apart and its' just about time to get some new stuff .

Well i better get going , gotta work ! .... but i would rather be playing hockey LOL .
Posted by The Travelling Goalie at 6:14 AM No comments:

We Lost Another Good One :( 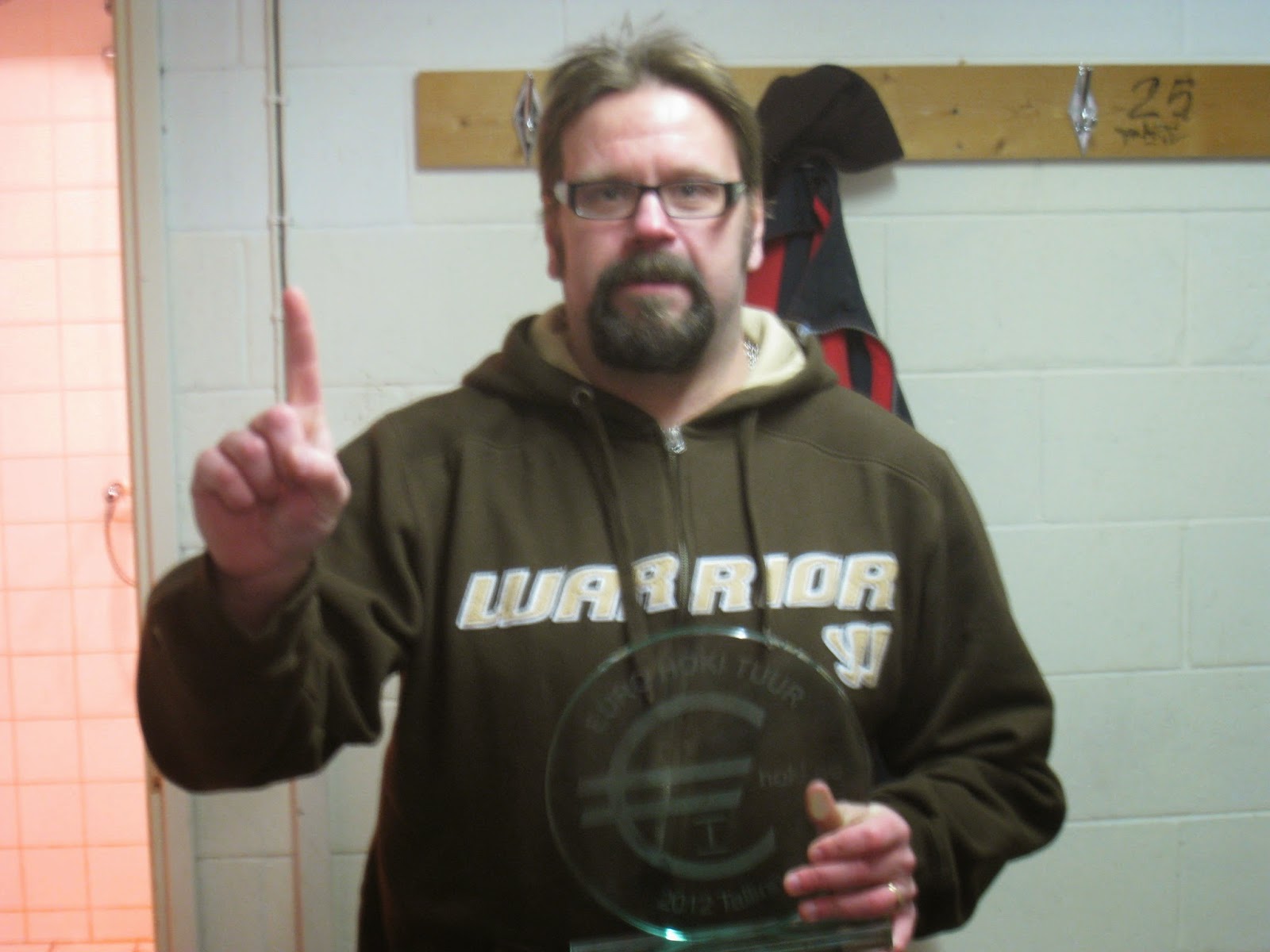 Its with much regret that i write this blog :( Back in 2010 i was tripping around Europe with Rainer and we went to Finland without our gear for a hockey party for this guy named Petri Riihelainen . He ran this hockey team full of crazy Finns that travel around the world playing hockey ... back in the day they were called the Nokia Ice Devils but i am not sure what they are going by these days . Really that was an awesome trip and i made a lot of great friends just like every other trip but on this trip when i was in Finland i met this great guy named Kalle Valitalo well actually i met 2 Kalle's as Petri's brother is Kalle also so this Kalle we called Crazy Kalle . 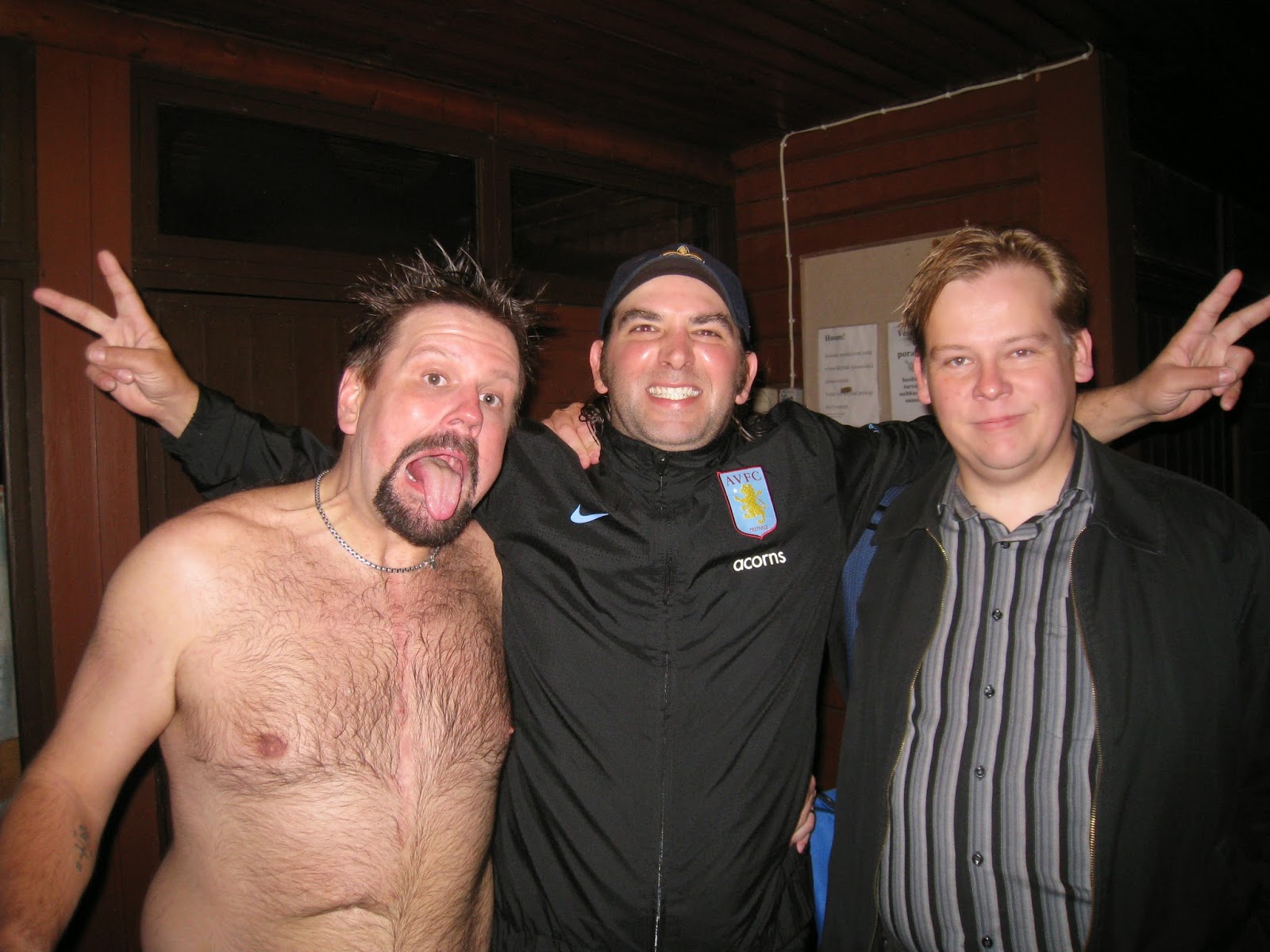 I knew the minute i met this guy that he was a proper hockey player , beer drinking fun loving guy that looked like a big Finnish bear . We met outside the sauna at the party , yes everything in Finland includes a sauna ! One of the first things Crazy Kalle asked me was which NHL team i cheer for and i told him of course the Leafs and he squeezed the shit out of me LOL ! There was a lot of drinking that night and of course we stayed in touch until our next meeting .... 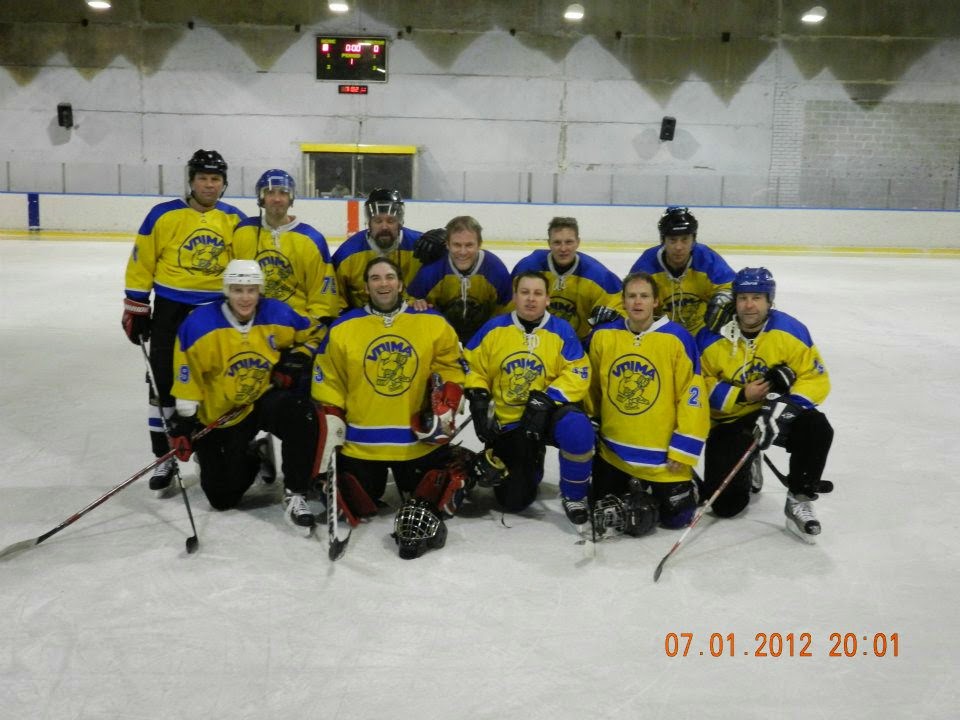 In 2012 we met in Estonia to play for the Rainman All-Stars and that is where we became eternally team mates . You know that when you win a championship with someone you will always remember them and will always have that connection and that is exactly what we did in Tallinn . We beat a semi pro team to win their tournament there and then we had to say bye ... yeah i know you are wondering , this can't be it right ? No there is much more :) While we were in Estonia it was Kalle's birthday and man that was insane ... 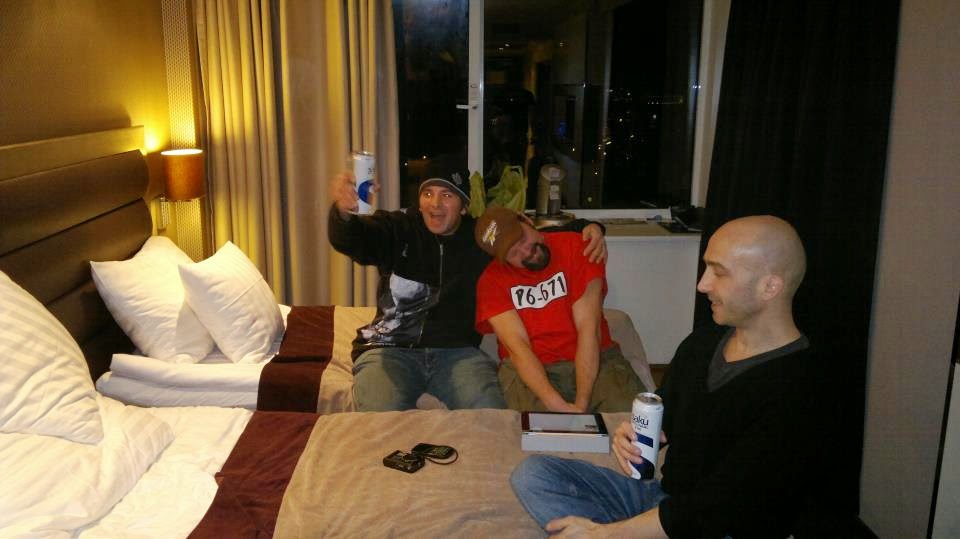 Of course i can't really get into too many details because i don't remember half the night but i do remember running out of alcohol at the hotel and Kalle (on his bday ) wanted to go to a store to buy more so i offered to go with him . On that walk we yelled vulgarities in Finnish that he was teaching me , we laughed our asses off and made fools of ourselves ... when we finally got back to the hotel after getting lost we went to the wrong room , actually we went to a few wrong rooms LOL ! I will always remember those moments that night where we really bonded ... 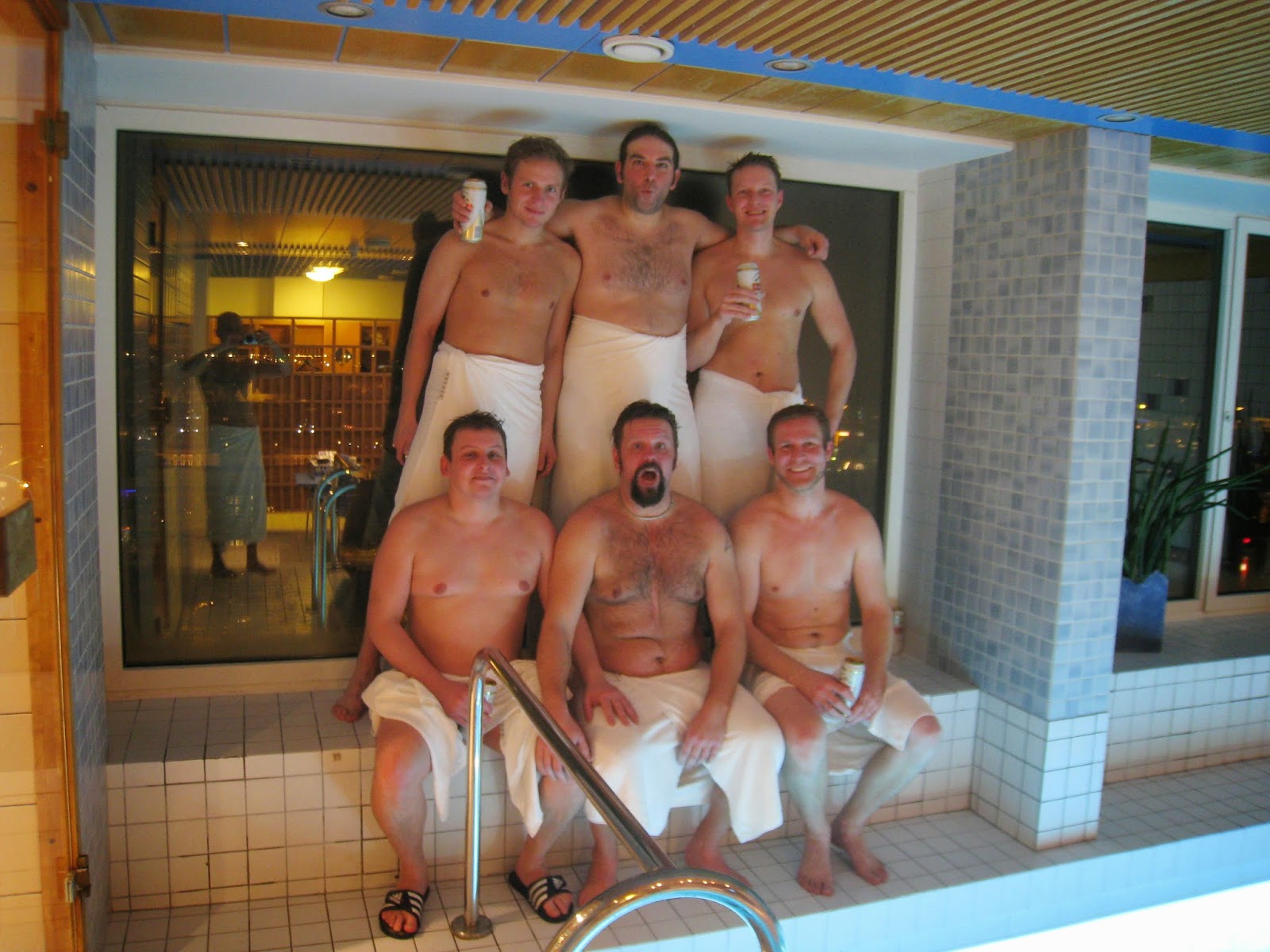 It is with great sadness that we had to say bye to Kalle this week ... buddy wherever you are make sure to organize a game for us for when i get there ... Go Leafs Go !


Posted by The Travelling Goalie at 6:50 AM No comments:

Sometimes things fall into place without much planning .... yesterday a friend from Russia (Max Amhel) that organizes hockey trips messaged me about a tournament in Kosice,Slovakia which just so happens to occur the week after Rainer's tournament in Tachov,Czech Rep. The crazy thing about this all falling into place is that i really wanted to plan something for Slovakia and now blam! it's happening :) As usual i have not booked anything yet as everything is tentative based on things popping up ... Kathleen is now joining me for a portion of the trip and Timo is not joining me in Antwerp so that leaves me constantly re-arranging logistics . So with Kathleen joining me i won't be able to crash at anyone's place , so hotels it is ... and with Timo not coming to Antwerp , that means i am not flying to Germany first and instead left looking for a flight from Belgrade to Antwerp or hopefully Luxembourg ....

Which brings me to my next problem ! Does anyone have any contacts in Luxembourg ??? Surely i can organize to get on the ice just once before or after this tournament in Antwerp ? At the moment my schedule looks like this :

The dates that have the ???? beside them are dates i can easily find my way to Luxembourg to play ! Someone please please help me get on the ice there :) Actually April 29th i think i might have to be at Rainer's tournament in Czech Rep. As you all see this is planned to happen in 2.5 months and at the moment everything aside from tournament dates are all set LOL! Planning these trips is just madness sometimes . There is always a factor involved that can always change everything in the blink of an eye !

Pretty sure I've mentioned before that booking flights and hotels early may save you a bundle of dollars but at this point if i did that without paying the extra insurances i would probably end up paying more for cancellations and altering dates etc... Kathleen is kinda stressed by this but the bottom line is i probably won't be able to consciously book anything for at least another month . Its always good to leave your options open :) If i would have booked the flights already then i wouldn't be able to consider playing in Slovakia .... i have never played for a Russian team so it would be very interesting to say the least . If everything goes/stays as planned then i will play in 4 tournaments in 4 different countries in 4 consecutive weekends and get on the ice in at least 6 different countries in that time .... really hoping to get that Luxembourg flag on my bag ! and there is always the chance of skating in Germany when passing through ...right ?

Anyways i should get back to work ....
Posted by The Travelling Goalie at 8:56 AM No comments: