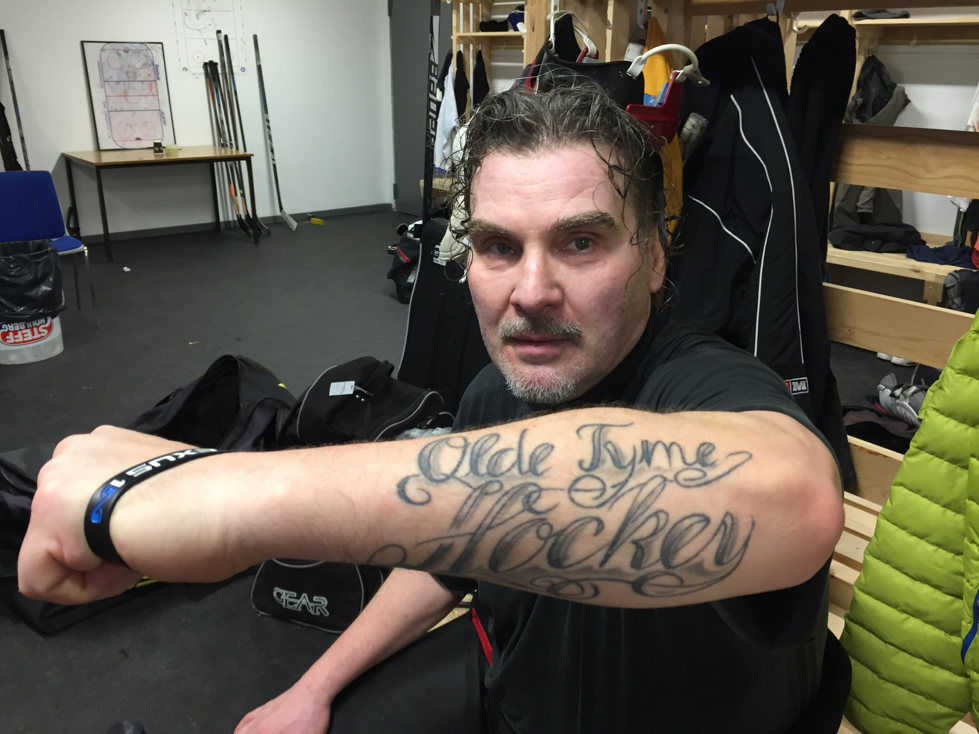 Woke up feeling refreshed and ready to go play 3 games for my team which is the Rainman Allstars . This tournament is in Fredrikshavn , Denmark 🇩🇰 at the Scanel Arena which is a nice complex with two rinks . One is considered a practise rink . There are also rooms to sit and eat in and the dressing rooms are nice and big . The tournament is comprised of 8 teams in 2 groups and the round robin of 3 games decides which teams cross over for placement .... so winning all 3 games should get you into the tournament championship . The games are 2 - 20 minutes run time periods and there is food provided at the arena for all the players between games . This tournament is very well organized by the Fatboys Hockey Club who are a local club . Most of the teams are staying in the same hotel called Hotel Lisboa which is about a 5 minute walk to the arena and we are able to leave our bags in the dressing rooms over the weekend which makes life so much easier . As I said this tournament is very well organized ! 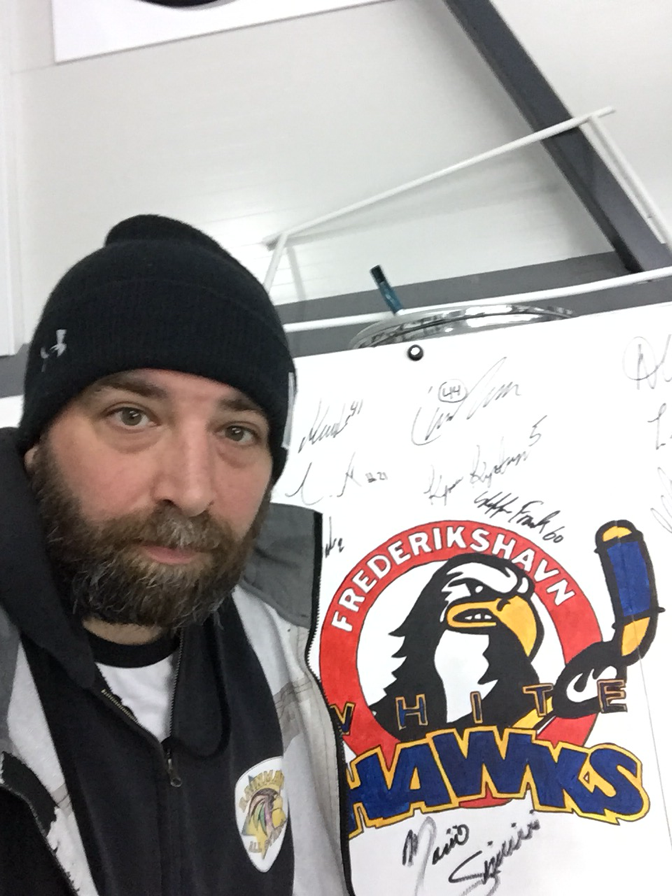 Our first game was against a club from Norway 🇳🇴 by the name of Idda Hockey . We watched them practise last night and they didn’t really impress me aside from their little speedster who I knew would be a bit of a pest :) he’s not a bad guy but on the ice I knew we would have some contact in my crease hahaha . The game went really well for us as we went up 4-0 by the half . When I skated over to the bench someone said I will have a shutout !!! NOOO !!! Don’t every jinx the goalie , omg 😲. That first period I might have seen 3 shots and when I went to switch ends I found out that the teams don’t switch sides after periods which is a bit odd but it’s not a big deal . The goalie for Idda was pretty good down low and his main problem was that he went down early and I let my team mates know that they should start shooting high on him and that’s when the flood gates opened up . This was obviously before the half and in the next period Idda came out strong and got a few nice wrist shots on me .... oh yeah no slap shots in this tournament . They did score a goal on a shitty play where we coughed up the puck in our end and that was bound to happen after being jinxed :( I didn’t moan or complain as we went on to win 8-1 and then went back to the dressing room for a shower before watching our locker room mates the Lunenburg Night Hawks with my good friend Karl McNelly play against our next opponent which is the host team Fatboys . If you read my blog you will know Karl is an old buddy from Toronto that now lives in Birmingham and usually has me staying over at his place when I’m there . So happy to spend some time here with him but first let’s see how our friends donin their game . 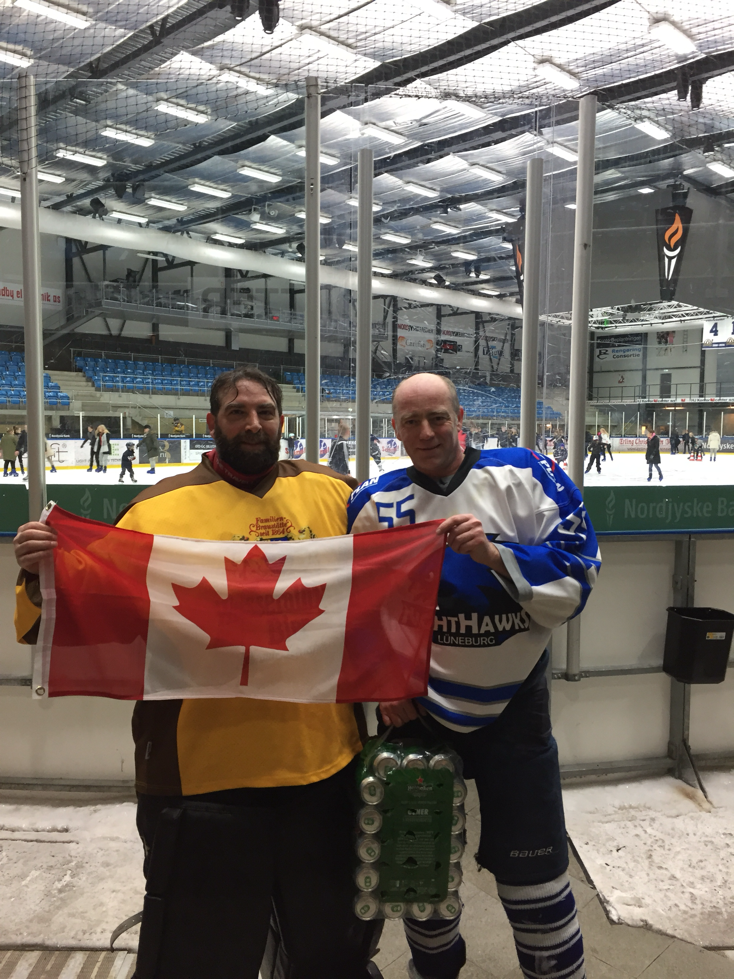 Well they didn’t do so well but my buddy Karl stood his ground and played his heart out even though they went on to lose by the same score we won by and I knew watching this game that our match vs. Fatboys should decide which team goes to the championship game . Between games we went into town which was a ghost town and apparently for some reason or other all the shops close for siesta here ???? Weird as it’s normal in southern countries with the high sun but here ??? Ok well we all struck out looking for a tourist shop to buy magnets or patches :( hopefully the town is more lively when we hit the bars and clubs tonight after our players party . Back to the rink to face the Fatboys . 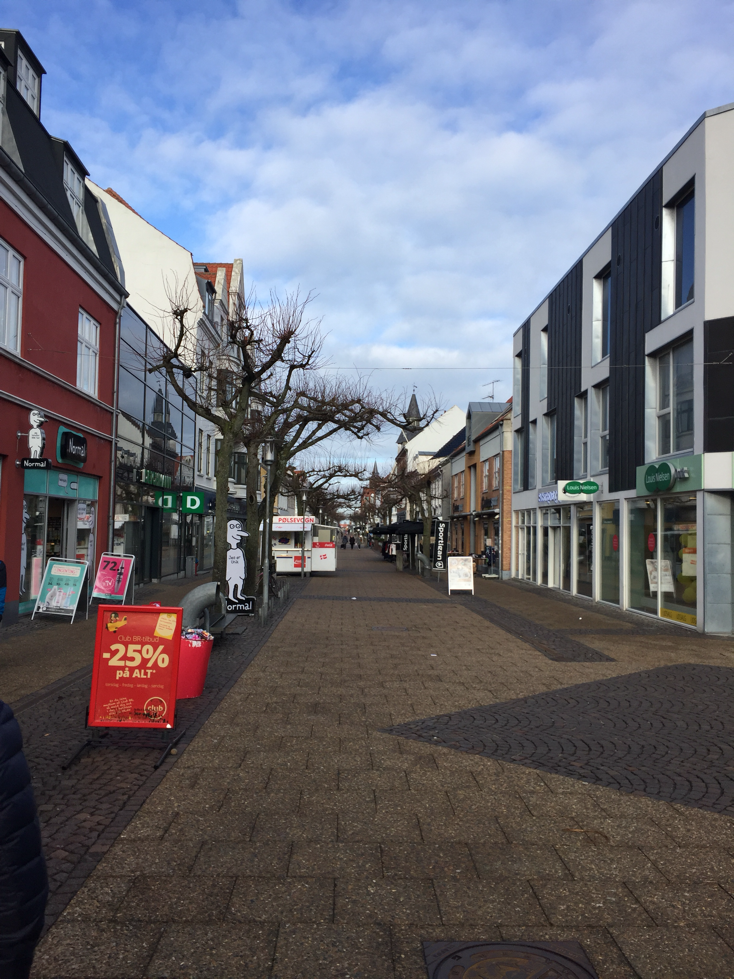 When we hit the ice there were no pucks for warmup which is ok since we’ve all played a game today and I’m feeling pretty warmed up . I was a bit nervous as I wanted to win and go to the championship game . The Fatboys came out strong and I made all the routine saves a goalie should make and my positioning was great . My team mates played really well and we went up 2-0 before the half and even with a lead you know the home team is gonna come out firing on all cylinders and they did .... they broke my shutout in a very odd fashion as there was a scramble in my crease which lead to Bruno aka Yak Shit for his lovely scented farts diving into the puck and gloving it into our own net .... now before you blame poor Bruno you have to know that the referees blew the whistle before the puck crossed the line so this 100% should have not been a goal and in fact if you ask me it should have been a penalty shot since Bruno did put his hand on the puck in our crease ..... the referee even agreed but somehow still called it a goal . I didn’t get upset or anything and in fact we responded with another goal before they potted one on me that I probably should have had . The score ended up 4-2 but not before some exciting action in our end .... gotta hand it to the Fatboys , they played a great game . Flemming is their coach and is one of the tournament organizers , he is a Leeds supporter and we got on well with our love of English football , after the game he had a great comment when he said your chest is a target that we kept hitting . I said it’s just great positioning and we both laughed . 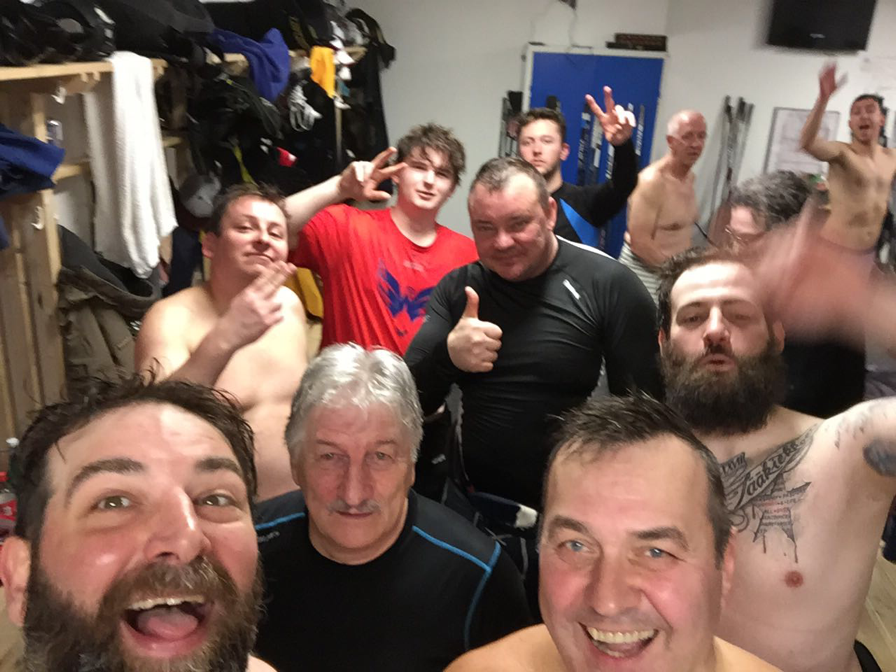 We were all really happy after the game and headed back to the dressing room knowing our fate was in our own hands and that if we tie or beat our friends and dressing room mates the Lunenburg Night Hawks that we would earn that spot in the final . After we hit the showers we went to eat and chilled out . The Night Hawks won their second match over Idda Hockey 1-0 in a close game . Their goalie who has only been playing for a couple years played awesome 👏. Let’s see what happens next as we are losing two of our skaters who are actually Night Hawks but have been playing for Rainman Alllstars and were even in India with us .... Andreas and Stefan ! We are now down to 8 skaters and I know a few of the guys have probably drank enough beer to make this more interesting . 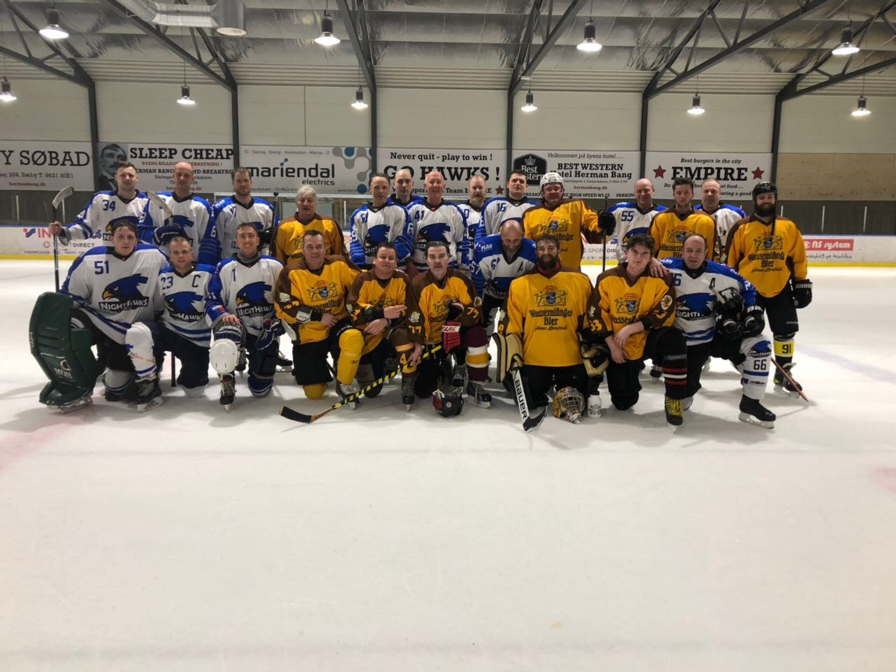 We had to play on the practise rink which is much darker and the mood there was not the best . When we hit the ice my team mates seemed to take the game really lightly and we actually played garbage hockey compared tom our first two games . I was a bit stressed but then we scored a goal to go up 1-0 and soon after the Night Hawks struck back to tie it up 1-1 .... all I’m thinking is that if we lose we may blow that spot in the championship due to +/- and that would be a nightmare come true . Rainer turned up the jets and scored us a goal then we got another to go up 3-1 but we were not out of the weeds yet as we gave up a penalty shot because of some lazy play :( I thought they would let Karl shoot on me which in my mind is added pressure but instead their captain took the shot . He came in and went across the crease and tried to get a backhand upstairs but didn’t get much on it and put it into my pads while I slid across the crease . We went into win the game 3-1 but we were outplayed and outshot which was pretty bad considering the players we have on our squad . Night Hawks really played to win and deserved more then what they got but it was a good game and now I can say we have booked our spot in the championship game which we have no clue who it will be as there are two games to be played tomorrow morning . 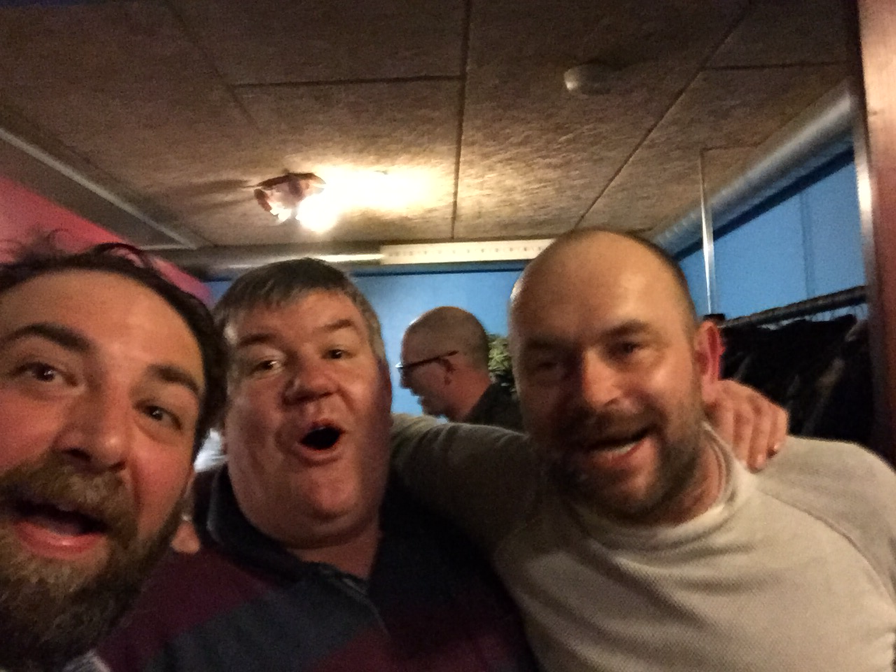 We started our party in the dressing room where I must have had 5 or 6 beers before heading over to the hotel to change and take taxis to the tournament party . When we arrived we had the best seats somehow ? Closest to the bar and food area and best of all we were in perverts row for the strip show .... yes there is a stripper here hahaha ! Boys will be boys :) the food was great .... beef and chicken with potatoes and salads . All you can eat too , there was plenty to go around . The jagerbbmbs started flowing and I’m pretty sure I blew all my Danish Kroners there .... I had about $100 cdn which is 500 kroners but nothing is cheap in Denmark . To be fair they were selling liquor and beer at much cheaper rates then the Irish pub I ended up in . Remember I mentioned a stripper ? Yeah I didn’t see her as I took a nap during the show .... I wish I was joking as everyone laughed at me for taking a nap in perverts row lol ! Oh well I’m sure I didn’t miss much ? When I woke up we jumped into taxis and that was the last time I saw most of my team mates . When I got to this Irish pub I saw a guy fall down backwards like a tree getting chopped down and the bar didn’t call an ambulance when he wasn’t responding .... they dragged him by his arms on the floor to the other side of the bar where who knows what they did but I never saw that guy again !!?? I guess hey didn’t want to be responsible for serving him so much alcohol or something . Things got a bit crazy in there as one of my team mates who I won’t mention his name did some crazy things .... poured a full pint onto his own head then he tore his shirt off like Hulk Hogan and flung it onto the dance floor as me and the Aalborg team watched in amusement 😳 before we left he attempted to eat a cigarette and it was time to get him back to the hotel . It was around 3 am when we got back to the hotel and I’m praying everyone is ok for the finals tomorrow . What a crazy night ! 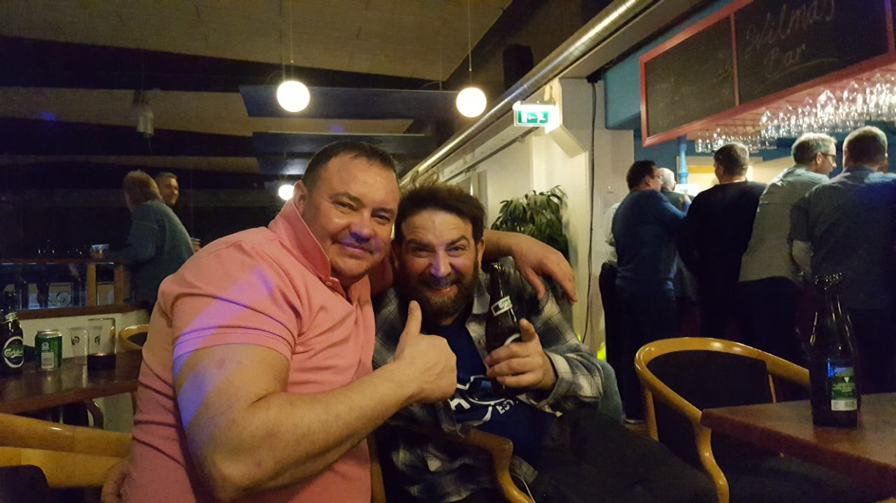 Posted by The Travelling Goalie at 8:16 AM