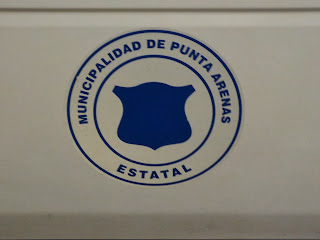 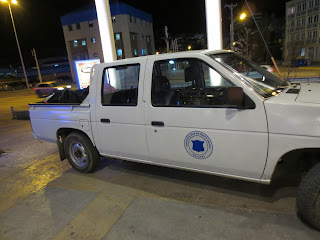 This has been a long time coming so here we go . Sorry for the delay been working like a dog lately trying to save up for my next adventure :) We were going to Chile to help them promote the game of hockey as they had just built their new arena there way down south in Punta Arenas ... way way way south , the flight was like forever LOL . I was put in touch online with a fella named Alejandro Trabas aka Bon Jovi . When we acquainted ourselves i suggested he put together a tournament and that he did plus so much more . We were told the mayor and the city would be fully involved and they came through with flying colours from the second we landed . Our chariots were waiting for us with city workers and the mayors assistant . Before i go any further into this and i may do this a few times , i would like to thank the City of Punta Arenas , Chile and Emilio Bocazzi for the unbelievable stuff they did for me and my friends . 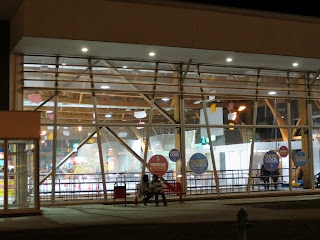 We did not meet the Mayor on our first night but we were totally amazed at where he put us to stay :) We were guests of the mayor at Hotel Casino Dreams . When we arrived there we were told we just had enough time to drop our bags as we had to get to the arena for our first skate . This was the moment of truth ! The arena is called Pista Cool Center and it is in a duty free area as Punta Arenas is a huge port city ... i have personally never been or seen such a big duty free area , its not just 1 building hahaha . The name of the duty free area is called Zona Franca , i wish i had more time to go shopping there ( maybe next year ) . Punta Arenas is not exactly in a warm area of Chile , don't be fooled this is way down near Antarctica !!! 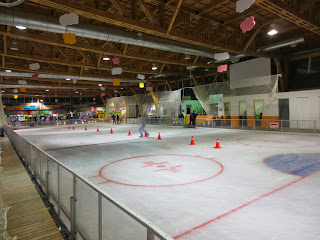 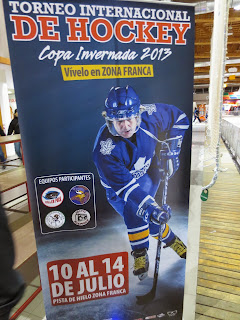 We got to the rink , it was small but good enough for 3 on 3 hockey . The ice looked a bit rough but generally the conditions were much better then the other rinks we had encountered in South America ... the fact that it is a cold climate helps . The rink is not even a year old but you could tell they have a tough time maintaining the corners and they could use some glass above the boards . This is also why we are here as we really want to help Alejandro and the other guys we met there ... mainly getting people interested in the sport and getting that interest to translate into them getting better equipment , better facilities and hopefully some day a bigger rink . All the guys there were so happy to meet us and we could already feel as though we were going to receive the celebrity treatment . Alejandro told me to be ready but for this we were not prepared as the guys were so helpful from the start , these guys really want to learn and really want to make this sport stronger in their community . There is some real passion and i could tell before i even got on the ice with them . 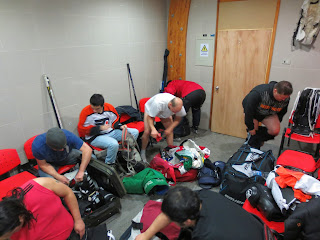 They are lacking dressing room facilities but this is normal when travelling to unconventional hockey countries , at least they have 2 rooms that can be called changing areas . We got our gear into the room and got dressed and ready to skate , obviously i knew that most of the guys had only been playing for a max of 1 year and that we would have to help these guys get better in preparation of our trip to Ushuaia as we will become members of the first Chilean hockey team to travel to an tournament outside of Chile , first thing is first though ... we were in Chile for this monumental tournament there also and there was so much to happen that i , you , or the other guys would never have guessed would happen . 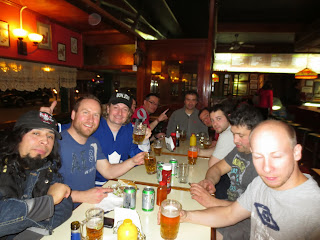 That first night ended up being a really really late one :P after our skate we were whisked to Lomito's which seems to be a local fav place to go for a steak and a beer and boy did we get into the beer that night . It was a week night and a few guys had to go home when we were kicked out of Lomito's at midnight ... the hard cores took us to another bar which was absolutely dead but somehow we livened it up after a few more rounds of beers we got Alejandro to start singing , i think we were all singing ! That night ended around 530 AM pretty sure the next day was our only day that was not the most eventful of days , we had a tight schedule there that was yet to be announced :)

On a side note *** i promise to try to continue this story in the next couple days ***
Posted by The Travelling Goalie at 8:57 AM No comments: 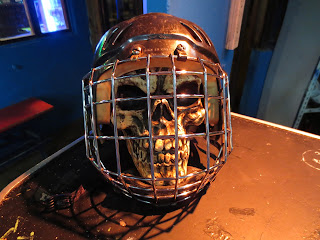 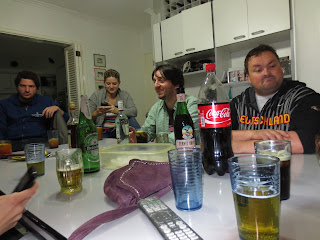 Wow can't believe that i returned home over a month ago , time flies when you are working like a dog ! Trying to save up for my next trip , these trips are never cheap but thanks to friends they are usually much cheaper . We went to Buenos Aires twice and this will be about our first stop there :) Our first stop had us staying at the Howard Johnson Inn Palermo . Palermo is one of the many neighbour hoods in Buenos Aires , i was told to either stay here or in San Telmo and decided this was best based on prices, etc... 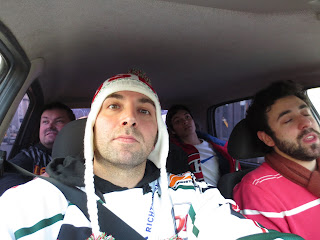 Our good friend Alejo whom i met in Toronto when friends from Argentina visited back in February , met up with us and showed us such a good time . We started by going to pre drink before our night out at Alejo's good friends place , that is when we met Lupe ! She is awesome , so energetic and of course a hockey player ... basically everyone we met that night played hockey , it was great . That night was crazy for me meeting up with all the guys i met in February . They really showed us a great night , we ended up at this awesome bar which had 3 floors and at first it was strange because it seemed like we were the only guys there . I am off the market but my 2 buddies are up for some fun so it seemed like a great place to get really drunk . We stayed there really late and when we decided to leave we took a taxi , and it was a long drive around the corner LOL ! seriously we could have walked but we had no clue where we were .... 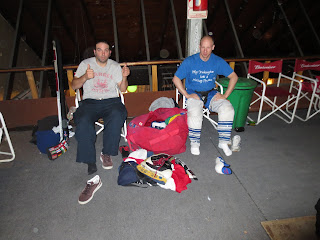 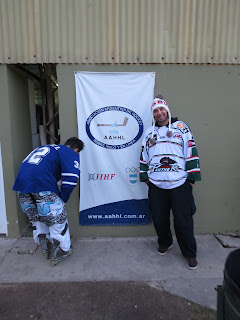 Day 2 saw us going out to watch some inline hockey . I have never actually watched a live game and this game was for the championship ... i think it was game 1 of a best of 3 series . The place where they hold the games is called Peru Beach , pretty cool set up right beside the water with shopping area not too far and an actual beach with some food vendors . We watched most of the game with our buddy Alejo ... too bad we didn't get to watch Ashby play as we picked him up for his game too . we had to leave to go skate on the ice :) it was on the opposite end of city though . Alejo i gotta say bud you friggin rock for doing all that driving to show us around , thanks boludo ! 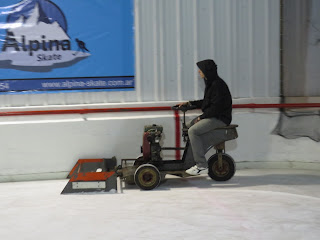 So as you see above , i did go to the rink to play ... unfortunately i did not bring my own gear as i had a flight like 6 hours after and didn't want my gear to be wet and was told there would be gear for me at the rink . Well there was gear at the rink , but it did not fit :( so i watched Andi skate there and trust me that sucked as this rink was different . Alpina Skate (name of rink ) is in a friggin bar !!!! no joke , we almost walked by it on the road as we were looking for an arena LOL . we were told to go inside this bar and way at the back of the bar was the ice pad ... its unreal . Funny as i got undressed i thought this isn't the first time i have been naked in a bar HAHAHA . Of course this rink had its own version of a zamboni as seen above . 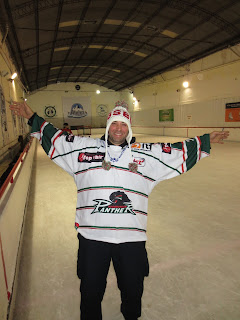 We didn't have much time to spend on our first stay in Buenos Aires , and to be honest i totally loved it there and was looking forward to the return trip . I would love to thank Alejo and Lupe and the rest of the gang there ... was great meeting up with Max and Pablo again , and it was great meeting all the new people like Matt and Liz ... you all helped me with some great memories . Next time i visit Alpina i will bring my own gear :) 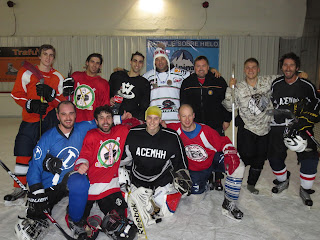 Posted by The Travelling Goalie at 7:24 AM No comments: