Well the last few days have been a crazy emotional roller coaster ... things were on a high the other week and i was making some crazy plans to do this and that and at the same time my Ghetto Blaster club was on a high too with both teams making the finals again ! 2 years in a row that both teams have made it to the finals . Then came the brick wall .... you know sometimes you need a reality check . Work seems to have dried up so my funds are not as high as i thought and i have to start changing plans to work within  a smaller budget ... that was the first wall i hit .

You know when it rains it pours and it really coincides with the damp weather here in Toronto these days :( not that i dislike the rain but hypothetically you know what I'm saying . As i said work dried up and then i got the news from my Moroccan friends that the free hotel room i was promised in Prague for IIHF world championships was not on the table anymore . Yeah that sucks big time , so i found an alternative ... i will just skip most of the games i was invited to and will go to Eindhoven,Holland instead to play hockey . Some of you might be like why would you skip a free ticket to the gold medal game just to go play hockey in Holland ??? well firstly i rather play hockey then watch it ... that should pretty much shut you up ??? if that is not the kicker then how's this sound ... i will not have to pay $150 a night to stay in a hotel ! Yeah prices for decent hotels in Prague are over the moon because of this IIHF event :( The Clarion is fully booked and the closest hotel to it with a decent budget is not cheap so instead of staying there from the 11th -18th i will check out on the 14th leave my bags for the day then come pick them up before i take an overnight bus to Holland ... that saves me a night of hotel pay and i can sleep on the bus during the 13 hour ride . This is one of the things i have to do to make these trips happen .

As i said when it rains it pours ... so no work , no free hotel in Prague and to boot my Ghetto Blaster team on Tuesday night lost our championship game . That killed me ... didn't leave my house yesterday . Losing a championship game is tough on everyone but as a goalie that runs the team it hits you really hard . I feel better today even though its still raining but i know i have another crack at our weekend championship on Sunday and i know i have work coming up and i also know that where there's a will there's a way so this trip to Europe that i will embark on in 3 weeks will go well  .

3 tournaments in 3 weeks with IIHF games in between . Sounds like i am pretty much ready to book this trip . If you have been reading my posts lately you would also know that this trip started off looking way different then what it is now and i want to wish my friends in Serbia and Belgium the best of luck in their tournaments .  I really really wish i could have made it to both of your tourneys and i hope to make it to your tourneys in the future .... sorry once again :( i hate saying no to play in tourneys but sometimes it just can't work .... for those in Germany,Czech Rep.,Slovakia and Holland that i know ...be prepared ! The Travelling Goalie is coming !
Posted by The Travelling Goalie at 8:42 AM No comments: 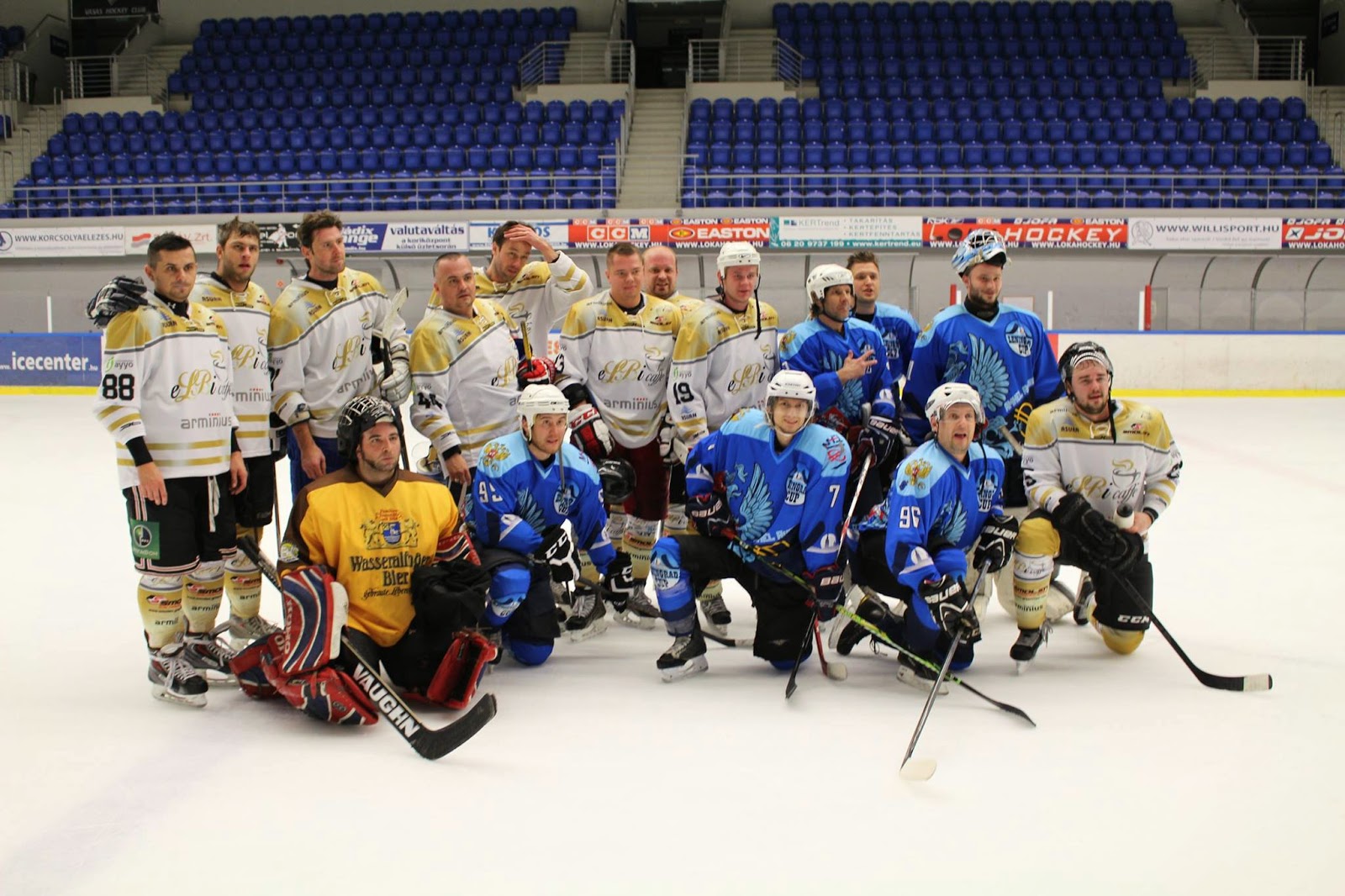 Happy Easter to those of you out there that celebrate it ... i for one stopped celebrating Easter years ago due to hockey commitments . This year there is no hockey and to boot i am home alone :( Kathleen is on her vacation in Italy and this weekend has pretty much been just debauchery ! Met up with some of my team mates on Friday night to celebrate 3 guys on our team that all have birthdays this weekend ... Happy Birthday Taylor,Renner & Takacs! All 3 of them are beauts LOL ! We all met up at a pub called the Brazenhead and had a good time then went to my favorite bar to get kicked out of ... didn't get kicked out this time HAHAHA:)

If you didn't notice i have been pretty busy working and getting this TV show going by sending magazines out all over the world with the hopes of building some hype ... so far so good but I'm hoping to see more pics being posted with the magazines , some people haven't followed through with their promises but that is something to be expected since not everyone is as awesome as you think they are .... think about it :P Regardless this weekend i found the time to record a short video for my friend Max Amhel congratulating him and his tournament on 5 years of success in Russia ... hopefully he likes it , i was a mess when we recorded it ! That leads me back to talking what i originally started writing this for . Yeah you must be wondering how the title of this has anything to do with the first paragraph ? well maybe i went off topic but really i wanted to build up the scenery and the connection to Max .... keep reading .... 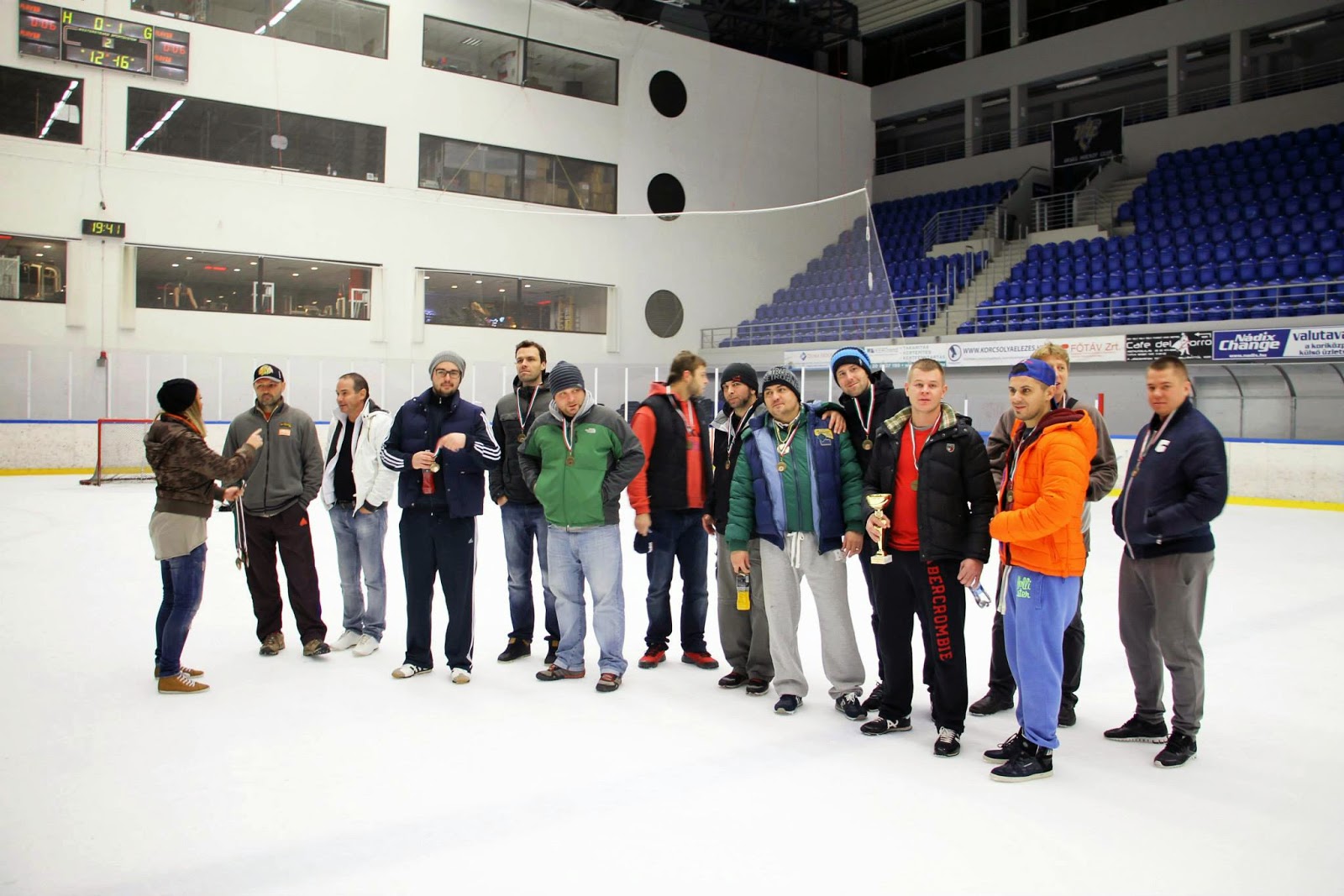 So yeah the next trip has changed drastically , it went from starting in Serbia and ending in Prague to starting in Munich and ending in Birmingham .... yeah i am not going to Serbia or Belgium or Luxembourg ( which never worked anyway) + i wanted to give my crew some time to regroup and get ready to come follow me to Europe ... as it stands now we are really hoping to shoot our next episode but time will tell the story . Yeah that means i am not sure ! The plan for the trip is that i fly to Munich, meet Timo ,jump in car and head to Tachov for probably the most insane tournament on the planet .... yes Rainer organizes it :) after that i have tickets i bought for 4 IIHF World Championship games , then i head to Kosice in Slovakia to meet Max . Yeah its gonna be my first time playing for a team based in Russia . From the sounds of it this team won't be all Russians as Max is calling it a United World team but really and honestly i will always consider a team that Max puts together a Russian team just like Rainers teams are German based but usually mixed . Now i have played against Max at 3 or 4 tournaments and recently i lost a semi to one of his teams in Budapest ,Hungary now here is the kicker .... i was playing for a Slovak team called the Bulldogs , and half of them were from ??? yup you got it ! Kosice ... so the likeliness that i will play against them for the team we lost to is kinda high and that will be weird . Regardless i look forward to meeting up with some old friends and making some new ones too !

Hopefully in the next week or 2 i will be able to finalize some plans to go play in Scotland ! And then i can start booking .... i will never book early again , plans always change :( patience is a virtue .

Posted by The Travelling Goalie at 7:05 AM No comments: 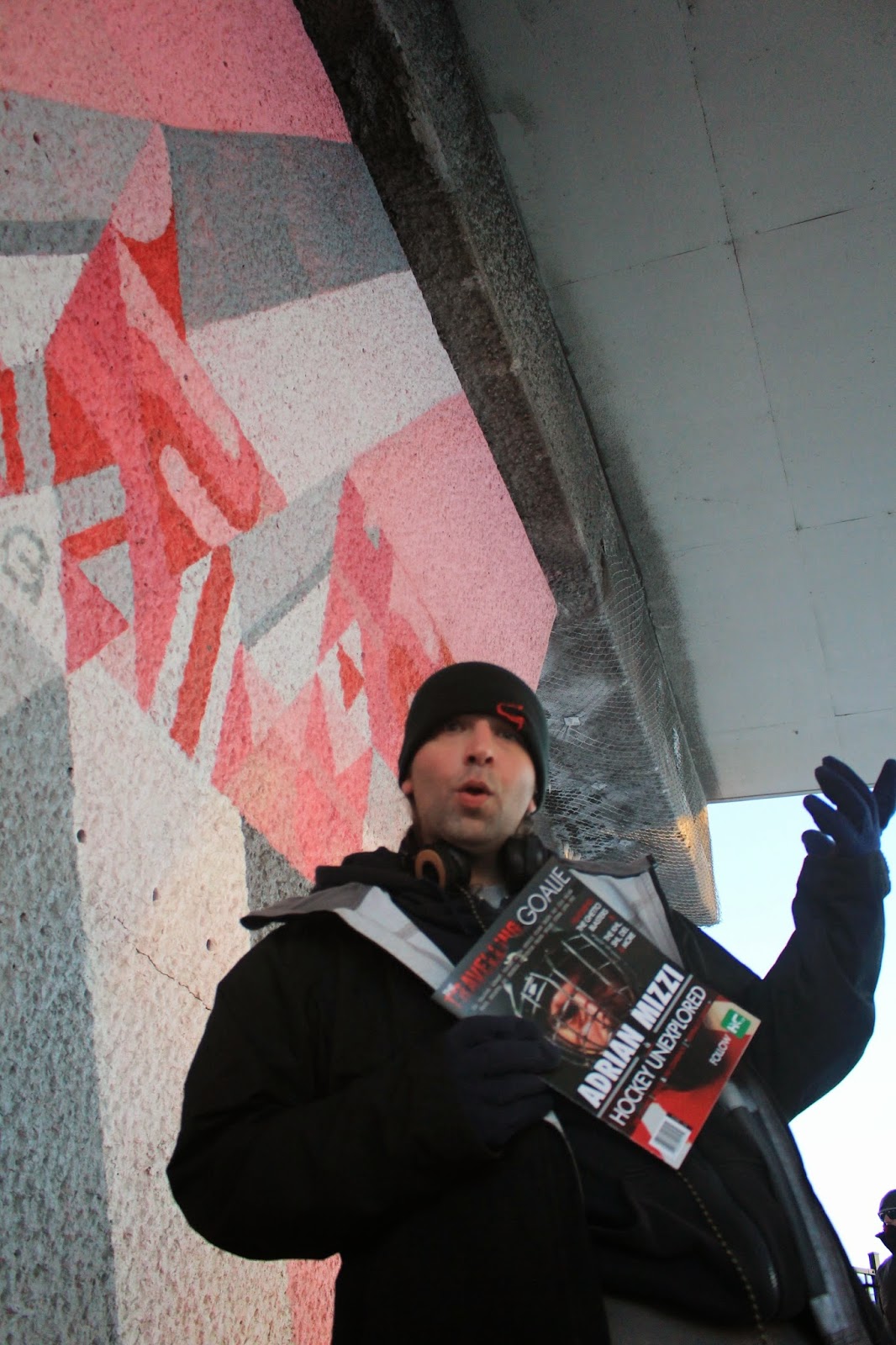 Haven't had much time lately to do much writing which kinda sucks but it kinda doesn't suck cause I've been working hard trying to make some dough to put together this next adventure . In my spare time i have been working on developing this show and oh yeah there is this magazine i keep sending around the planet to people with the hopes that they will take a pic with it and post it on all social media ( Facebook,Twitter,Instagram , etc...) with a short story of how we met and the (hashtag) #thetravellinggoalie ... pretty simple :) 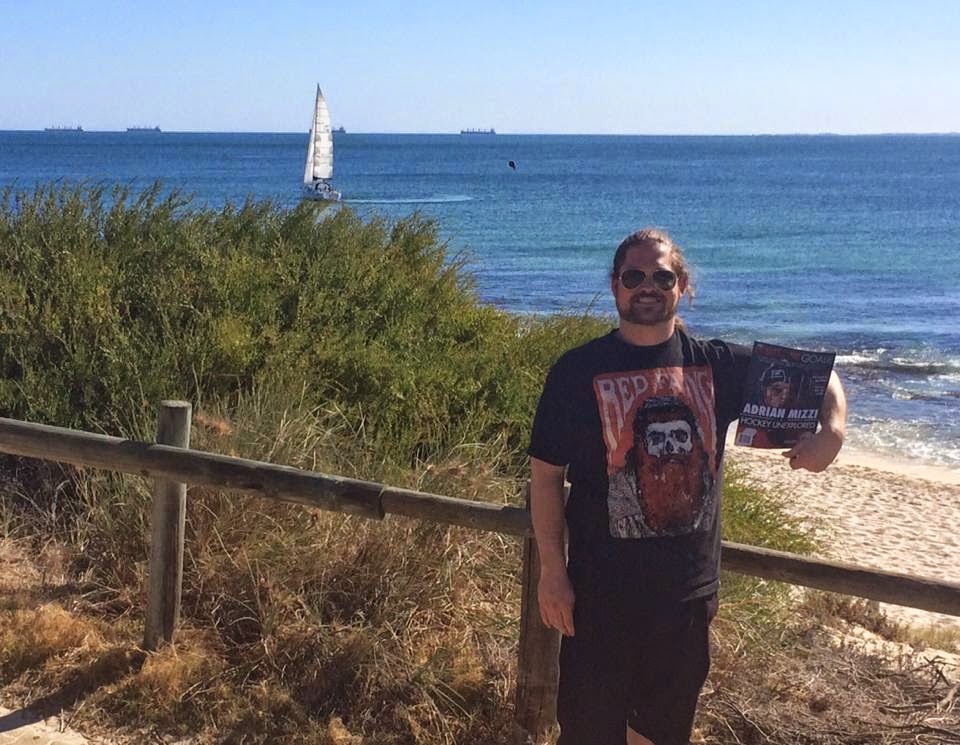 OK so you are wondering what is this magazine ? ... It's a booklet explaining the show and what we will be doing during the episode we are shooting . We have 2 different one's at the moment with the same cover photo . The first one was made before i went to South Africa and that is the one i have just run out of , it is a bit thicker and more expensive for me to mail out LOL ! The second one was made before we went to shoot our pilot episode . It's basically something we will give to people we meet on the road and we will use it to shop the show around to networks ... in some circles some would say it is part or our "treatment" . I'm not gonna explain more , go work in the film biz if you wanna figure that one out :) . 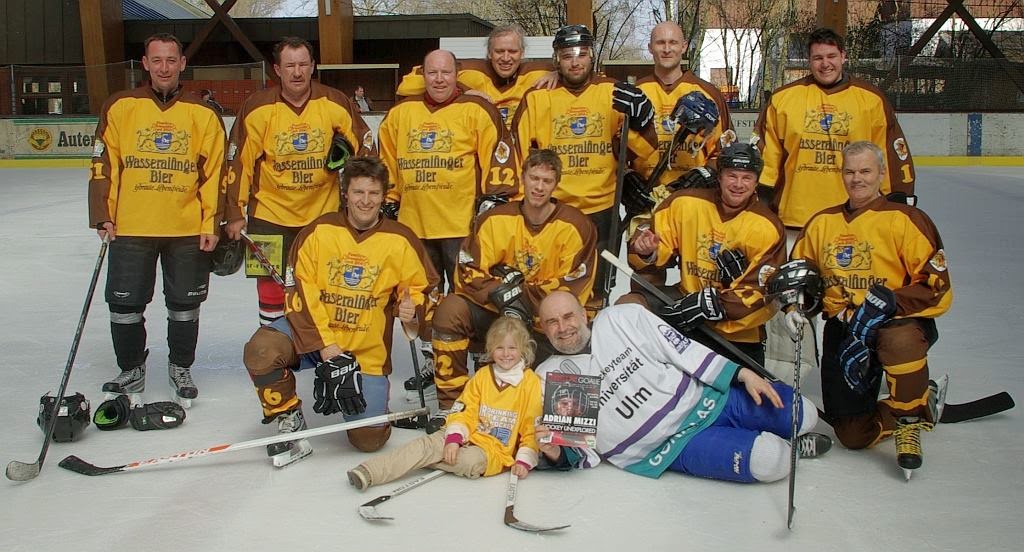 A few people have posted their pics so far ... James Brown is a buddy i worked with that just moved to Australia , he took a mag with him and posted it from there in the pic above ! Anton Fetzer got a copy sent out to him in Ulm,Germany and he posted his pic with my friends from the Wasseralfinger Old Boys ... for the record Wasseralfinger is one of my favorite beers on the planet :P and i have one of those yellow jerseys ... they are beauties aren't they ? 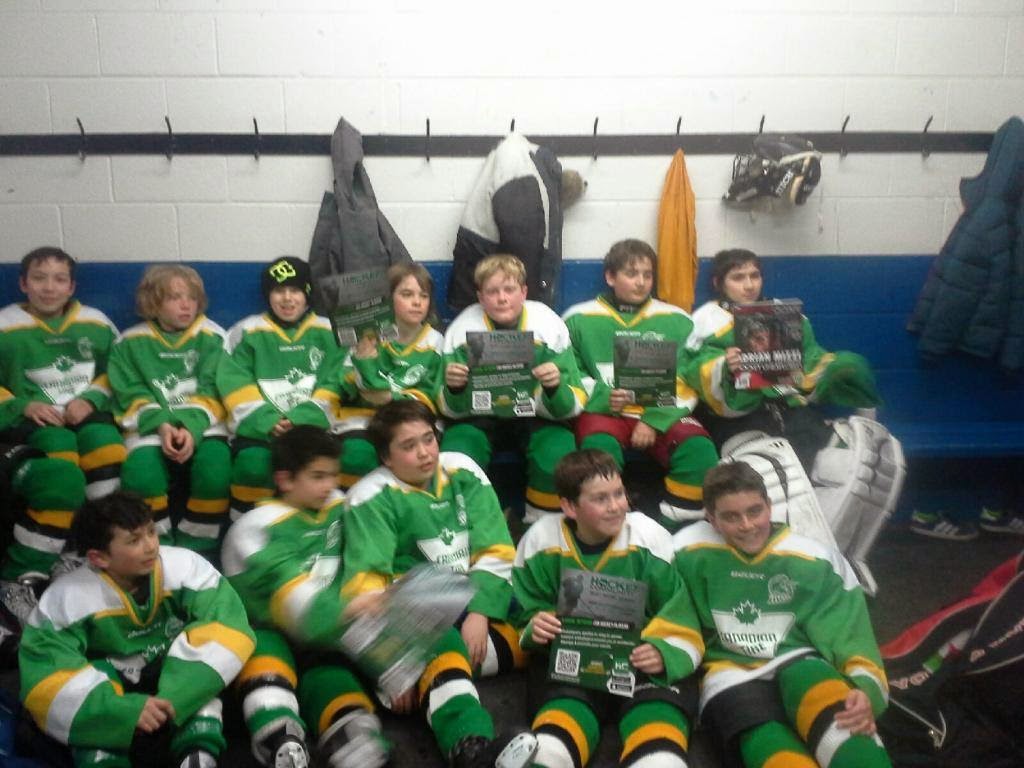 I actually dropped one off locally to my old friend Murray Fenech , and yes he is a fellow Malteser ... we know each other from when we were kids . He got his sons team (The Hulkz)  that plays at an old rink i played at ( George Bell Arena ) to take a team photo with the magazine .... great pic ! Sorry i didn't send you enough Hockey Community stickers Murray ! As i said it looks like you have more kids then i thought hahaha :P

One of my favorite photos so far is from Budapest, Hungary . I sent a mag out to my bank robber hunting buddy who just so happens to be an IIHF ref ... thanks for posting the great pic of you in your battle gear :) 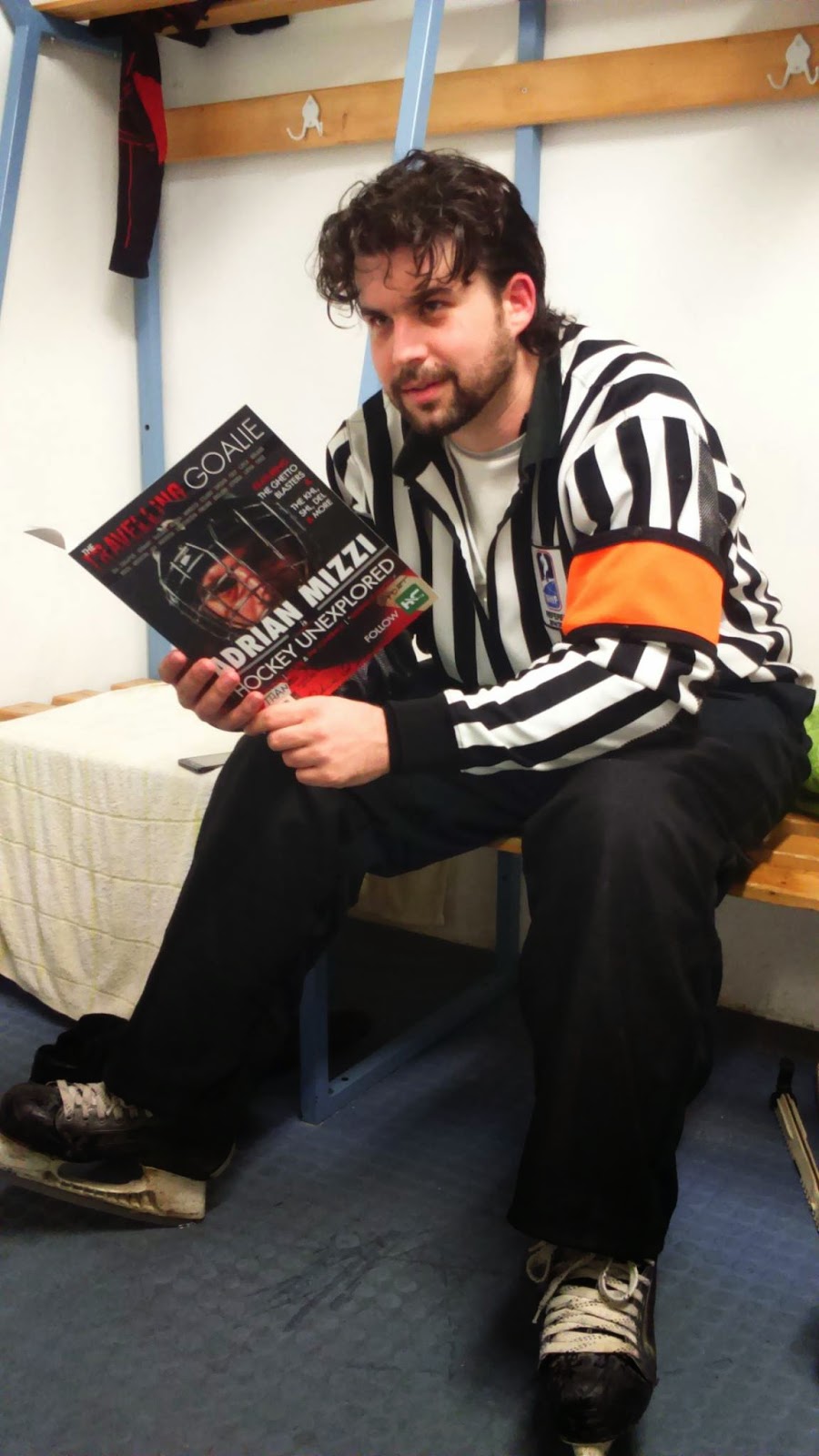 If you want a copy message me . At the moment i am out of copies but they will keep coming in the future and i will be sending 1 copy out internationally a week and sending out 1 locally a week ... I have to send out this week's copies today ! And i really look forward to seeing some more pictures popping up online ... if your native tongue is not English then feel free to write a small story in your language just as Zoli did in Hungarian . And don't forget #thetravellinggoalie .... Thanks for the support !

Posted by The Travelling Goalie at 5:47 AM No comments: