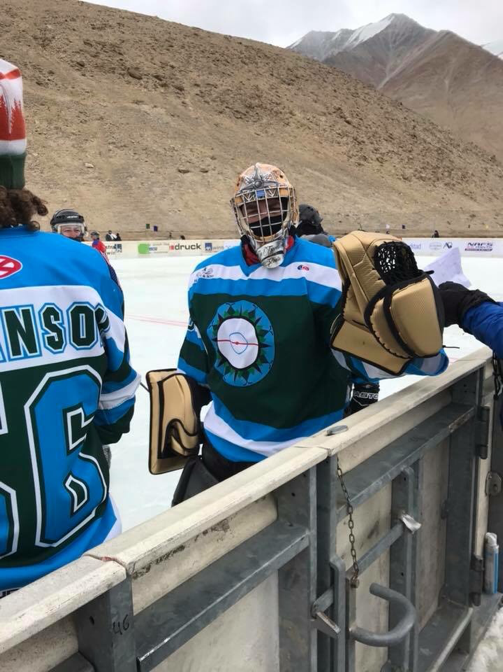 So the hot water bottles worked wonders but I still had multiple layers of clothes on while in a sleeping bag but at least I didn’t freeze to death . Today I am about to embark on a World Record setting attempt at playing in the highest hockey game ever and there is a bit of confusion .... I was hoping a taxi would come pick me up but instead I was offered a ride to the hotel to meet my team mates ? Game is at 9 am , takes about half hour to get there and half hour to dress so you would think 8 am but instead I’m told to be ready to leave for 7:30 am to have breakfast .... I don’t eat before hockey for 1 and there is no way I’m eating any more of the food here as it’s not exactly desirable . Yeah yeah I know I’m being a whiney little baby but I’m sure most of you wouldn’t have lasted the first day here so .... 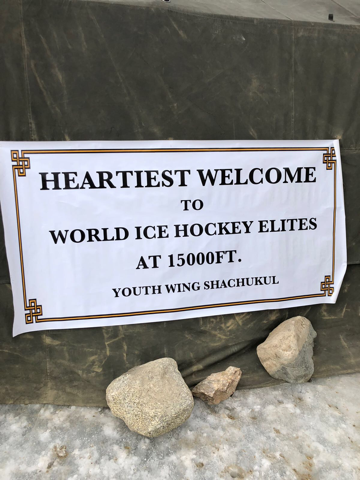 When we got to the hotel I jumped into a taxi with Coach Pete from Elevated Hockey and we had a nice chat on the way up . Check out his Instagram account , he has some cool stuff on there and he can actually play hockey unlike some of these phonies online who just post other peoples shit in this popularity contest we call the internet . We had a geological surveyor in our vehicle who lives in Leh and is from Holland but I can’t remember his name . Honestly the altitude was playing tricks with my brain and it just got more worse as the days went on . 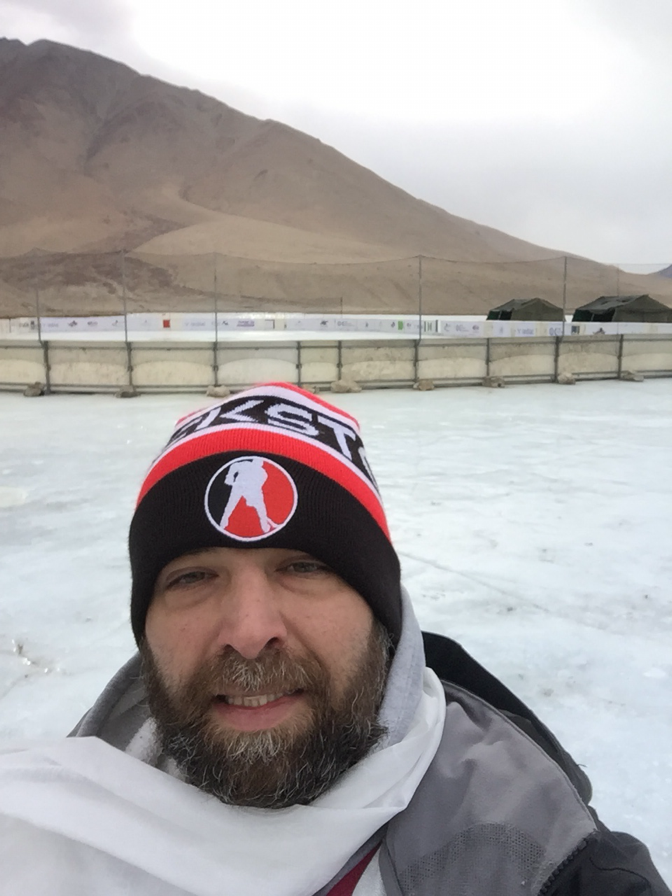 When we got to the lake with the rink built with boards and all it was pretty awe inspiring and we were all greeted by locals with traditional garb and we all were welcomed with open arms . We were directed to our tents which I thought were supposed to be heated but weren’t . Have you ever got changed on ice ? I mean down to your skivvies ! It was not very comfy so we all rushed to get dressed and then we went to the rink to get on and get warmed up but weren’t allowed on .... it was cold .... approximately -20 or colder with the wind chill and my water bottle froze up almost immediately . My feet were like blocks of ice and I really regretted not putting foot warmers on but I knew once the game started all would be good .... aside from the crazy altitude . 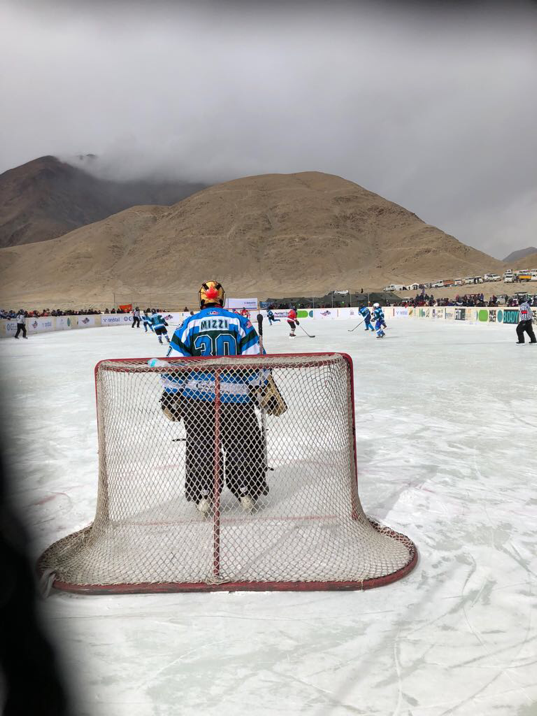 We got on the ice and the game began ! We immediately went up 1-0 and my team mates did their best to keep the puck out of our zone . I was struggling :( didn’t get many shots but I made the saves I had to and we ended the first period with that 1-0 lead . When I got off the ice they had oxygen for me and it helped . I needed water so they brought me a hot bottle ??? Who drinks hot water during hockey ? I don’t . Well I went out and took a few sips here and there . The second period started and we coughed up the puck on our end and the Indian player outlasted me and barely squeezed it by me , I coulda swore he was gonna shoot and if my glove wasn’t so frozen solid I might have held onto that puck but alas I didn’t and the struggle continued . Good thing we have 19 skaters on the roster , I was praying for a second goalie but our roster was filled by players :( that second period felt a bit better but I still wasn’t dropping into a proper goalie stance and was just barely hanging on by standing around . The wind was at my face and so were the fumes of burning yak shit .... yes it’s disgusting beyond belief and totally unhealthy . Nothing beats breathing in crap while I’m sucking for air at a higher altitude in this freezing cold weather . Nobody had done this before and I definitely know why . I can’t thank my team mates enough for pulling me through that period and I’m almost sure by the end of the second we were up 3-1 . Phew . 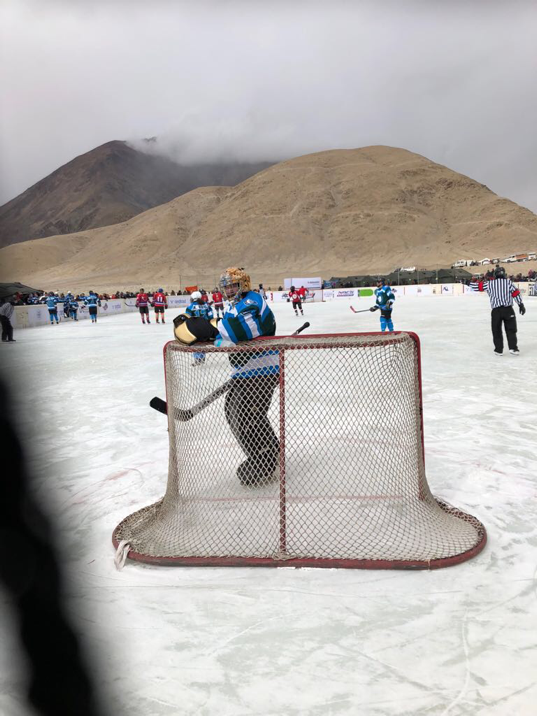 Of course I took more oxygen between periods and asked for cold water .... they brought me an opened bottle ? I don’t know who drank from this ! Wtf ? I asked for a closed fresh bottle and again was brought another open bottle .... I don’t even know if that water was bottled or from a tap or who knows where . Cleanliness is not an issue for people here apparently . Kinda disgusting but I took that bottle and headed out for the third and final period . We jumped all over them and were up 5-1 and then Adam threw his stick at a player to force a penalty shot . At this point I was feeling good and confident and was dropping into a proper stance . When their skater rolled in he came in from my right side and tried cutting across the net to try getting my down to go upstairs .... I robbed him blind ! My team went nuts :) after that they continued to press and try to get back into the game but I was on my game . With a few minutes left they scored a goal while my net was off ... couple guys argued it but I told them not to worry and let the other team have some glory .... the game ended soon after with a big 6-2 win . Now I failed to mention that this game was 3 - 20 minutes stop time periods and I was gassed by the end of it . But we all basked in the glory ... not the glory of winning but the glory of accomplishment . We did it , we set a world record ! 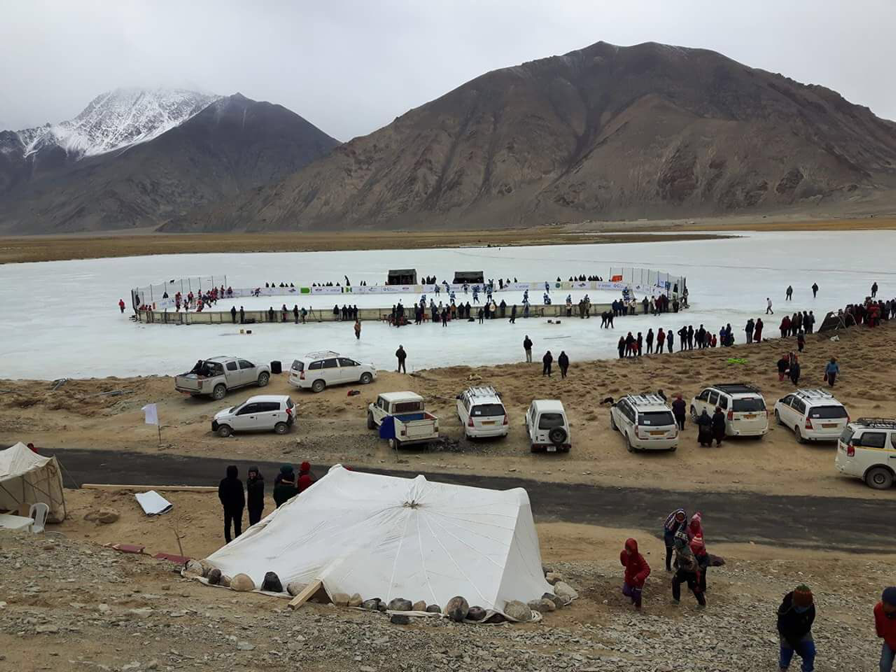 Had to do a small video clip for Servus TV and we took a bunch of photos then we all headed to our tent . I never took so long to undress . Left my stick outside the tent and when I came out it was gone ? Now I didn’t think anyone had stolen it but I was told that equipment tends to go “missing” from time to time which spooked me a bit . It took awhile to hunt it down but eventually I found it . Watched a bit of the Rainman Allstars game which they got slaughtered unfortunately then heade to the guest house . Around 3 pm they decided to leave .... I chose to stay to play another game the next day . When everyone left I went to sleep . Setting world records ain’t easy ya know :) 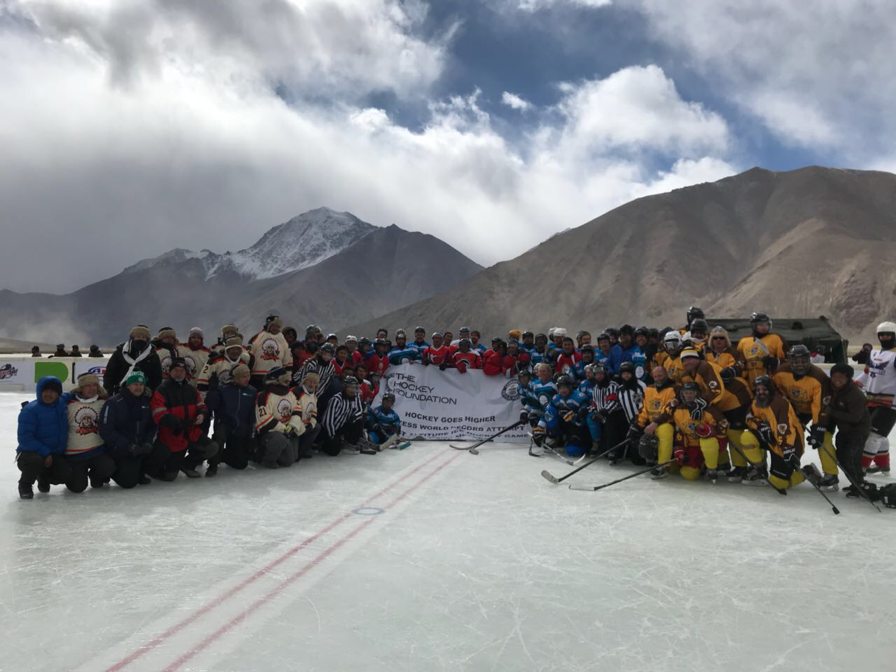 Posted by The Travelling Goalie at 5:13 AM