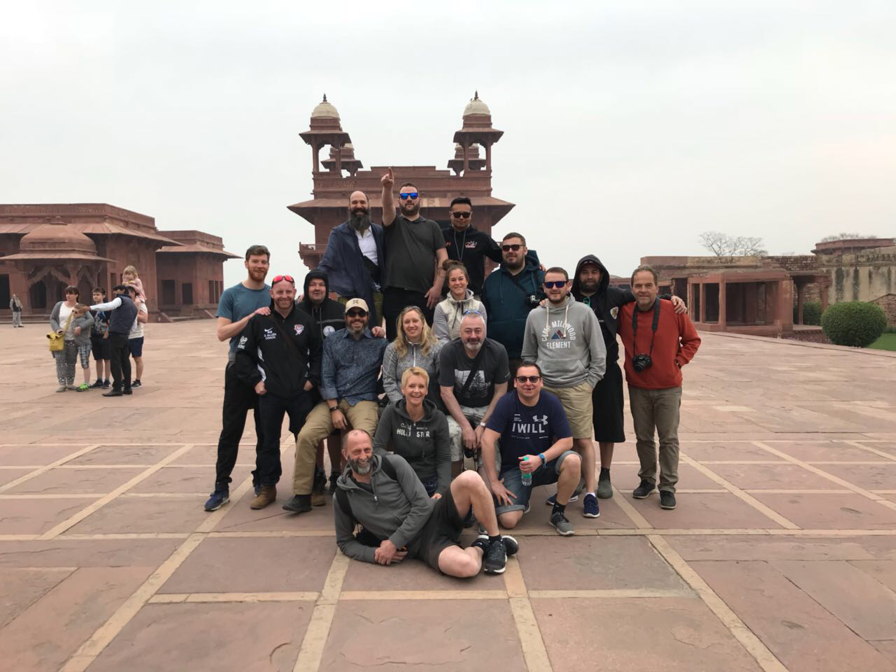 Woke up that day in Agra and I am pretty sure we were all fed up with India by this point . Just get me out , who cares what we do and it doesn’t matter were things I was hearing amongst the group I was travelling with . I was fed up too and was just going through the motions of getting the heck out of dodge . When I went downstairs I had a bunch of buttered toast as the food was less then appealing , my roomie Nick had an omelette and of course it was spicy . Really do people just have bleeding ulcers here , is this bloody normal ? Enough with the spices ! He took one bite and got turned off and had toast with me . We then  went upstairs to grab our belongings and the weirdest shit happened and not only to me .... when I came out the room the cleaning dude was standing there with his hand out asking if he cleaned the room well and he was looking for a tip . I wanted to tell him to fuck off but instead played dumb and said thank you and left . Really ? They are just as bad as the beggars . Oh yeah the beggars were waiting beside our bus and one of the guys gave them food , we watched them peel the wrappers off the food and just throw the wrappers on the road ? I’m sorry but these people are destroying their country and our planet ! It upsets me that people really don’t care here and that is why India is a giant dump ..... piss , shit and garbage everywhere . Good luck with that :( 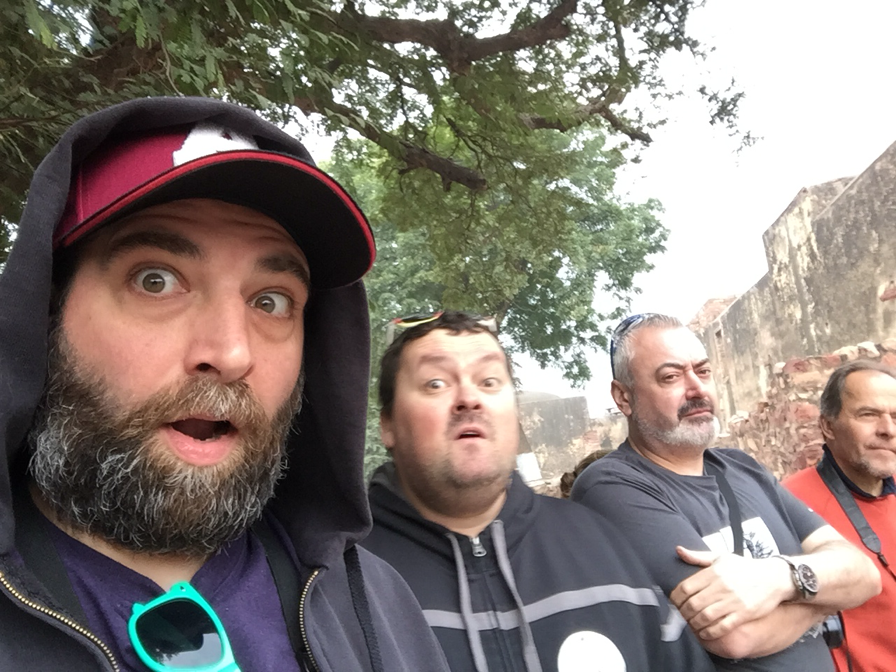 We climbed into our spots on the bus and PK was there probably hoping for a big money making day and he offered us to do some bullshit in Agra with lunch instead of going out of the city to visit this palace which nobody gave a shit about anyways . When the offer went out we all said no and he put his head down and left , we didn’t tip him and we left .... oh yeah everyone expects tips here ... everyone ! We were all fed up . We took off and left PK in our dust ..... honestly we just wanted to get back to Delhi to eat what we want and have a few bevs before we left , that is what I gathered . There was beer on the bus and we were feeling a bit better . My voice is gone and I’m finally keeping food in my stomach :) oh and by the way the name of the place we went to visit is called Fatehpur Sikri which was about an hour and a half drive out of Agra . When we arrived we were greeted by our new tour guide and nobody cared about this guy lol . Didn’t even catch his name and I don’t think many of us paid any attention to him or his boring stories :) it was raining and for once the air felt nice to breathe . Instead of taking a history lesson we made this into an adult playground but first we had to fight our way through the hawkers who continually tried to sell us the same useless shit . I tried to find a flag patch for my bag and once again had someone try to take me for a ride which I was not about to go on .... when he got me to his store I told him he has 15 seconds to produce the flag and he still tried to sell me some hand crafted garbage ... 15 seconds passed and I left . Does this sales pitch work on anyone ? It must since they keep selling this crap 💩 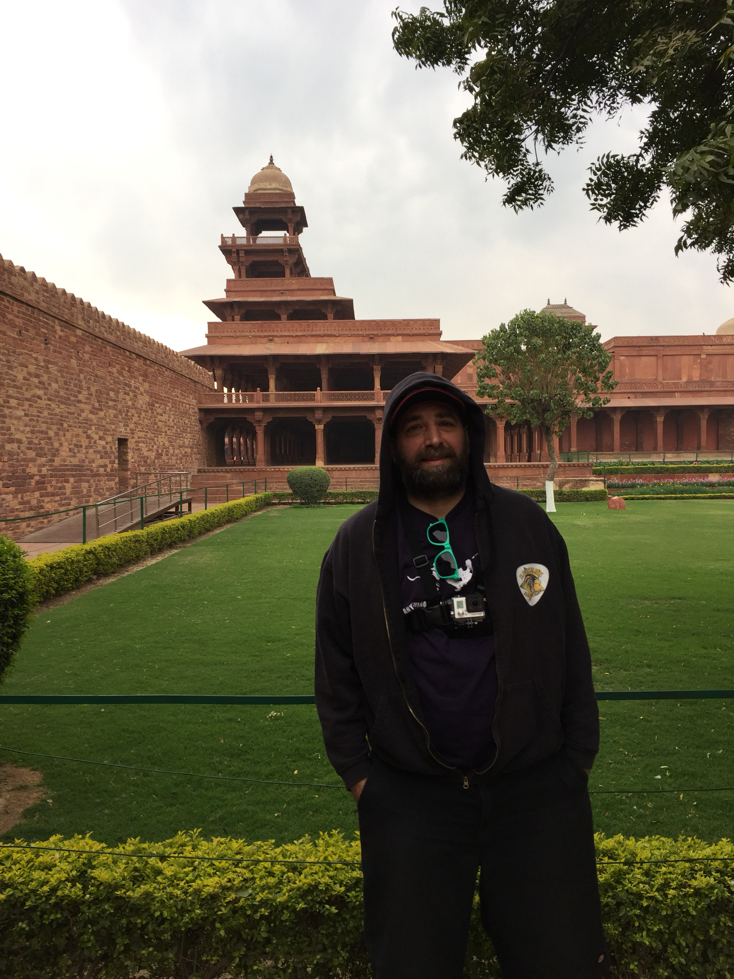 I left an Aston Villa Toronto Supporters club on the back of the bus that drove us around in Fatehpur Sikri and then got on our bus back to Delhi .... our driver offered to stop for lunch and as soon as we pulled up in the middle of nowhere to another tourist trap lunch stop everyone started yelling NO !!!! That shit ain’t happening again and we instructed the driver to stop us at the next place with multiple restaurants so we can grab snacks .... I don’t think anyone wants a curry at this point hahaha ! When we did stop I bought some pop and a pack of gobstoppers and that made me feel sugar happiness and then I fell asleep on the bus and next thing you know we were back in Delhi .... oh yeah that last tour guide had a moment of awkwardness as he stood saying bye and zero fucks were given and just as many tips . He left dejected too . Fuck him ! Lol . Sorry for all the cursing but we are all fed up . At the end of the bus ride we did tip the bus driver and his little gimp hahaha .... remember the guy that pulled my bag off the bus ? Yeah those two deserved a bit . I tossed in 170 rupees and I’m sure they collected a nice littl haul from us and I’m sure they aren’t sharing it with anyone but honestly I will never see these people again so who cares ? 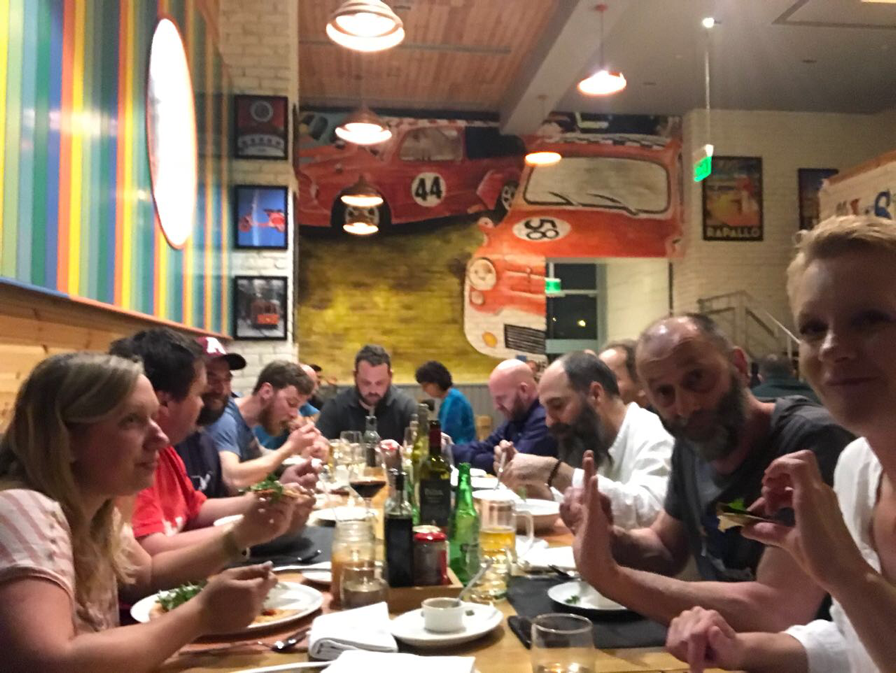 At the Holiday Inn I was separated from Nick Onslow :( miss ya buddy ! And I ended up sharing a room with Philip and Arri , they put us in a room with a king size bed ? Just one bed ! I wasn’t having this so I went downstairs and had to explain that I wasn’t interested in having a threesome with 2 other men and they switched our rooms while we began to have a few pints in the hotel bar . After a bit we moved to the Italian restaurant where I had some gnocchi which wasn’t spicy and was quite ok and I shared a bottle of white wine with Arri . Jacobs Creek will do and when that was done I used up all my rupees and we moved back to the hotel bar ..... before I left I paid for a round of beers with my credit card and snuck off to bed .... apparently shit went sideways with a few others and they pulled all nighters . I’m glad I called it a night after the Hamburgers left to catch their flight . Nice meeting you all ! See you in Denmark 🇩🇰. Had a nice chat about the reality of India with Philip and then we both passed out . Tomorrow we fly back to civilization lol !
Posted by The Travelling Goalie at 4:33 AM