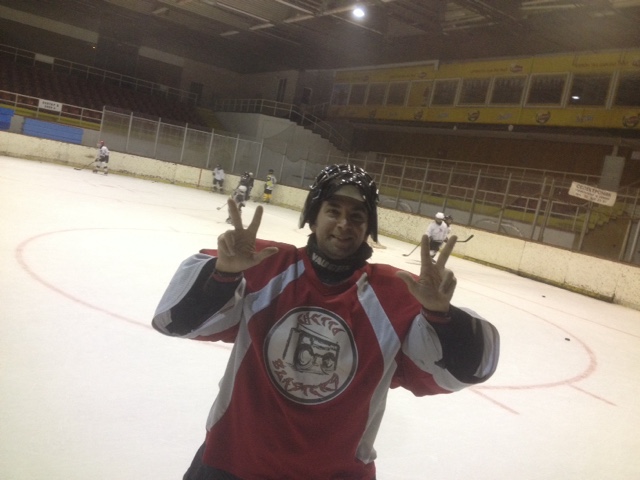 What a day yesterday was !!! Started the day by chilling in my room for the most part as I'm feeling a bit under the weather :( but then it all kicked off when Tate (Georgi) came to pick me up and we went for a quick bite to eat down the road ... Can't remember what that beautiful flaky cheesy yummy thing was but it was something like a pastizzi from Malta ... I'm sure it's not the healthy choice but wow it's so good I might go for another this morning !!! 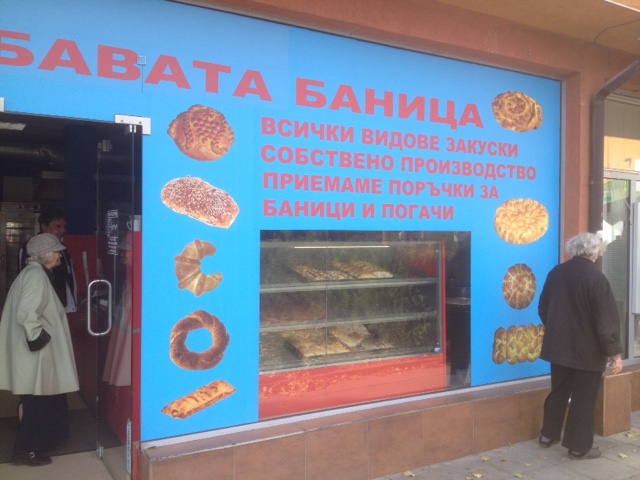 After that we went in a driving tour to see some of the tourist attractions , there are a lot of monument to Russia here . You can clearly tell this country was put together as a communist country and there are remnants of that all over . Don't get me wrong I actually think this stuff is cool being the Canadian I am ! You don't get to see this stuff all day back home and I would like to learn more . 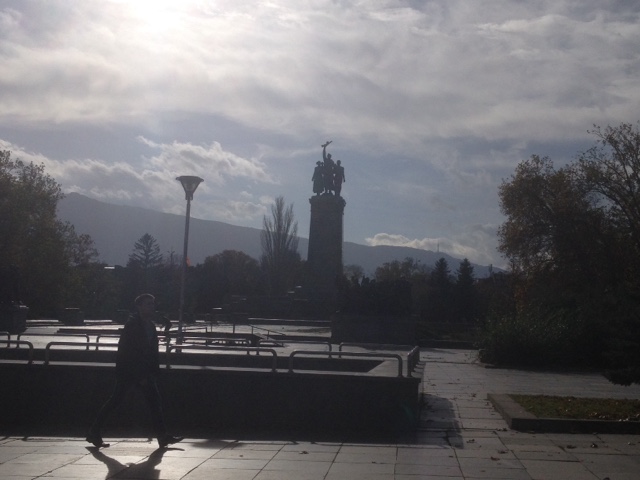 With the busy hockey schedule I have here I am short on time and we went to check out the Winter Ice Palace who my friends at Hockey-Community have this arena listed as CLOSED .... Trust me , it's not closed ! It's 2 rinks with one rink being Olympic sized and the other being NHL size this place also has a dance club attached to it and is bustling with people even at mid-day . I checked out the hockey shop in there with hopes of finding some Bulgarian hockey stuff .... I would love a tshirt or hat or any trinkets that would have club logos or hockey rink or shop logos partially for my own collection and partially to support the hockey community here :) 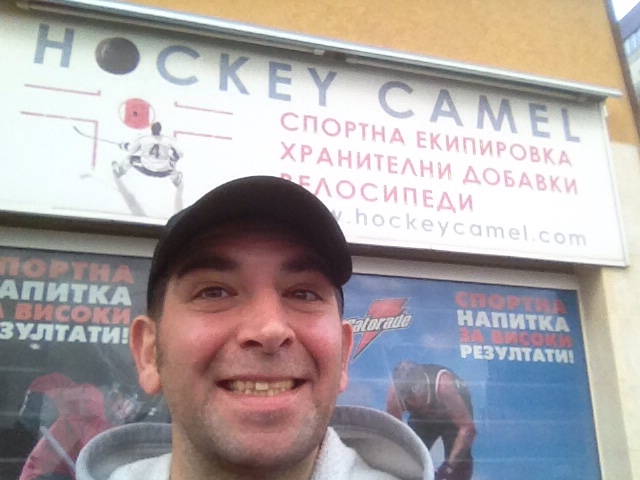 No luck finding anything in the Winter Palace hockey shop so off to Hockey Camel which is a hockey shop on its own around the corner from Winter Palace .... Same thing :( but I did score some stickers from the shop ! It's better then nothing , then all of a sudden Tate pulled out a trick from up his sleeve and next thing you know we were with former Bulgarian National Team goalie Ivo Shipkov ... I ended up getting a jersey from him and a limited national team collared shirt ... JACKPOT ! That shirt is gonna get treated like gold as its only made for national team players and I will probably sport it today or tomorrow at the rink :) oh yeah I'm here to play hockey too ! 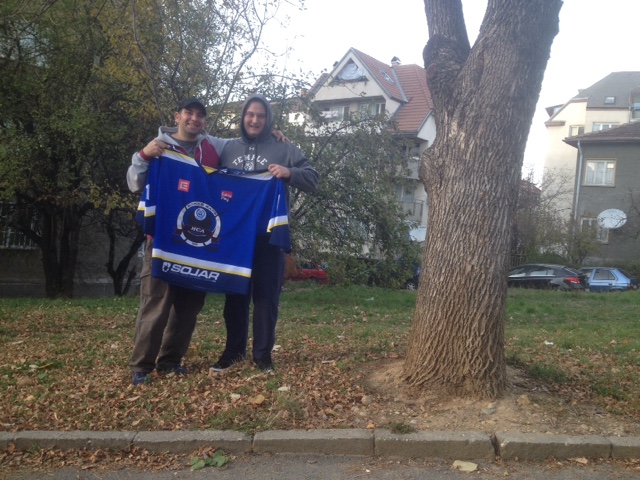 We quickly grabbed a bite to eat which was too close to my ice time(s) but we both needed some food . Tate got me to try this Bulgarian soup with tripe in it .... Let's just say the mushy texture of tripe almost had me believing it was mushrooms but it wasn't and I know what tripe is so lets just say I didn't finish it :) definitely not my cup of tea . I am really glad we had some pork and salad on the table also as we split a bunch of smaller meals . It's now time to head back to Slavia Ice Rink for my first ice time with the kids . I always like to do what I can to help others when it comes to hockey overseas and I'm used to dealing with language barriers ... As in this instance the coach didn't speak English and neither did any of the kids ! Good thing there was a young lad around to translate saying for me into Bulgarian so I could share a bit of knowledge with the young goalie on the ice who was the only goalie and was clearly happy to see me . I had to jump in for him once also as he was tired :) gave me a chance to try out my knee that I fell on in that mosh pit a few days ago ... It hurts like heck and feels like there is water build up in it or something .... I'm gonna suck it up though ! 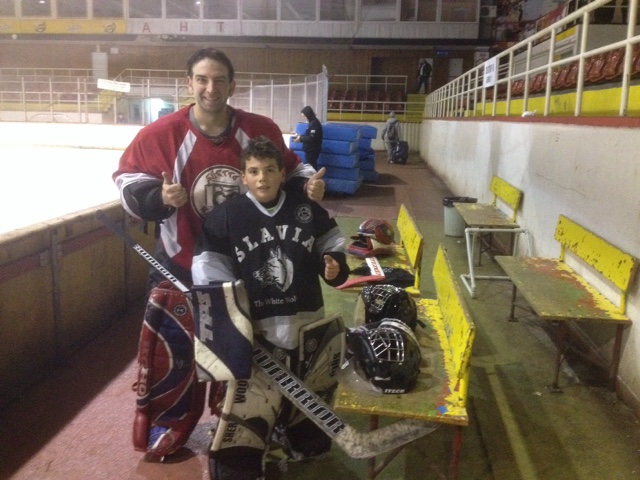 That was the first hour .... Next skate was with the Bulgarian National Women's Team who are gearing up for their trip to their IIHF Division 2 group b qualification tournament next month in Taipei .Unfortunately I was the only goalie there as their 3 keepers are all hurt :( a hammy injury , a finge injury and another gal is just plain old sick .... I'm a bit sick and injured but that won't stop me . There was a handful of the girls which were quite good and the practise went well and I was treated very well by everyone there . We ran through the drills and I survived everything they threw at me , on my own . If you are a goalie you will understand that a goalie can only stand in there for so many 2 on 1's without passing out.... I stuck through every drill and didn't do so bad either . Good luck ladies ! I wish you all the best and will be following your adventures next month ! 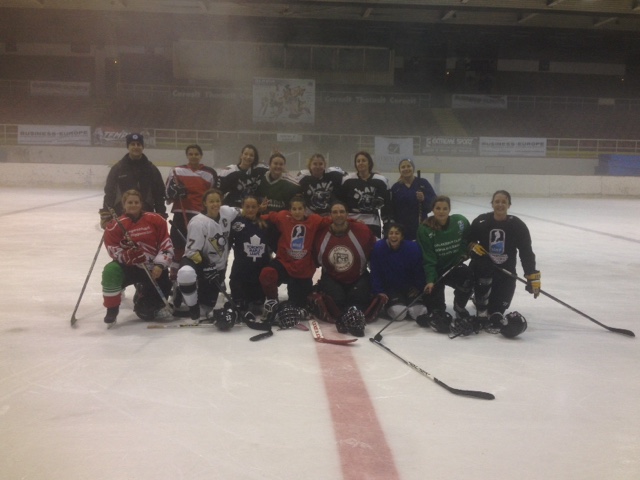 Not done yet .... My 3rd skate in a row was with the Ice Devils . Tate runs this amateur team that is mixed with young kids and adults and women too . It's very inclusive and is generally a fun group of people that all love hockey . A couple of the gals from the national squad stuck around to pepper me . At this point I was fighting to play off that I wasn't tired but I think the proof was in the pudding and really I took it easy and just wanted everyone to have fun . I did let a few softies in but honestly I am not here to dominate everyone like that one good from Puerto Rico once said .... Yup I will never forget what you said to me you d-bag .... And I know you are reading you chump :) 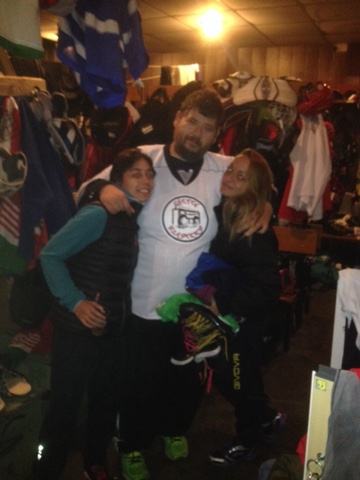 Unfortunately I didn't get to have a group photo with the Ice Devils as the lights went out abruptly and we were all standing there in the dark hahaha ! We all went back to the dressing room and had a few beers and talked about our time on the ice and had a much needed shower with a bit of rakia which was deadly and totally home made ... The good stuff ! There have been countries I have visited before and only been on the ice once but here I am getting the Royal ice treatment with 3 ice times in a row and more to come ... I think I will be on the ice at least 10 times during next 3 days . I hope I can keep my energy up ... Time to eat some breakfast and get ready to go play at the other rink with some students . So far so good Bulgaria ! Everyone I have met so far have been really good to me .... Especially Tate !!!! 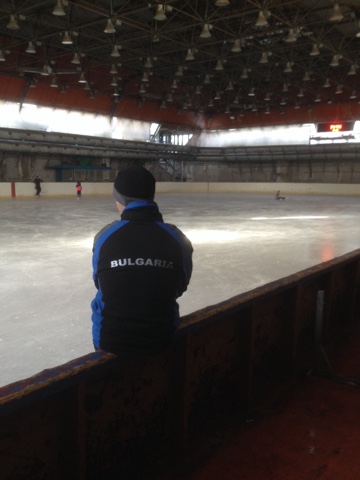 Posted by The Travelling Goalie at 1:25 AM