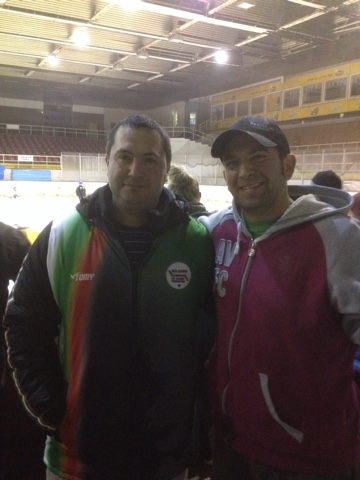 Man oh man am I sore today because yesterday I was on the ice 4 times after all this is a hockey trip . Georgi aka Tate picked me up around 9 am and we went to the Slavia Ice Rink to pick up my gear from the Ice Devils dressing room and we went to Winter Palace which is the other rink so I could skate with some students in some free ice time ... Shinny ! It was a mix group and I got to change in the NSA dressing room which is a pro/amateur club that also has a massive children's program with over 100 kids !!! Ice hockey is definitely thriving here , the only problem is the lack of rinks . With only 3 ice pads in Sofia we are left sharing this free ice time with figure skaters using half the ice :( the government really needs to put some money into ice hockey here to get to the next level . When I got on the ice I found out I was the only goalie and that sucked , what sucked even more was the way they used me .... 3 on 3 shinny hockey back home is played with the team without puck possession gaining possession and clearing the zone , these guys here had this stupid rule that once you gain possession you make 1 pass and then get a shot at the goalie . Ok if you are a goalie you would know that this is basically suicide !!!! I played along for a bit but then though about leaving and explained if they clear the zone I at least get 30 seconds to catch my breath instead of constantly flailing until I hurt myself . Some of the skaters didn't like that way and I was about to leave when they changed their stupid rules .... Yes they are stupid rules . Any time you have a goalie that is willing to skate with you , you should make sure they want to stay . Maybe that's why you never have goalies wanting to play ? There were other goalies at the rink too and they said the same thing .... Nobody wants to get hurt "having fun" .... 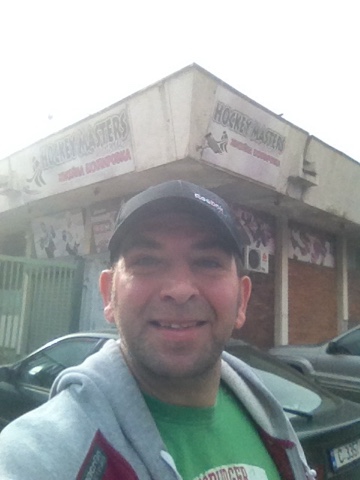 I know everyone here likes Winter Palace better but let me tell you that I still think Slavia has more of an ice hockey feel to it with a touch of communism . It's a dark old rink which has a leaky roof and a layer of fog above the ice .... It's beautiful :) these are the kind of rinks I want to play in ... With all its faults I still like it more then the newer and shinier Winter Palace which seems more like a figure skater haven ... 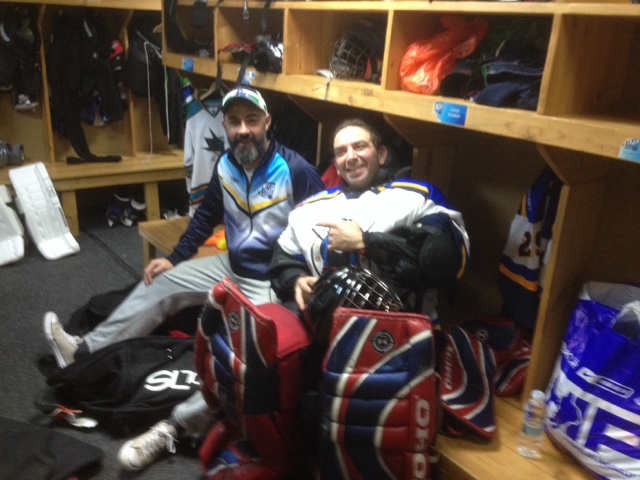 After the ice time we went to eat . My good friend Tate is on a diet so he had a coffee as I gobbled a bolognese spaghetti and salad , I need the carbs as I have 3 more ice times later ....after pasta comes a much needed nap with my gear by my side drying . As you all know it sucks playing in drenched gear  and my gear is caked with sweat ! 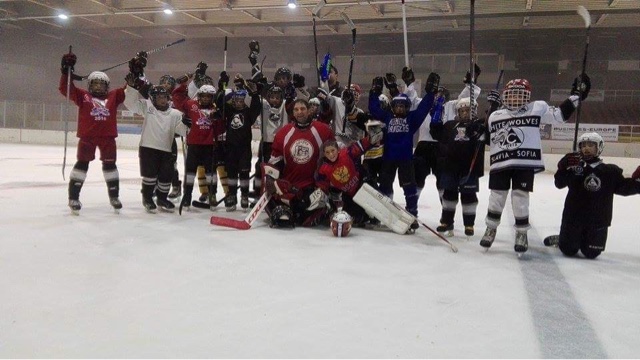 When I got up from my much needed nap I was picked up and shuttled to Slavia Ice Rink again for the first of my 3 ice times . When I arrived I met Bulgarian Ice Hockey Federation president Martin Zorge , he was there with his son Georgi who is seriously gonna be an amazing goalie ! When I got on the ice with this kid I was blown away at his skill level . He was like a wall and really didn't need that much coaching . All the kids there were happy to see me there and at the end of the skate there was a small game which I got to play in .... Some of these kids will represent Bulgaria in the future as national team players ! Such an honour to get on the ice for stuff like this especially when you know there are some special circumstances , I hope all these kids stick with the sport and help it grow here in the future . 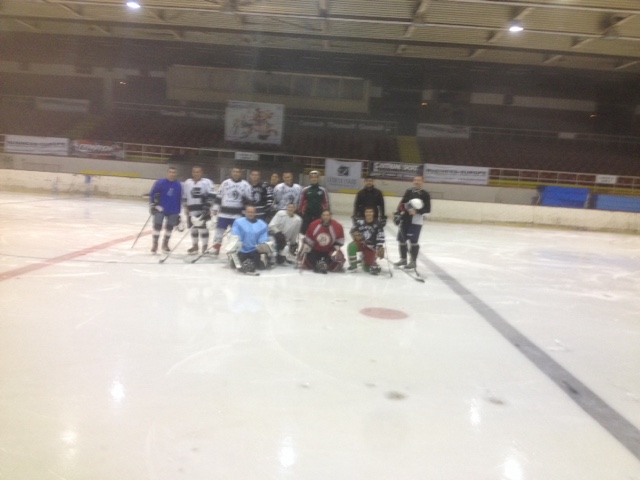 Next ice time was probably the most serious skate of them all ... Skating with pro club Slavia which Martin Zorge is a member of with a couple national team members I knew that I would want to try my best to impress and I think I did as I kept my team in the inter squad game and gave up less goals then my counter part who actually is not a pro either :) I made some nice saves but let in a couple  weaker goals . My knee is really killing me and its hindering some movements which I really am trying to avoid . Can't whine and complain about the fact I am also sick .... As a goalie we should suck it up and play , let's face it ... If you don't want to play then stay home and be a wimp ! If you want to be a goalie you have to play hurt and sick when called upon :) excuses are for losers ! 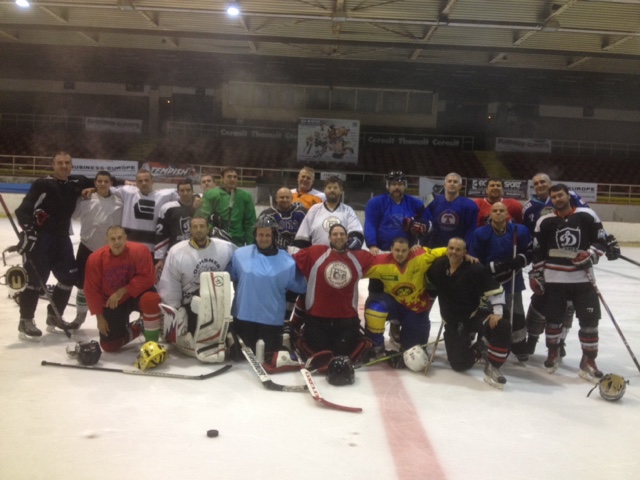 My 4th and last ice time of the day was with Torpedo amateur club and there was a mixture of others joining from other teams . The hockey culture is a tight knit one here where they organize ice times with better skaters competing against each other and weaker competing against each other . It's still weird hearing the countdown to switch lines for amateur teams , just like when I was a kid .... 5,4,3,2,1 BUZZ !!! Everyone had a blast and it was nice seeing Tate with his new Ghetto Blaster jersey on :) at the end of the skate I was dead and thankfully there were 3 of us to share the work load between the pipes ! Honestly could feel my body crying every time I stepped back onto the ice . I'm sure the last skate was more then an hour into it when I decided I was done . 7 ice times in 2 days had left me in bits but I'm happier then a pig in shit here . Couldn't have asked for more hockey .... Actually I don't ever remember playing so much in a country before , even at a tournament over a weekend I would be hard pressed to see myself on the ice 7 times . 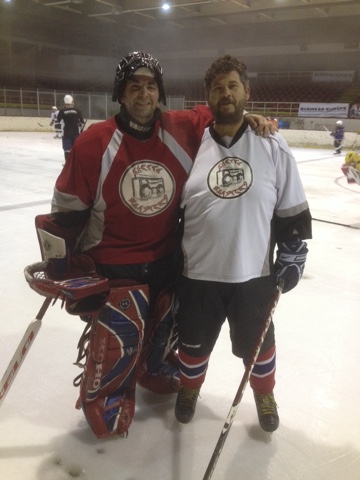 After the skate we went back into the Ice Devils dressing room and kicked back with a few Laszko beers and my new friend Martin Šprongl gave me a beautiful Czech National jersey ... I think I have attained about 7 jerseys here . Today I will try pre packing my stuff for my next journey to Romania where I highly doubt I will be playing as much as I have here . Tonight will be my 8th skate here for Tate's birthday :) happy birthday buddy ! 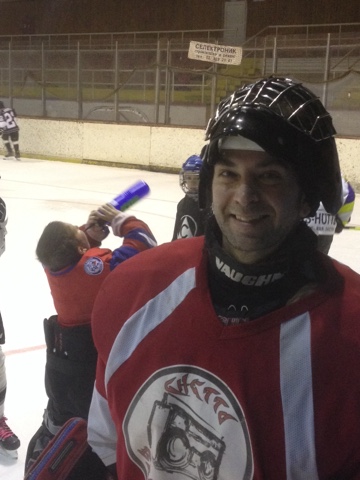 Posted by The Travelling Goalie at 3:01 AM