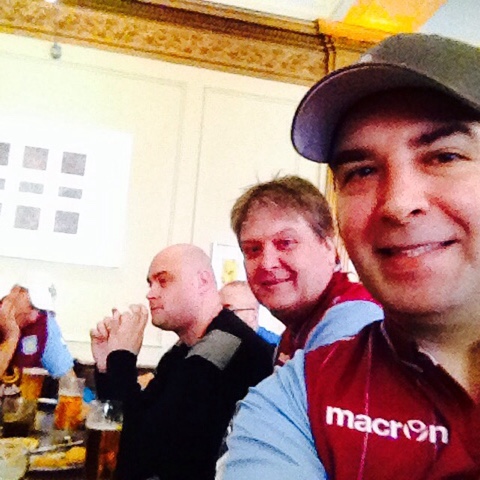 What more can I say really this was one of those days that a sports fanatic like myself only has once in a blue moon ... I can probably count on one hand the events I've went to that can compare to this . Though none of the events ever included teams I have supported and this one did ... My favorite football team in the whole world made it to the most prestigious final and I got a ticket ! It's like winning the lottery ;) if you didn't know I am an Aston Villa supporter and very proud of it ! 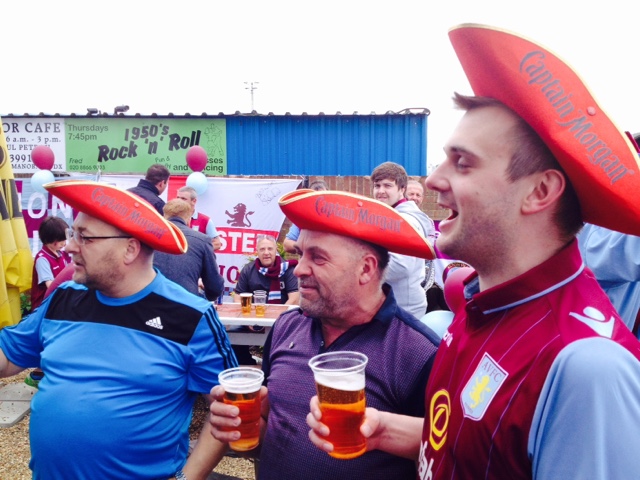 I was so happy to leave the Marylebone Travellodge ! Still can't believe how mismanaged that place is .... And through it all I still feel bad for Mevlam the evening manager that did help me the best he could . Thanks for helping me out , unfortunate that your superiors don't care about what you have to go through to keep people happy . Anyways I got outside of there in a flash when I woke up , showered and bolted ! We headed off to Weatherspoons on Baker St where I first met up with the Kiddy Lions years ago so it was nice to reminisce ;) we had breakfast which was twice as much in cost then the same establishment in Birmingham ... Man do i hate London ! Can't wait to leave this shitty city ! :) 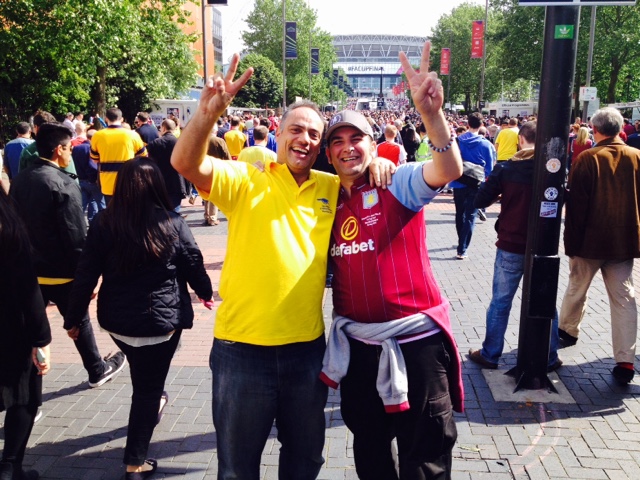 We drank a few pints then headed out to Ruislip station to meet the bus' coming down from Brum ...dropped our bags , drank more and had a burger . The atmosphere was fantastic , everyone smiling , kids playing footie ... Wish I knew the name of the F.C. that shared their grounds with us as they were top notch letting us park there for free . It's a win win for them too as we drained their beer taps ;p 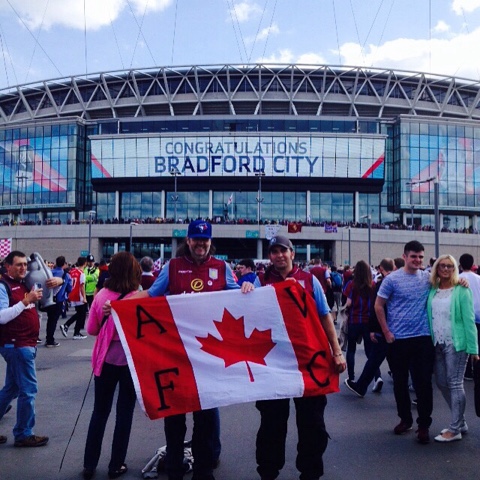 When we started heading to Wembley I bumped into Richard who was heading in the opposite direction ??? Guess he was coming to find us with his dead phone in tow :( yeah sucks being anywhere with a dead phone ! What did we do 20 years ago without these contraptions ? He needed to get lubricated a bit so we popped into a pub and necked a couple . Then made the trek to the game . 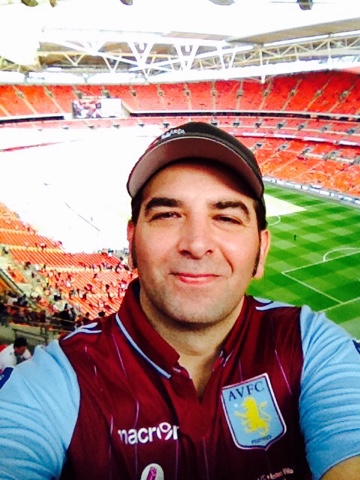 When I got to the ground I made my way to my seat and hung up my flag ... And then the game started ... Villa played shit ! They looked nervous and out of sort ... It was by far the worst I have ever seen them play and we got smoked 4-0 to Arsenal ... Congrats Gooners ! Just be humble talking to me about beating us or I will ask you how it feels to win Europe ? Oh yeah you guys have never won Europe ! 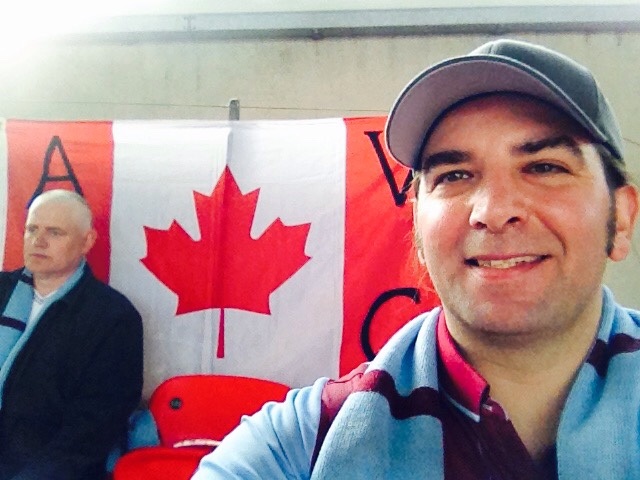 I'm not gonna get into the why's or who's of this game but I will tell ya that 100% I have no regrets coming to this game AND I am proud to be an Aston Villa supporter . Without a doubt I am happy we made the final this year and I am sure next years team will look much different and will compete harder . At the end of it we still have the best supporters on the planet and coming over to be with my fellow Villans was well worth the trip ... The joys and pains of being a Villa fan . 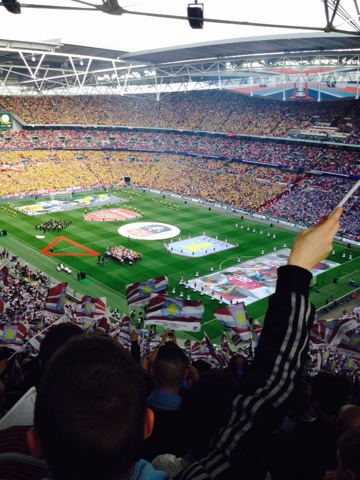 After the game we headed to Ruislip to get on our coach back north .... Yes I'm happy to leave London . Just hate this place so much lol ! Almost as much as I hate Vegas :p the drive up to Kidderminster was sobering so when I arrived at the Broadwaters Inn it was time  for a few pints with my host for the night Ben Mitchell . Chris Fetters and Pete Aston were there too , we had a few laughs while Ben stressed out over how to get us to his place in Stourport . Eventually we found our way and I passed out while Chris and Ben tried to teach me the rules of cricket ... Still have no clue but I kinda wanna learn . 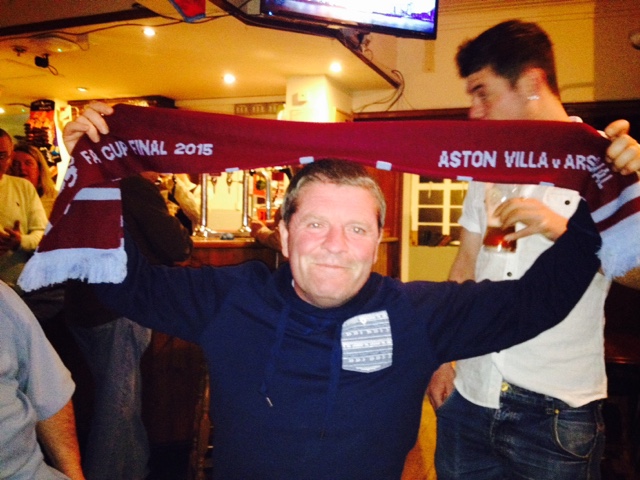 Just woke up on Ben's pullout and its snore fest here ;) hopefully these guys wake up soon as I'm hungry LOL !
I want to thank first and foremost Simon Leach for connecting me to the ticket . Gotta thank Matthew Haywood for selling me his spare and of course I have to thank Paul Harris for organizing everything else ... Oh yeah thanks to Ben Mitchell for letting me crash on your couch ;) UTV !
Posted by The Travelling Goalie at 6:04 AM