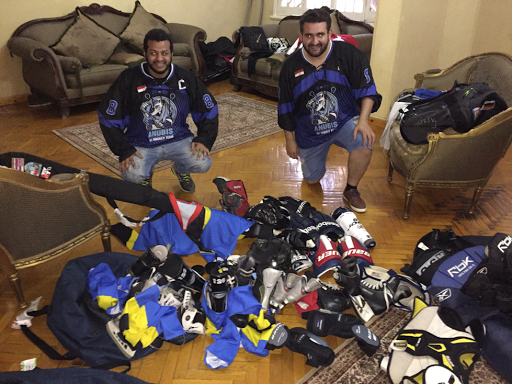 You know it is never a good idea to get black out drunk before flying early ? I don't seem to understand that concept . Guess I got carried away last night and to this minute I don't know what I did or how I got home but I do know that somehow I set my alarm for 4:30 AM and when it went off I was still absolutely smashed but somehow registered that it's go time . Jumped in the shower packed my bags and jumped into Karl's car and we sped off to the airport . I should have set it earlier because I was very late , honestly thought I was gonna miss this flight and I was pretty much mentally prepared for the let down when I arrived at airport 6 minutes before boarding . When I got to the counter I explained my bags and was waiting for the hefty charge for my 3 bags and rack of sticks I was hauling .... somehow , someway the final cost was £65 ????? I'm not gonna delve further; I paid it with a massive hidden smile and started running . Security was light and I made it to my gate just as people were boarding the flight . Now let's hope the gear makes it also :) 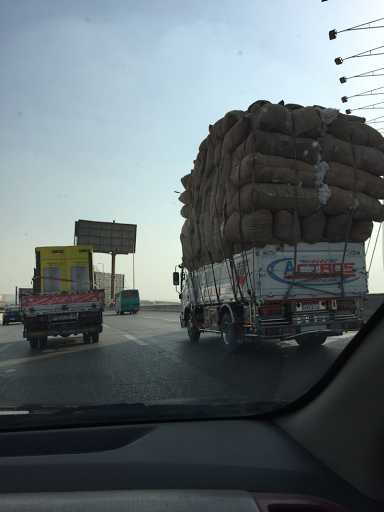 The flight was not really too exciting and there was no movies or anything for both flights . First one to Frankfurt is always a small plane with no entertainment but the second one was actually to another continent and really on a 4 hour flight you should have something ? Maybe I'm just spoiled by Air Canada since they even have entertainment for short 1 hour flights . Anyways I put my headphones and listened to some old school hip hop and really tried sleeping but was stuck with middle seat between two people that knew each other and yeah they were not really interesting either . My flight arrived late into Cairo and when I got off I tried getting on wifi to message the guys but for some reason I couldn't :( I got my visa upon entry for $25 USD which I have to say is much cheaper then the $125 CDN fee that the private company in Toronto wants .... yeah that's another story , we will sort them out another time !!!! Scam artists at their finest :( 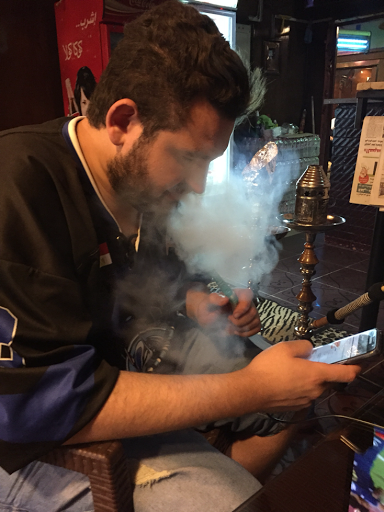 When I got to the last security point I was asked if I had anything to declare , I checked and said no even though I had 3 massive bags and that rack of sticks . Of course security needed a peak into this ..... they were confused beyond belief . First guy asked if its golf equipment I said it's for ice hockey , he called another security guard over and he said this must be for golf . Again I said no it's for ice hockey , this didn't register with either of them . A 3rd guy came over and I looked at him and said do you know hockey and he said yes then I said this hockey is on ice ! They let me through but I'm sure they are still wondering wtf . Usually you pass that last door and everyone is standing there waiting but it was a ghost town . Still trying to get the wifi I had a guy start bugging me if i need a taxi and I said no my friends are waiting for me . He pointed to the exit for the building and that usual crowd outside the gates was outside the building . Due to security reasons people are no longer allowed to hang out and wait inside . When I got outside I saw 2 guys approaching me wearing hockey jersey , i knew it was Ahmed and Ayman :) 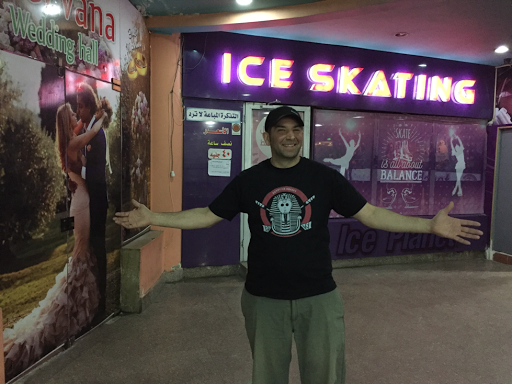 The guys helped me ram all the gear into Ahmed's car and we were off to his place but first let me tell you about the driving here .... WTF ? There are lines on the roads but they mean absolutely nothing , there are street lights in some places but again who cares . I saw a man with his small child in his lap steering the car , everyone fully talks on the phone , vehicles with more stuff packed on them then you can imagine . It's absolutely mental times ten ! I would definitely avoid driving here . You almost have to be a dick to drive here , I mean there is no waiting and honking seems to be a pleasure since everyone is doing it and oh yeah driving at night with headlights off is a thing here . I don't even wanna understand that one hahaha ! When we got to Ahmed's place we brought all the donated gear up and I could see the guys faces light up . It was an awesome sight for me and I'm very proud of my accomplishment here . Everyone here loves sheesha so we went for some before our ice time . I did visit a Vodafone to sort out my phone which cost me £95 Egyptian which is roughly $6 CDN hahaha . Everything is dirt cheap here ! Also grabbed some toiletries which I though I forgot in Birmingham but I didn't . Everything sorted . Time to hit the ice . 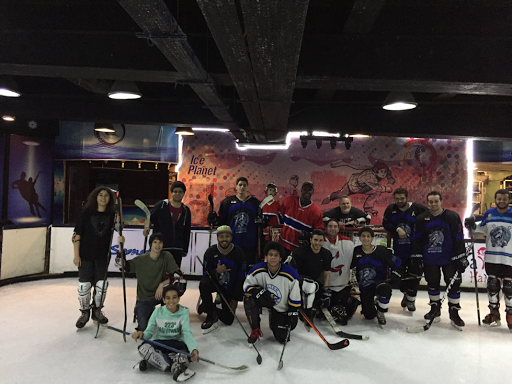 We got to the rink and had to put the nets together as they had to make them movable from rink to rink which means it is not one solid net but a collapsible one which makes them both easier to transport from rink to rink . The rink we are at tonight is Ice Planet which has been around since the late 80's and actually used to be a much bigger rink .... apparently it was 3 times the size but was shortened to make room for other stuff .... I notice the ping pong tables are busy and I'm hoping the ice didn't shrink for that but I gather that it did for that reason :( as I was getting my gear on people were piling in and there was a great turnout with around 15 skaters showing up for this 3 on 3 ice time which was 1.5 hours . Very mixed group with young kids ,adults and even a young girl playing with no gloves , but that's gonna change today ! I already mentioned that I want to see her wearing gloves for our next ice time . Everyone is super excited and for good reasons as this may be the start of something good for ice hockey in Egypt 🇪🇬 let's hope so !!!! 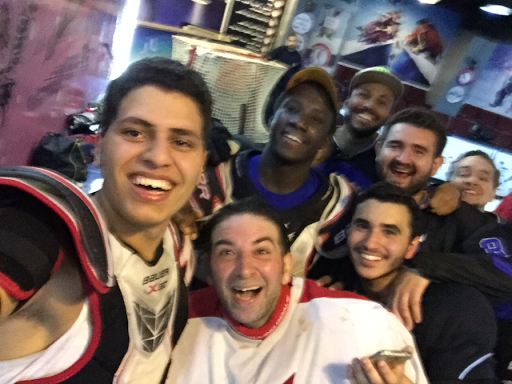 The skill level varies and the stick handling is really choppy but I'm sure it will get better if they had someone actually show them how to play . There are a few Canadians here in the mix and I'm hoping they can show these guys the ways of the game . Like no digging at the goalie when he freezes puck lol 😂 I was dying on the ice with no other goalie and playing 3 on 3 meant that I was bouncing back and forth constantly and needed a break . I drank 2 full water bottles filled with cold water and then our ice time was done . The ice itself felt a bit dry but overall I would say this facility is very in favour of the guys here playing ice hockey there . In fact the rink manager is a good friend of Ahmed's and I'm sure he doesn't complain about ice hockey being played there . The guys told me they never receive complaints about them playing ice hockey so that is really nice . 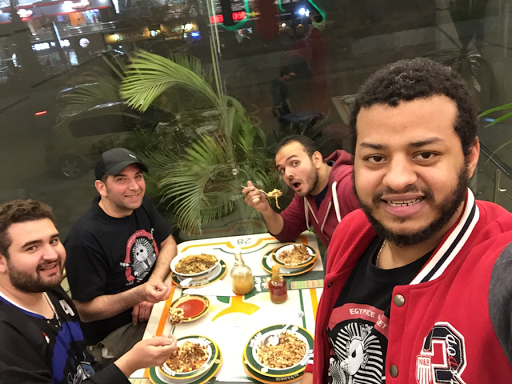 We had to pack everything up after and then we went for some sheesha :) I mentioned that everyone loves this stuff here right hahaha ! It was around 1 am when the guys decided to take me for a traditional Egyptian meal called Kushari which is mixed pasta with fried onions and tomato soup type sauce . It's good but it's kinda late for me to be eating ? Over here dinner time is actually late , when I told them it's around 6 pm back home they laughed . Seems to be a western thing eating so early because a lot of countries I've been too have that same idea of eating much later then we do I Canada (typically) . I couldn't finish my meal and not because I didn't like it or anything . Just wasn't in the mood to eat so late so I felt a bit bad . The guys ordered me a bigger plate too thinking I was dying of starvation lol . We got dropped off at Ahmed's car which was near sheesha bar and we called it a night . Ahmed is suffering from indigestion and I really hope he feels better in the morning . 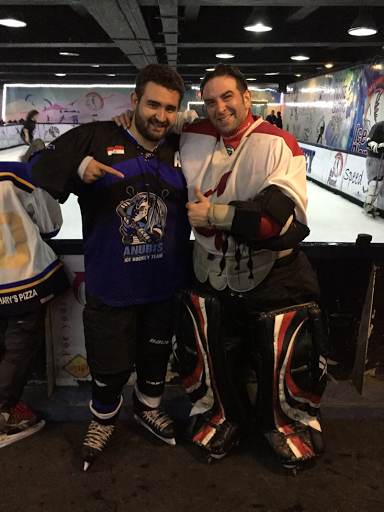 Posted by The Travelling Goalie at 4:28 AM