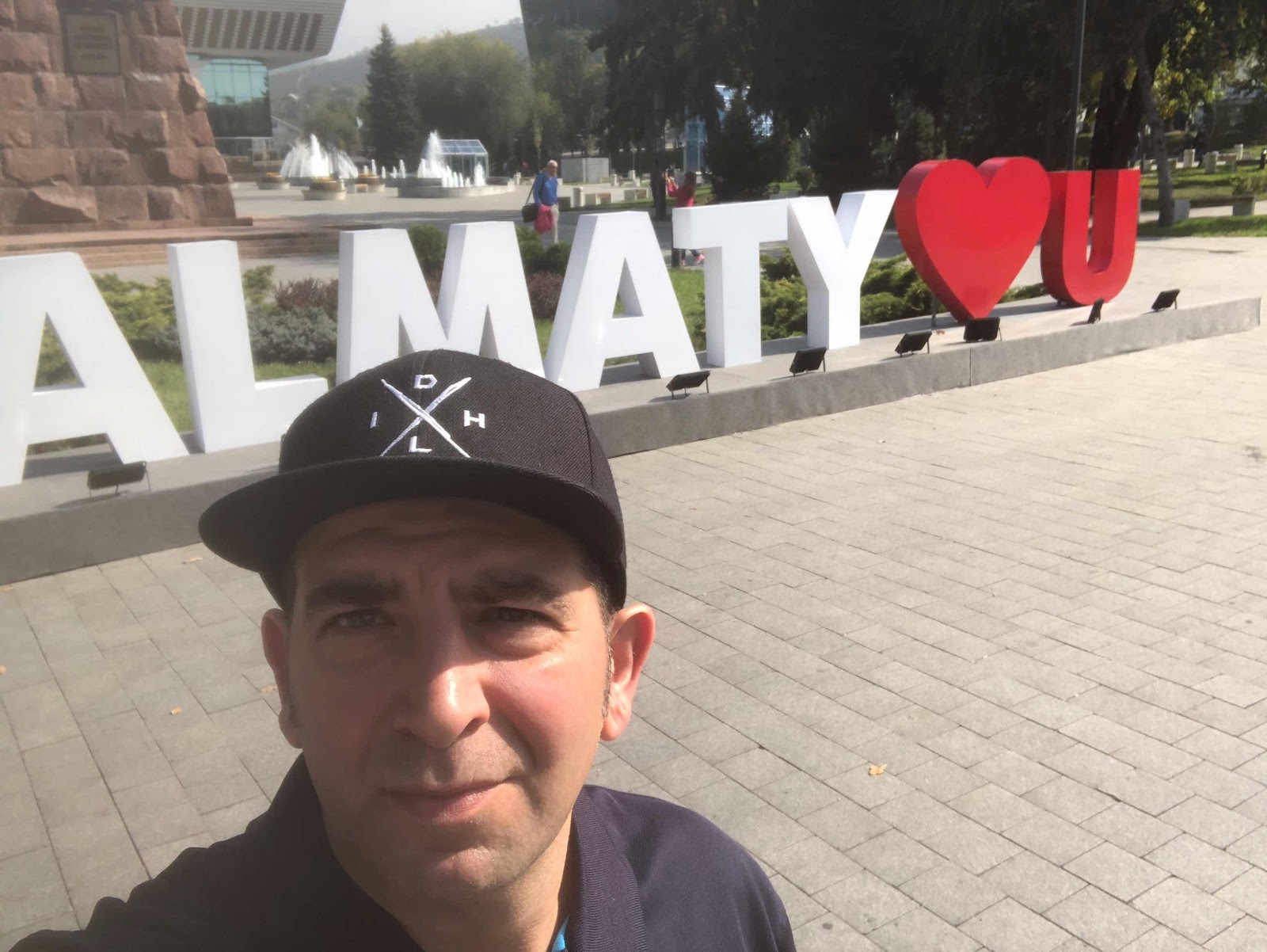 When I landed in Almaty, Kazakhstan 🇰🇿 with absolutely zero sleep I had to clear customs which was like a zoo ! People here do not respect the actual art of queuing up and as crazy as it drives me I opted to keep my cool in this country and not say a word as a few people decided they were too good to wait in any lineup . Cleared without a problem after about waiting in line patiently for half an hour and then the harassment began . Do you need taxi ? No ! Do you need taxi ? No ! Never ever take taxi with any of these pieces of shit . I had this chubby bastard following me around persistently bothering me and I tried to duck and dodge him and then I left the terminal with him in hot pursuit . He pointed to the parking lot and said his taxi was there and I said I want meter taxi and went to a car which I could swear on my life was a taxi .... this bastard yelled to the driver and next thing you know I have the guy following me helping the taxi (?) driver put my bag in their trunk . Then they both jump in the front .... what the fuck ! All I can think is that my gear is in the trunk and I’m in for the ride .... please don’t take me to the middle of nowhere and kill me . The ride to my hotel was like 10 minutes and I asked the driver to put the meter on and he did it on his phone and then they began distracting me as that meter disappeared . When we arrived at Hotel Kazakhstan they got out and asked me for 25,000 Tenge which is like 10 times more then what I was supposed to pay ... I said no that’s crazy and I saw the fat cunt that followed me around reaching into his jacket and I could swear he was gonna pull a gun on me and with my bag still in their trunk I opted to offer less money and they said ok ....20,000 Tenge and I said that it should be 2,000 and they said no that is what they pay for parking . What the fuck do I care about how much you pay for parking ? I wasn’t going to win this fight , I’m tired , my bag is in their trunk and I think they have a gun . I wasn’t going to pull out my phone either so I just gave them the money and they gave me my bag and sped off . Fuck ! 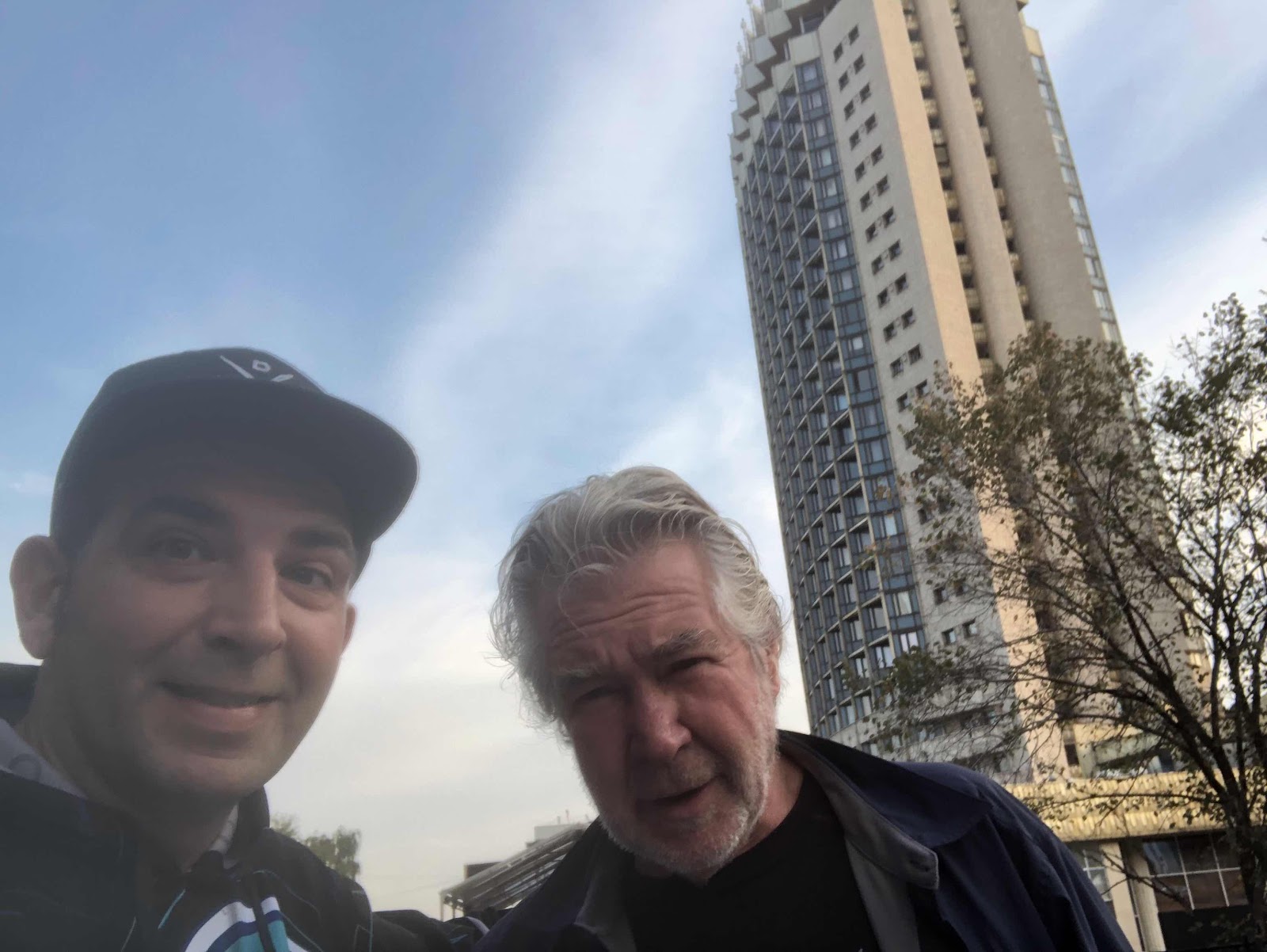 I walked into the hotel defeated and checked in and went to my room ... it’s 6 am and my room mate is Walter Epp who I can only assume is sleeping so I didn’t want to bother him . When I got upstairs my key didn’t work so back down I go to ask for it to be fixed and the guy at the front said Walter is in the room and I said yes but it’s 6 am and he is probably sleeping and before you know it the guy at the desk was calling Walter 🤦‍♂️ he answered and I went upstairs to the 22nd floor and dropped my bags and explained my taxi ride as it began to fester and I got angrier and angrier . Walter then suggested we go for a walk so we walked down from the 22nd floor and meandered around the area and I was just exploding with anger !!! I decided I wanted to report this and call the police .... surely the hotel has this all on camera as there are cameras posted at every entrance and in the lot . I’m not gonna get my money back but if I can I want to fuck these bastards day at the very least with a visit from the po po ! Hotel calls the police and they arrive around 1 pm . This is after we walked up the stairs to the 22nd floor and showered up and finally got some sleep . 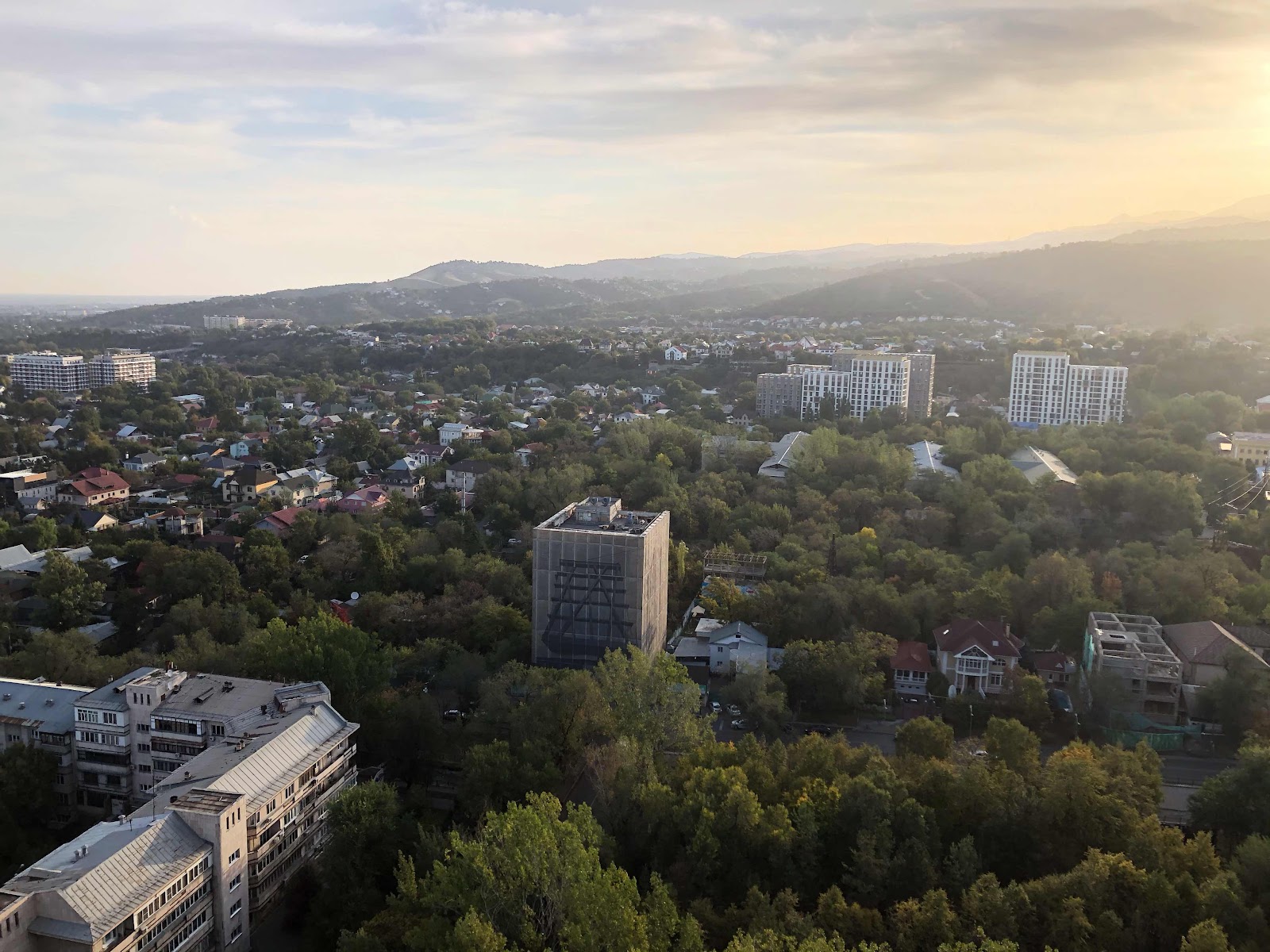 Wouldn’t you know it ... when the cops arrived there was like 6 of them and I had a translator and explained the whole ordeal and they were actually really friendly and that’s when I found out the hotel cameras are not working (how convenient) . I was a bit nervous thinking that this might be all tied in and the police asked if I would like to go to the station to look at pictures and I said I had plans and couldn’t and all I could think were bad things .... can’t trust it ! The police left and I went to meet Walter at the top of Kok Tobe which means Blue Mountain and I had to take a gondola 🚠 up the mountain . When I arrived the whole area seemed to be a place that communism had left behind and forgotten . It was pretty quiet up there with Russian children’s music humming in the background . We had lunch and then headed back down to our room to take another rest . 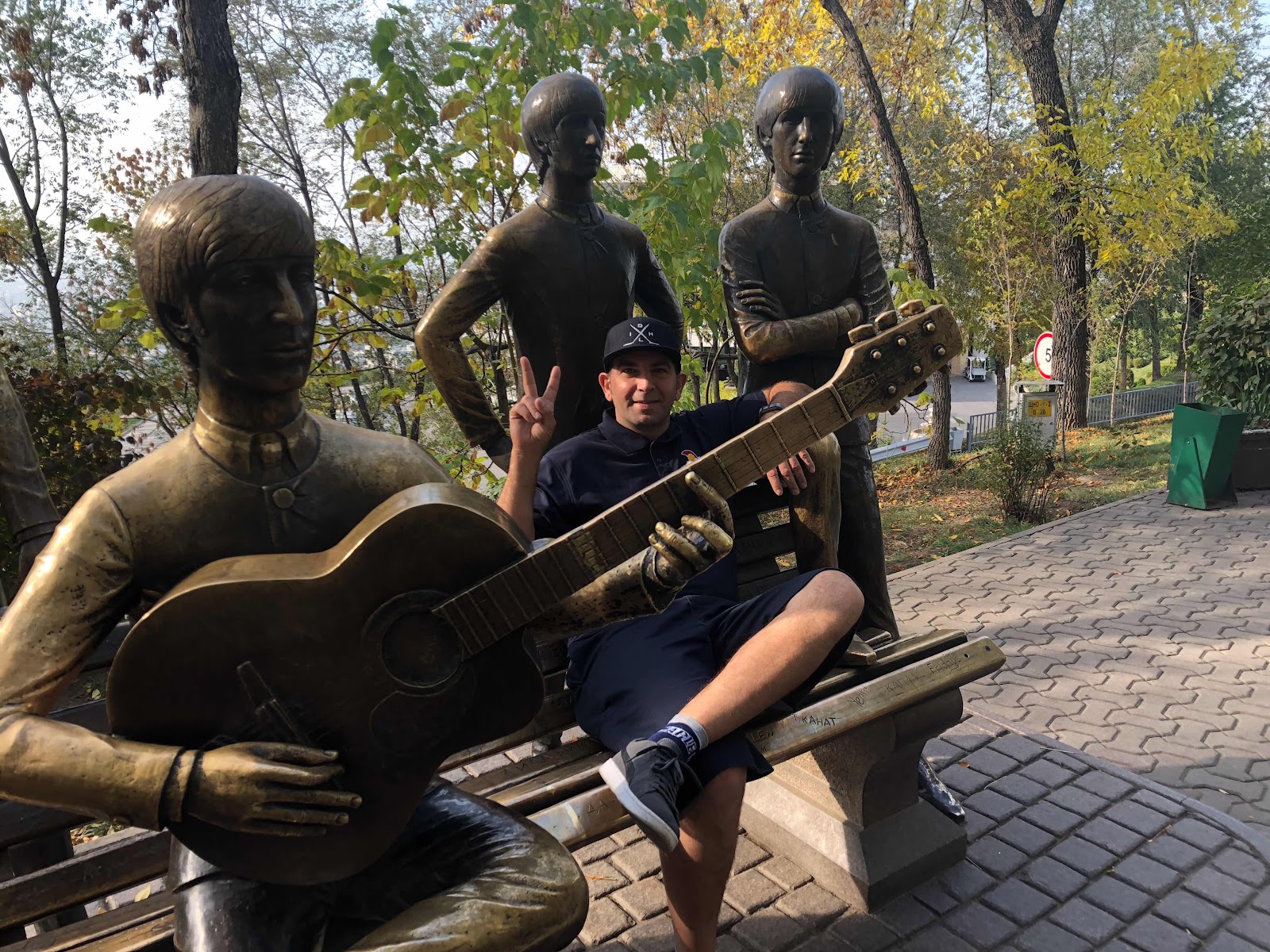 Almost forgot to mention that there is a Beatles statue up there and all I could think about was giving peace a chance as I was still possessed with anger 😤 gotta put it aside and the best way is to get on the ice which is what I did ! Walter has a good friend here that goes by the name of Tsigy which I might be spelling wrong ... sorry my friend ! He is quite the character and picked us up in the lobby in his massive SUV which he drives like he is Mario Andretti .... the streets are littered with car accidents everywhere and there probably is a good reason since driving here seems pretty mental and I’m not even sure if there are lanes and the whole concept of queueing for anything is just a fairytale here . We probably saw at least 7 collisions in our travel to and from the rink last night ! 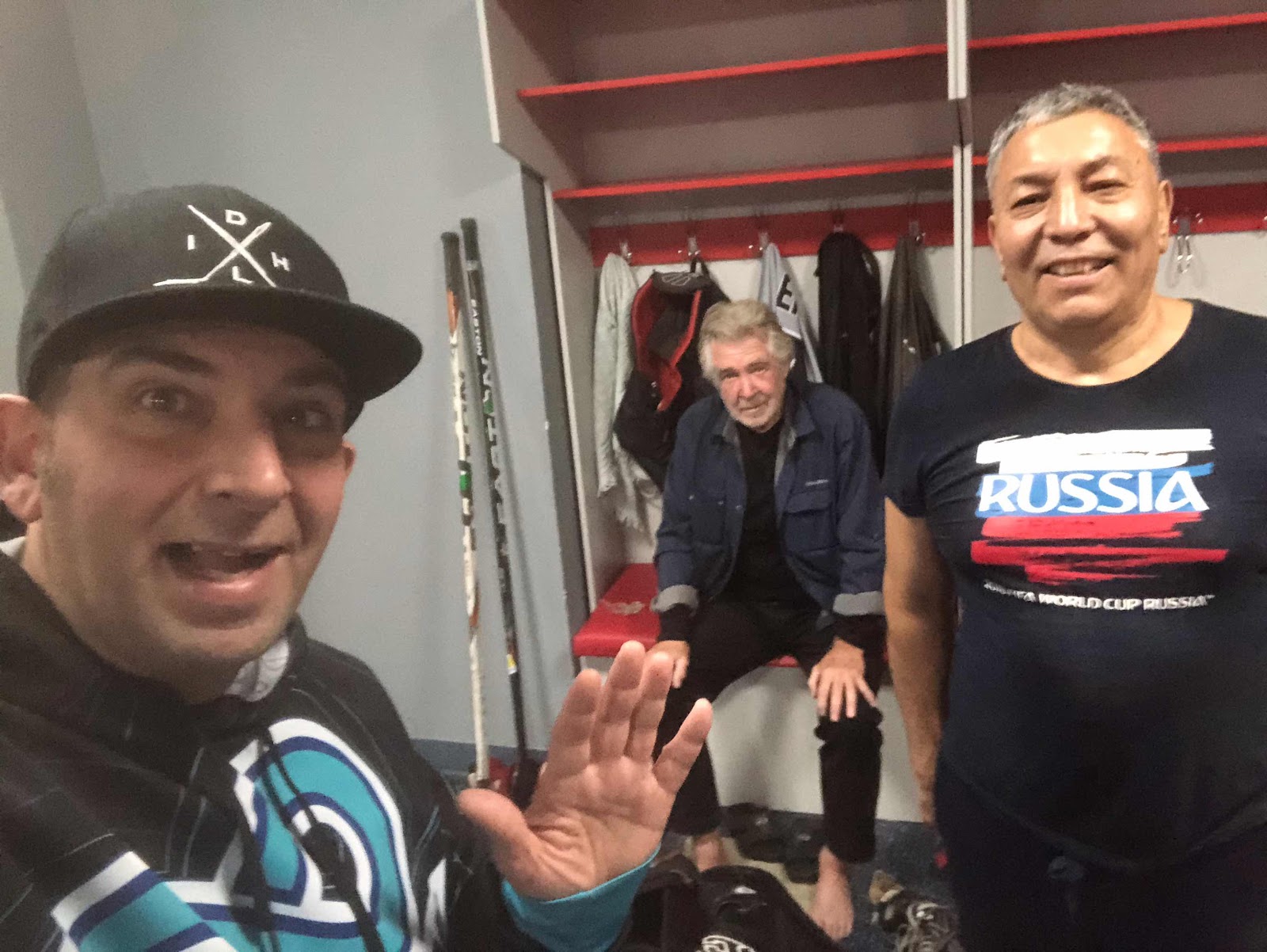 When we arrived at Almaty Arena I was blown away with how well maintained it is ! It puts a lot of rinks back home to shame and is a really beautiful
facility . We will be skating with a mixed group and playing some shinny .... I’m on the old boys team and we are playing guys that on average are 20 years younger or more ! They wiped us off the ice lol 😝 it was frustrating but good exercise as this team constantly swarmed us and my d was well not playing d .... I even had a 3 on 0 breakaway which I watched go into the net . Honestly I gave up a lot of goals and I can’t say I’ve taken this kind of beating before when visiting a country or better yet even at home .... I don’t ever remember giving up this many goals . But in the end it was fun and the guys were great even though they couldn’t speak a lick of English . I can now say I’ve played in 43 countries . 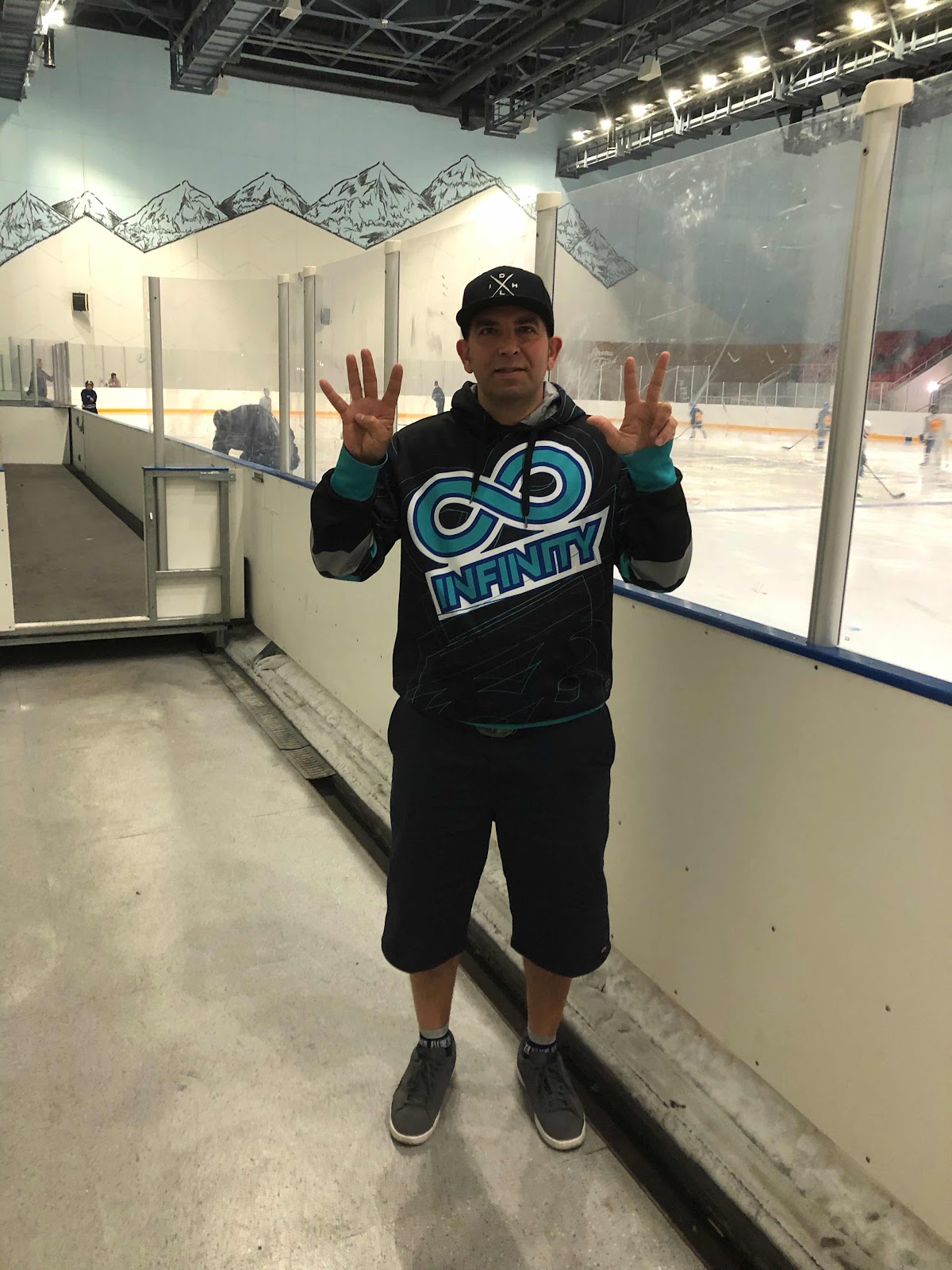 After our skate our gracious host took us to Batyroff Burger Gold and the whiskey began flowing and with every drink we had to make a speech and raise the glass and I’m sure we drank a full bottle and chugged back a few beers 🍻 and while this was all going on we feasted on everything under the sun including this amazing burger made from horse 🐎 meat ! It was delicious and now I know where the term I’m so hungry I could eat a horse comes from lol ! I would eat another horse if I could and probably will again during my stay here as it is a huge delicacy here . I know some people think horses are beautiful but so are cows and plants and and and ... you get the jist . Heck my buddy Walter even spooked a lady when we went to lunch on the mountain while we were looking at the menu he asked if they served dog 🐶 no joke he asked while I was looking at menu and she said dog as if she was questioning if that was what she really heard ... he said yes I want to eat a dog and she had this look of horror in her eyes . He was joking and laughed at her . Honestly I would eat a dog if I had to ... I hear it tastes like chicken 🐔. 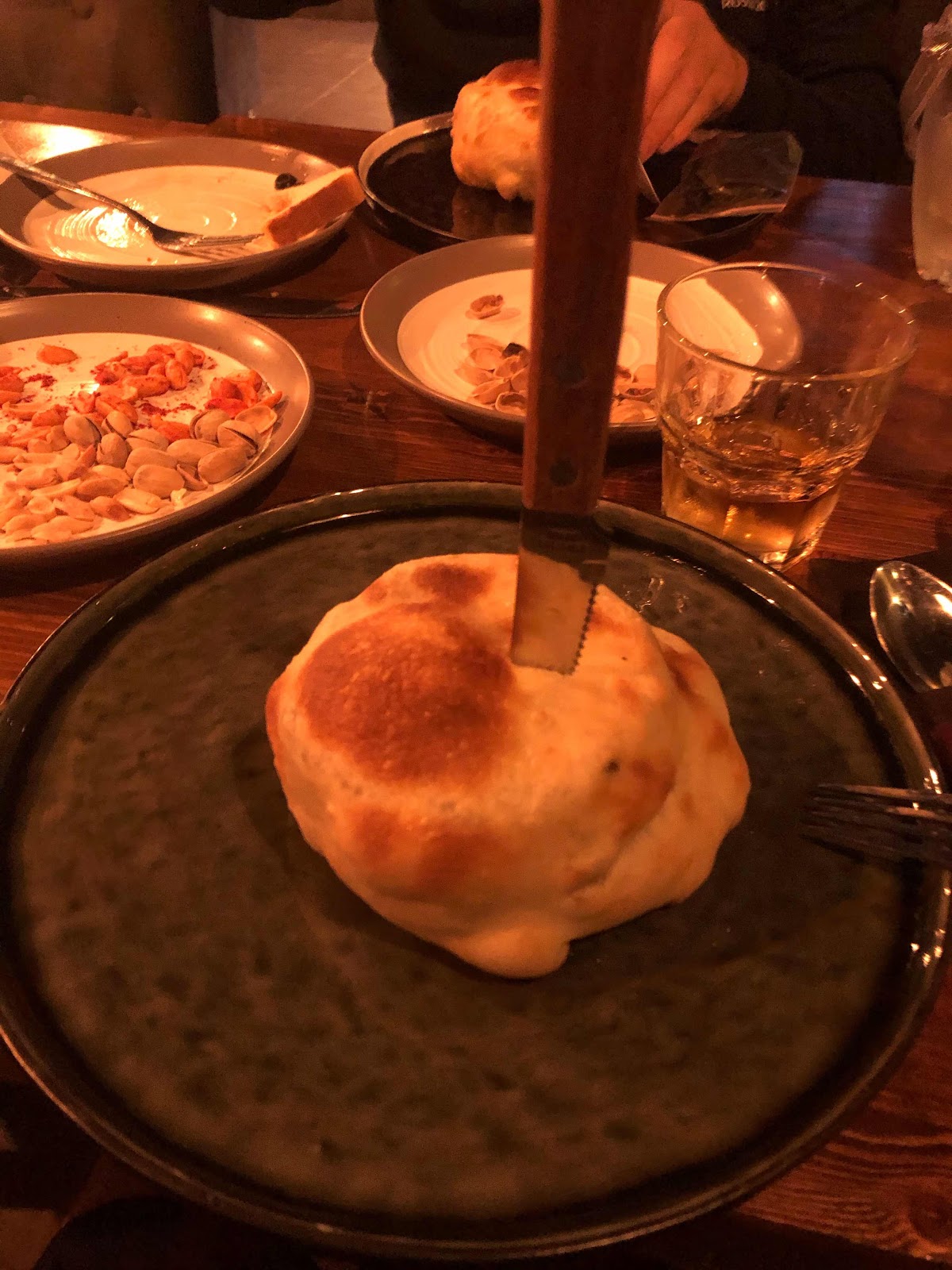 We got back to our hotel and passed out in our rooms and that was the roller coaster for an introduction to Kazakhstan 🇰🇿 I can now say I’m not angry about what happened when I arrived , I’ve let it go but I do hope the two cockroaches get some bad karma .... I’m still waiting for this good karma to happen to me on this trip . Maybe it will come in the form of a breakaway save or something ? Oh and before you go screaming demons about my diet here ... please enjoy what you’re eating because I probably don’t like your diet but I won’t bother you about it and keep your dogs on a leash hahaha 😆 and if you take me too serious you might not really know me .


Posted by The Travelling Goalie at 1:55 AM