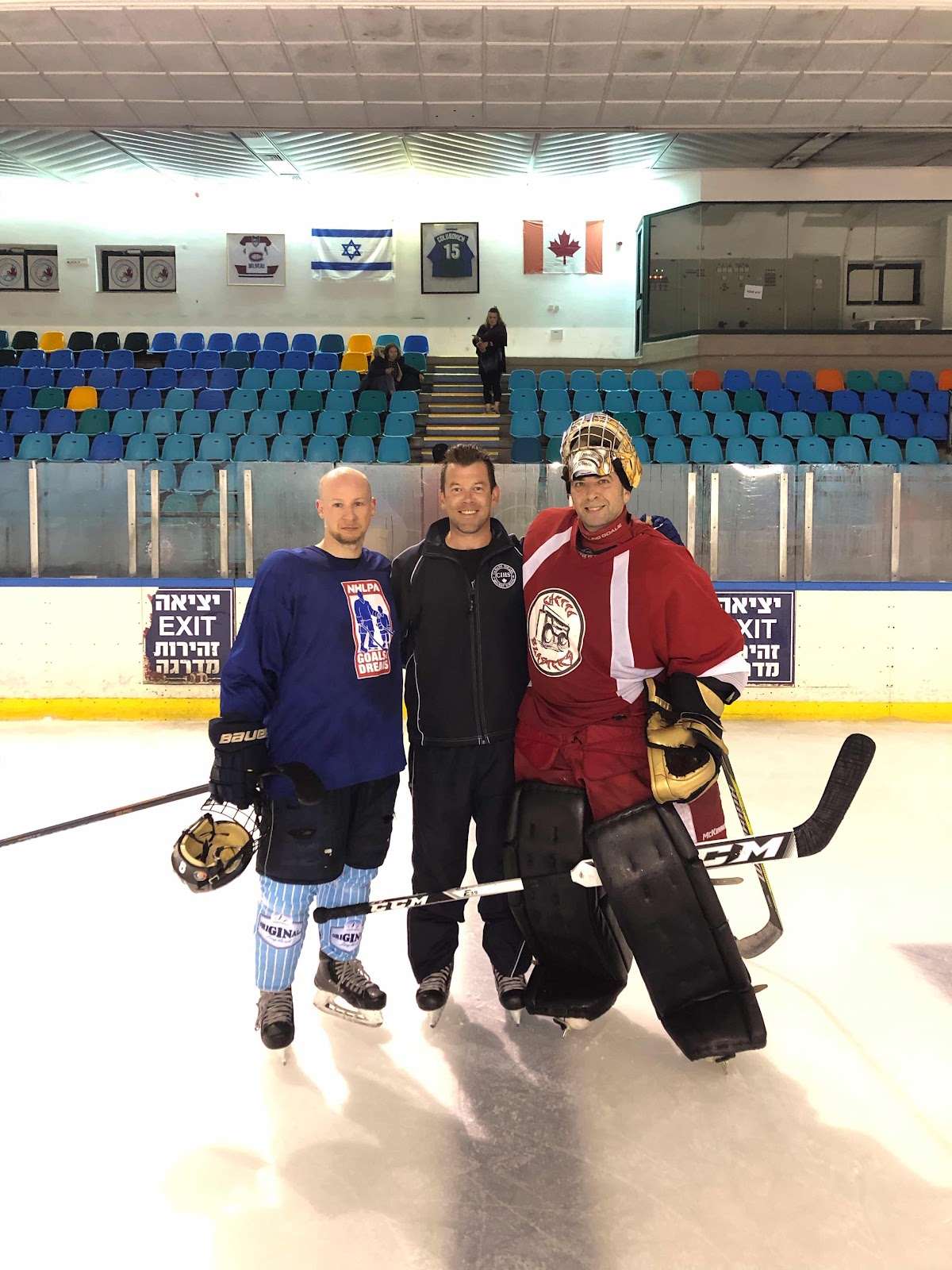 What a fun filled packed day yesterday was ! Began our day in Jerusalem as we had to check out of our shitty hotel to get to our free parking spot that we had to pay for 😤 as I did say the staff were wonderful though and I can’t take that away from my stay at Hotel Azzahra . It’s the only positive thing and when we left we were given Palestinian posters which was different .... don’t usually get parting gifts from hotels , would have much rather had a discount since we didn’t have wifi , tv , free parking , laundry and even the restaurant closed early on one of the two nights we stayed . So you can imagine how happy I was to high tail it out of there . Regardless I had a great time in Jerusalem and two days is really all you need there and yes I suggest everyone going whether you are religious or not . 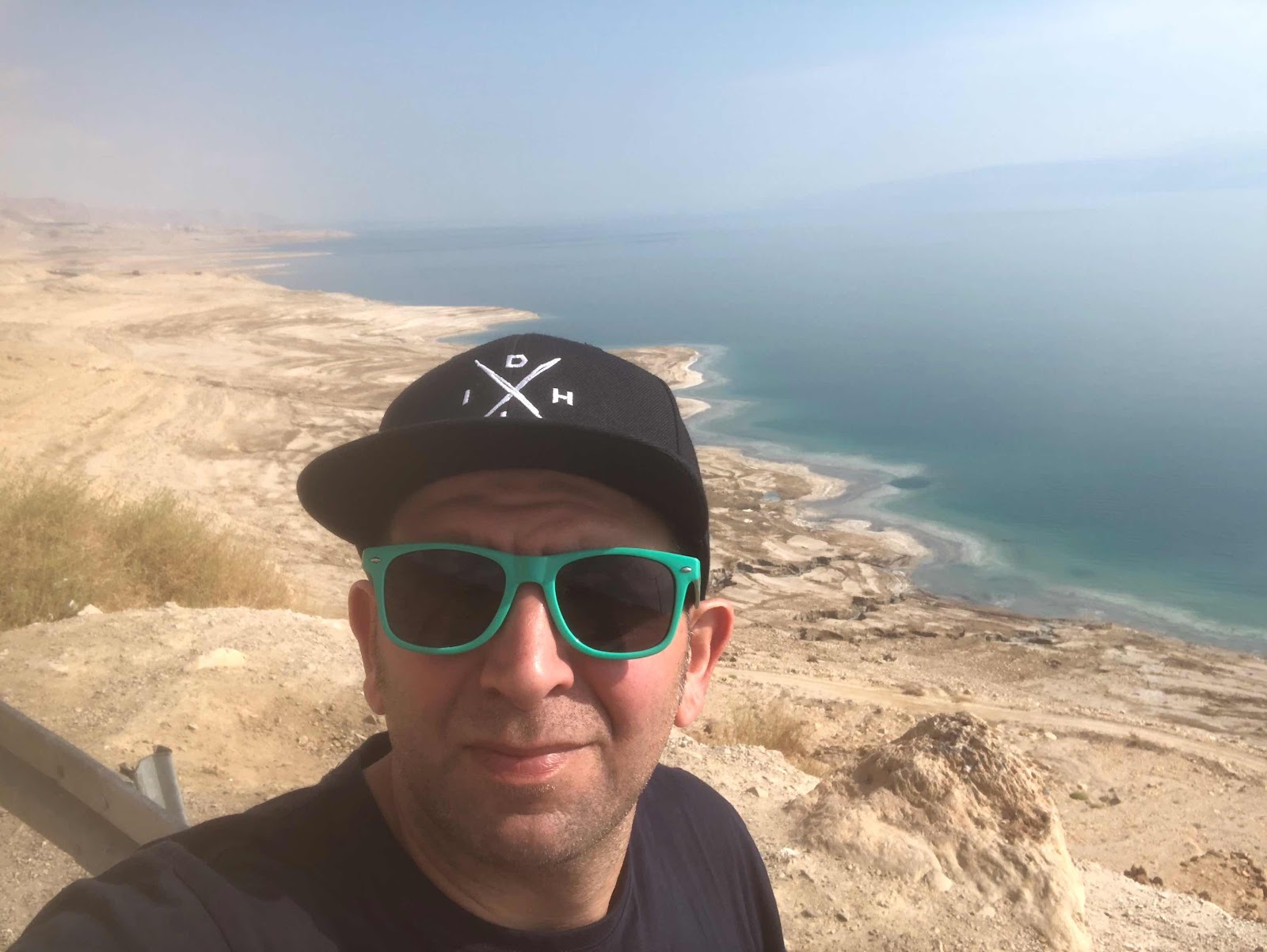 We started driving to the Dead Sea and the plan was to go to a town called Ein Gedi which has a nice beach that should be free to the public but when we arrived there it was totally shut down because of the giant sink holes which have caused major problems . The Dead Sea is more like a lake when you look at it and it was hazy over the water from what I assume is the condensation for salty water .... the plan was to just take a dip and hit the road to go north to Metula to meet my buddy and get on the ice so we turned the car around and started heading north to the northern tip of the Sea which is a 20 minute drive where we found another beach online not far from a town called Kalya and when we arrived there it looked like a place that time had forgotten , it was mostly abandoned buildings ! 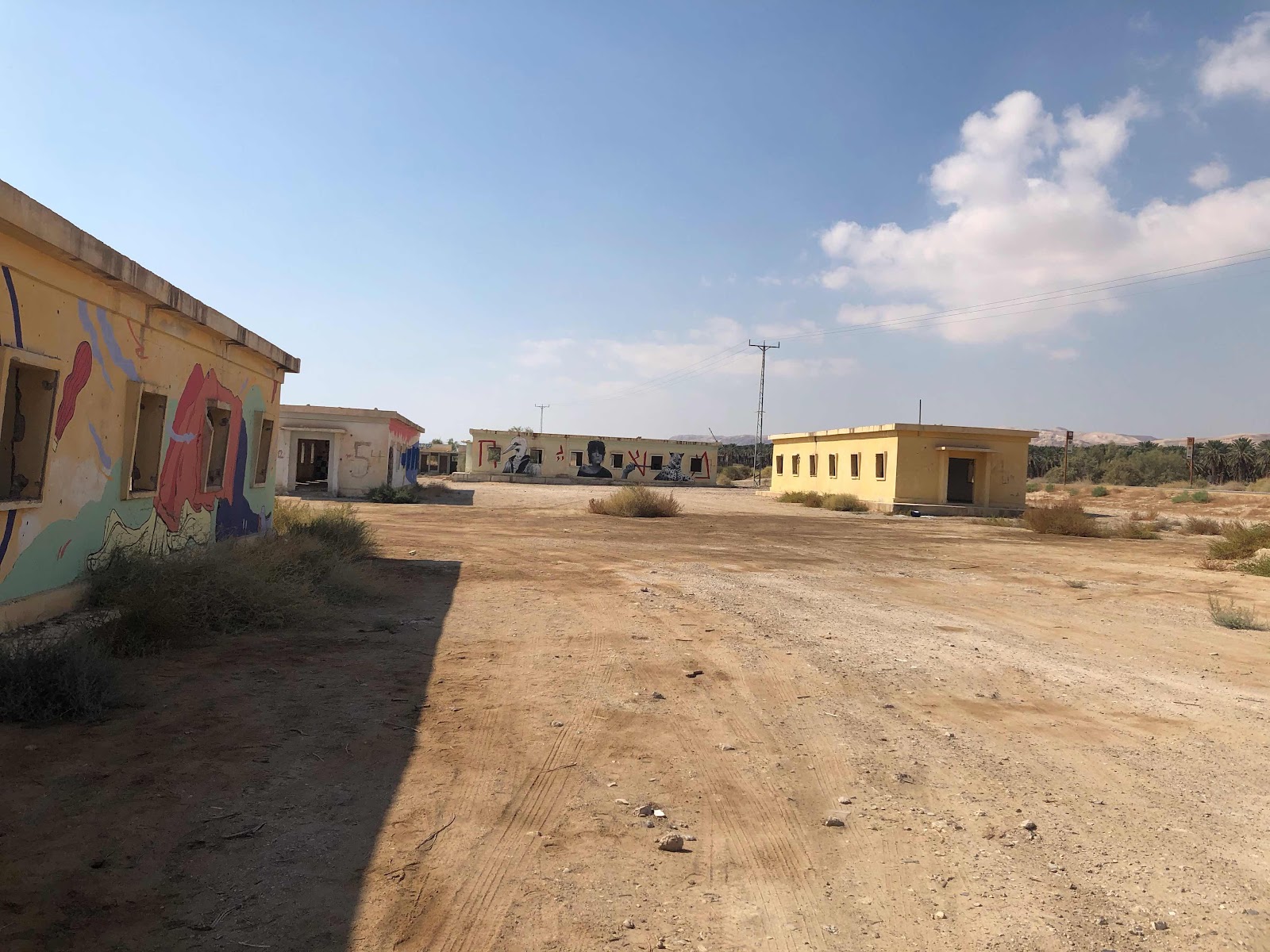 The Dead Sea is really dead in every form of the matter , no people , no business , and no free beaches .... yes there was one guy at every entrance charging 80 Shekels to enter this abandoned area to swim after trekking through muddy unmaintained paths . Don’t even ask if I did this , I’m not even remotely interested in dropping $30 to go into water for 5 minutes ! I’m not a beach bum and I’m definitely not really interested in swimming in anything other then a pool . I did try at some other beach areas but the same outcome , pretty much abandoned areas with one guy collecting money from people that want to spend the day at a very unkept beach .... it was a bit depressing but we just packed into the car and carried on . We saw the Dead Sae and I can live saying no I didn’t go in 😆 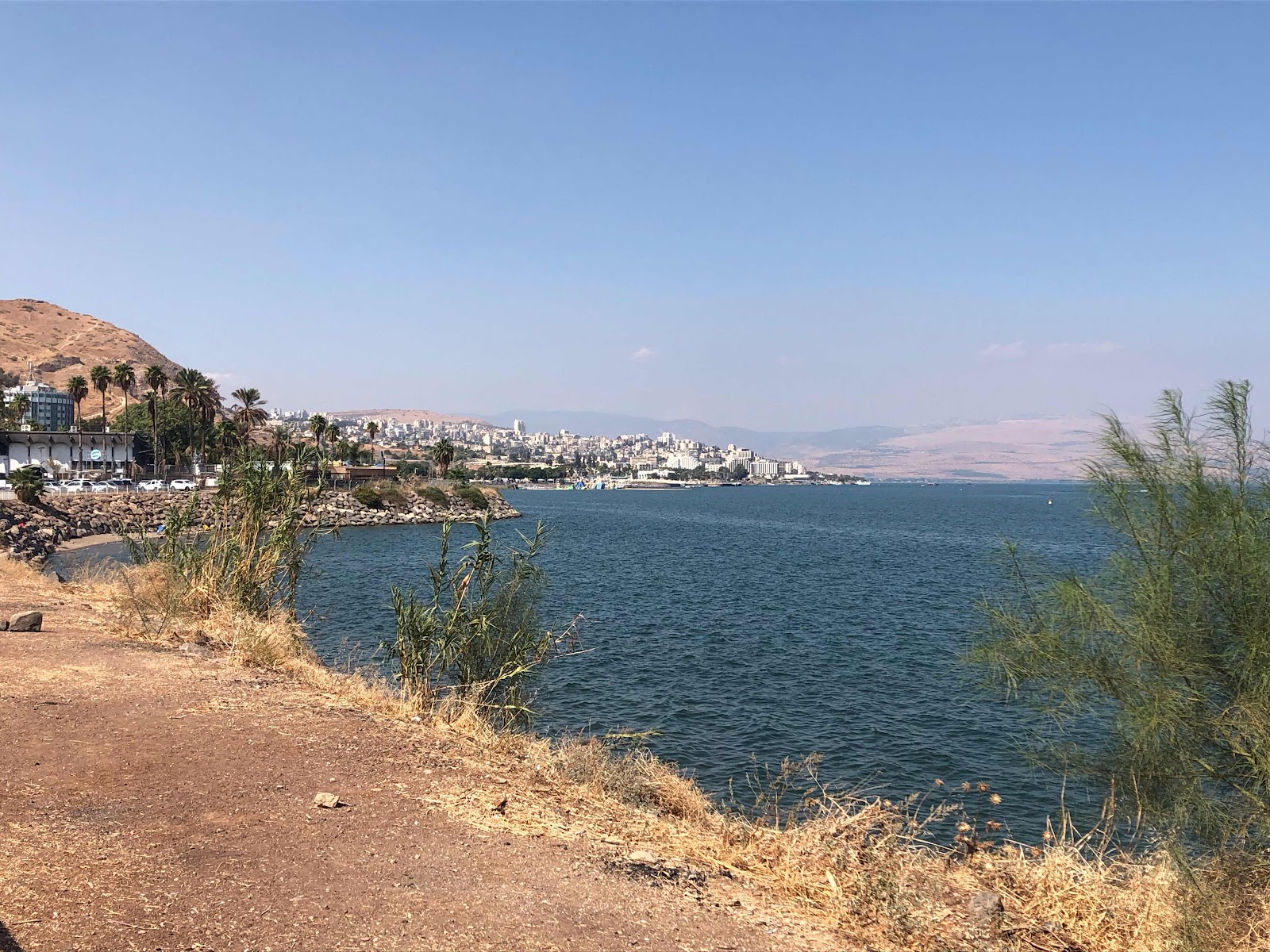 After that minor disappointment we drove north and made a gas pit stop and a McDonald’s pit stop before stopping by the Sea of Galilee which also is a lake in my opinion hahaha ! Here we at least got to put our hands in the water and honestly it looked much nicer then the other lake we visited 🤪 that was the only other stop we made on our trek to play some puck .... the rest of our trek was spent listening to music through YouTube videos which kept us entertained . I drove the whole time as I booked the rental under my name and I don’t mind driving and I’m sure Andi doesn’t mind it either . 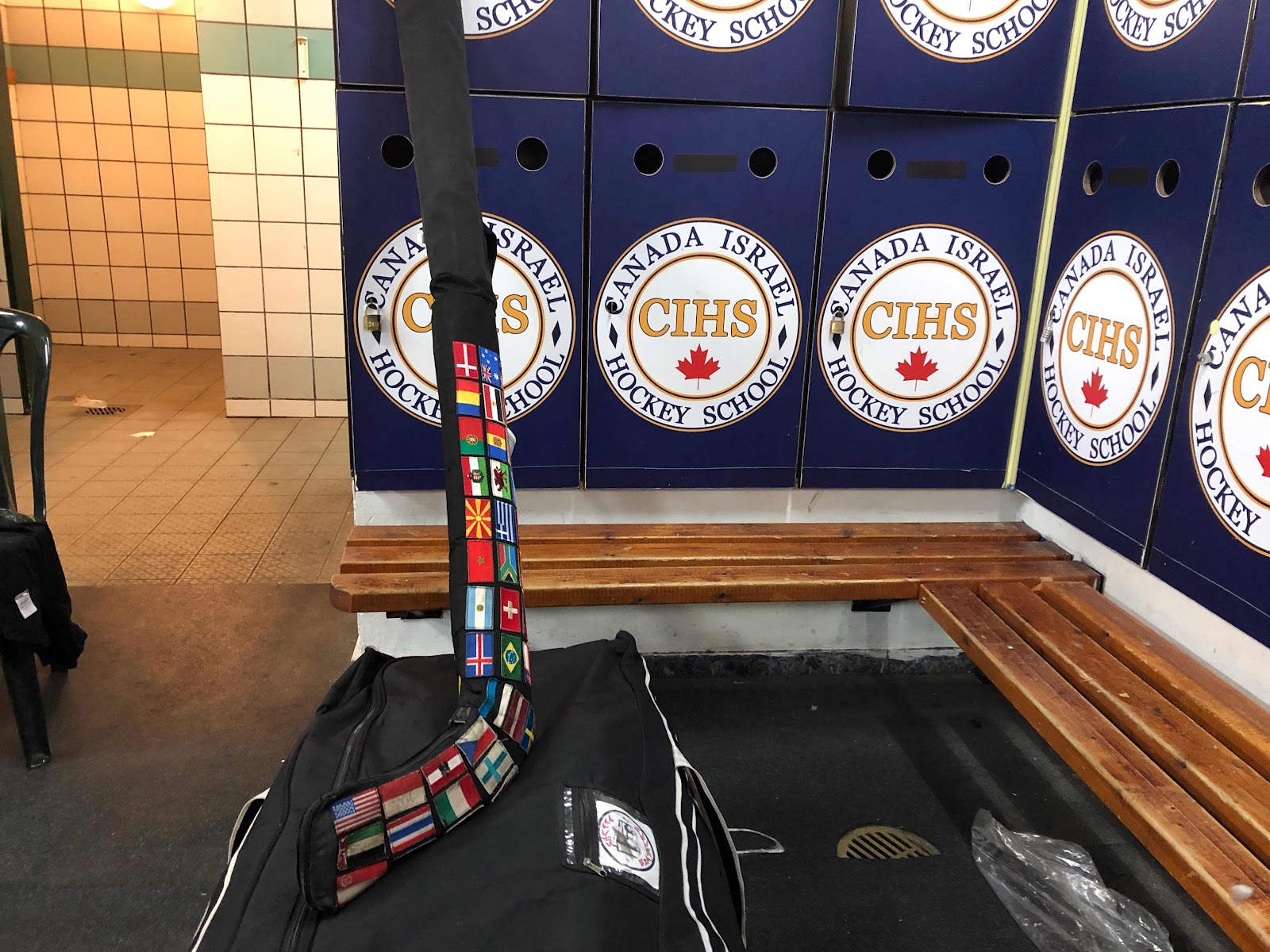 When we arrive in Metula we found our hotel rather easily and checked into  the Travellers Lodge and found out we were the only ones booked in for the night ??? We were told we could make as much noise as we wanted and let me promise you that we did !!! Soon after arriving we met up with Shakes and he graciously let me do my laundry as we met his family for the first time and they were really nice , it was such a pleasure to finally meet them after hearing so many great things . Shakes is a coach/teacher here and had to get to the Canada Center which is where the rink is amongst other facilities like a pool and gun range (?) the kids in the hockey program get to the rink early to do some pre skate warmups but were unfortunately interrupted by the figure skaters who always mess things up for us hockey players and we are always fixing their mistakes ! Just joking , ease up lol 😝 but truthfully they had made a mistake when booking the gym and in true Canadian fashion Shakes let them use the facility and the hockey kids got to jog around the building instead . The figure skating coach should have been happier and more thankful but she wasn’t and had a look on her face as if it was Shakes fault that she confused her days 🙃 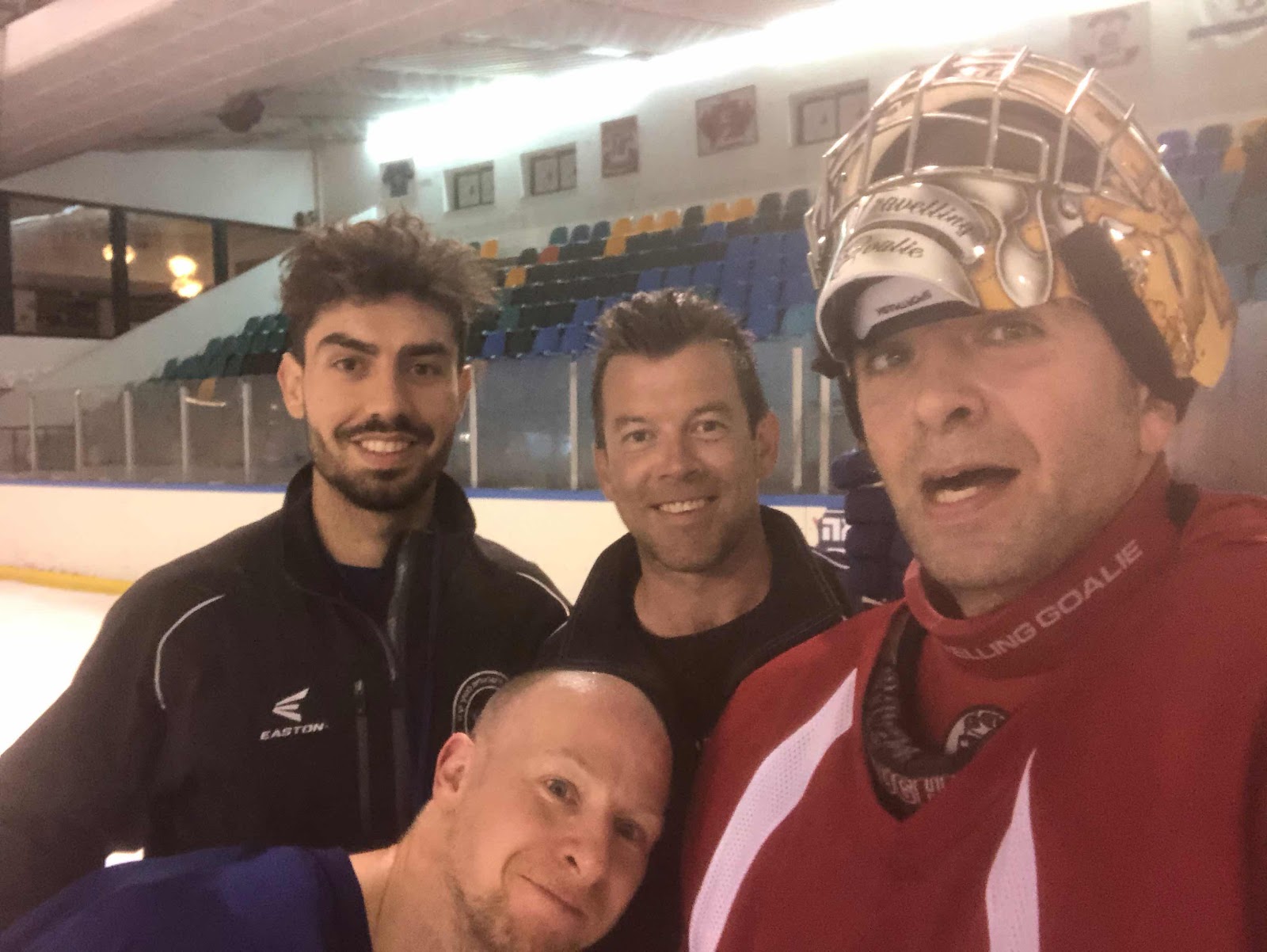 We met a few of Shakes’ colleagues and friends and team mates and they were all super cool and friendly and were quite intrigued when finding out why we were here . We then went to the dressing room to get ready to skate and met most of the kids who were more curious then some of the adults in the room . I placed my bag in a corner of the room and when I came back there was an older dude sitting there with a look of discontent on his face so I graciously moved out of his way but I thought it was weird since there was so much empty space and I can only guess that this is his spot . Everyone knows in hockey certain players always take certain spots and usually goalies get the big spot as some rooms can be tight but this was nowhere near that .   When I got on the ice it felt pretty dry and I almost lost my edge upon entering which would have been awesome ... thankfully I stayed on my feet and no one noticed or at least I thought so . The ice was split in two half’s with 4 different groups of skill level and age groups . As far as I know there were adult beginners , young children and there were a couple groups of better skilled players with the older ones playing in one group and younger ones in the other and Andi was with the older experienced players .

First things first though ! Shakes puts me and the other goalie through a warmup and then has a couple breakaways as I gained a new fan in the form of the other goalie who loved seeing me stop Shakes on breakaways .... I didn’t stop them all but I did make a sliding save where I was on my stomach and made a save with the back heel of my skate . And unfortunately none of the goals Shakes scored one me are worth talking about LOL ! Those that know us both know and I’m leaving it at that ok 👌 Andi got to enjoy some skating drills , we all love drills hahaha 😆 after drills we had split the ice and played sideways with two games ongoing and where my net ended up I was right beneath a leaky part of the roof where condensation began showering me and it felt like I was in a shower as drops kept hitting my face mask more and more as the hour went on . Couple guys scored nice goals on me , but one kid undressed me big time and Shakes skated over to tell me how this kid has been under his tutelage for years and honestly you could tell .... the kids got skills ! Even one of the adult beginners can tell his grandkids that he popped one by me and we all had a good time . It’s great seeing everyone around the world enjoying the best game you can play ! The good ol hockey game ! 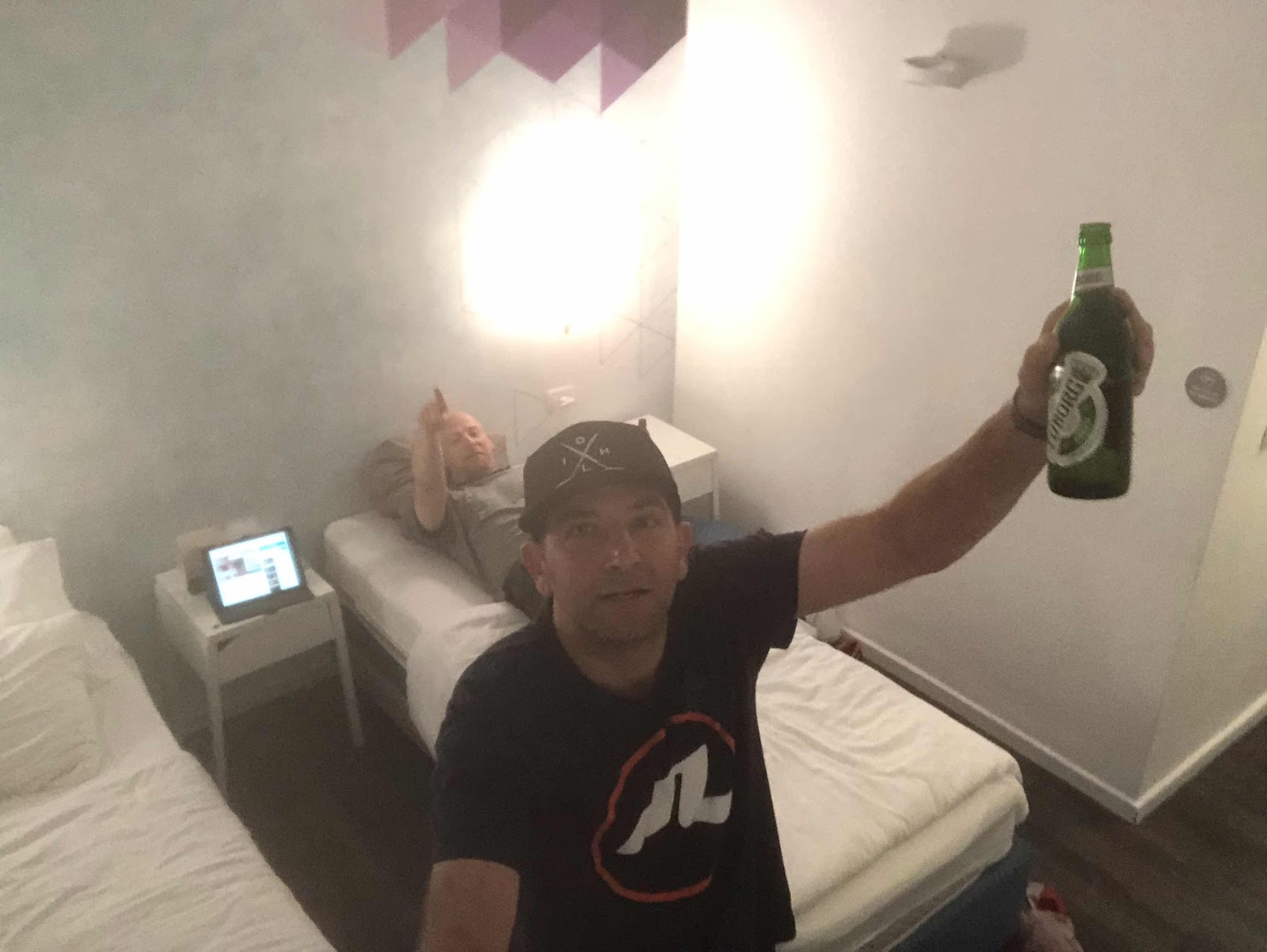 After the skate we went to the local shop around corner from rink and yes everything is around the corner from everything in Metula as it’s a really small town with a population of roughly 2000 people and is located at the most northern tip of Israel and is surrounded on 3/4 borders by Lebanon and Syria is really within spitting distance also . Will talk more about that tomorrow . While we were at shop we had a couple wobbly pops and got into the local IPA which was amazing and probably the best beer I’ve had all trip . Apparently micro brews are popping up all over the place here which is great 🍻 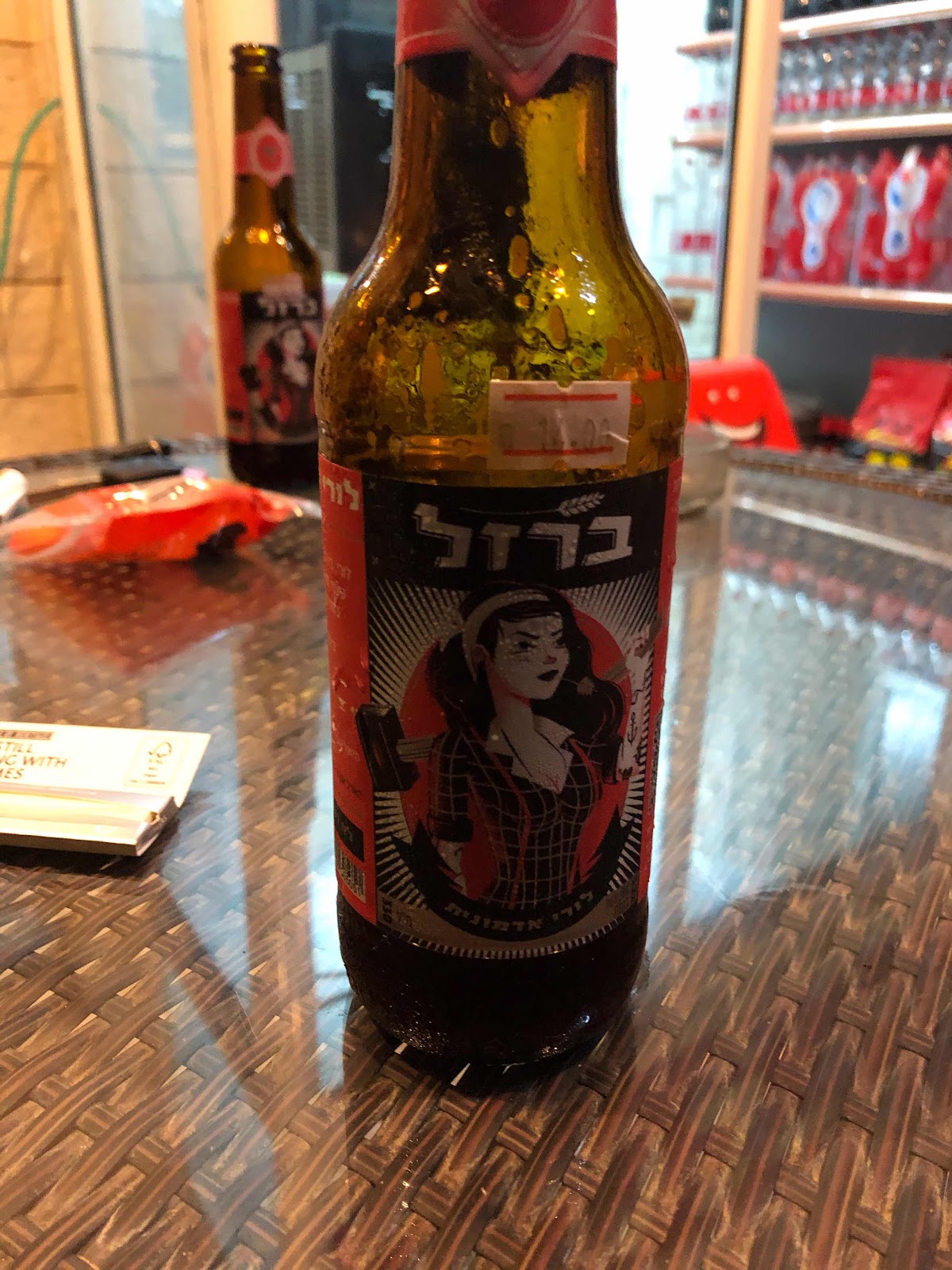 Liquor is sold in the shops until 11 pm and we went to the pizza shop a couple stores down the main strip which we are also staying on and we grabbed a couple pizza’s , Andi and myself shared a pizza with black olives , onions and pepperoni on it and it was really really good. If you’re ever here don’t miss out on this place which I wish I knew the name of .... the name was spelled in Hebrew which I can’t read unfortunately. After a couple beers and a few laughs there we called it a night and Andi and myself grabbed a couple roadies and went back to our hotel which as I said we were the only people at  . When we arrived I decided I wanted more beer so we went back to the shop which was now closed and then ended up in the pizza parlour buying more beers ! And and myself went back to our hotel where we did our best to wake up the dead and we screamed yelled and drank until we passed out ... as far as we know there was no attendant there either but I’m sure if they have video someone saw some questionable shit happening . That’s another story .... 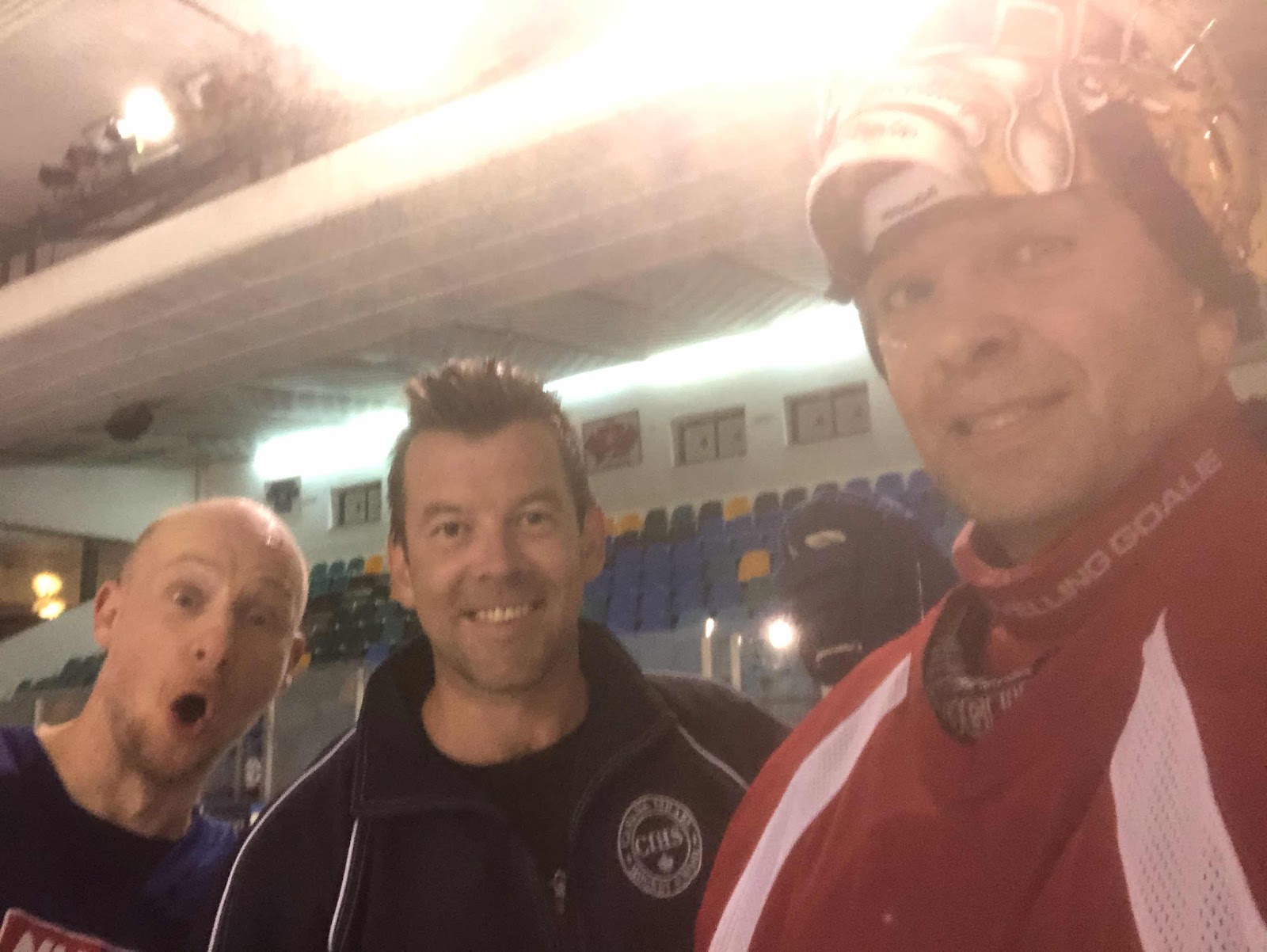 What a great night we had here in Israel playing hockey and hanging out with our old buddy Shakes ! Gotta send a shout out to the Canadian Israeli Hockey School for having us as guests ... can’t wait to get on the ice tonight again . ✌️

Posted by The Travelling Goalie at 9:47 AM