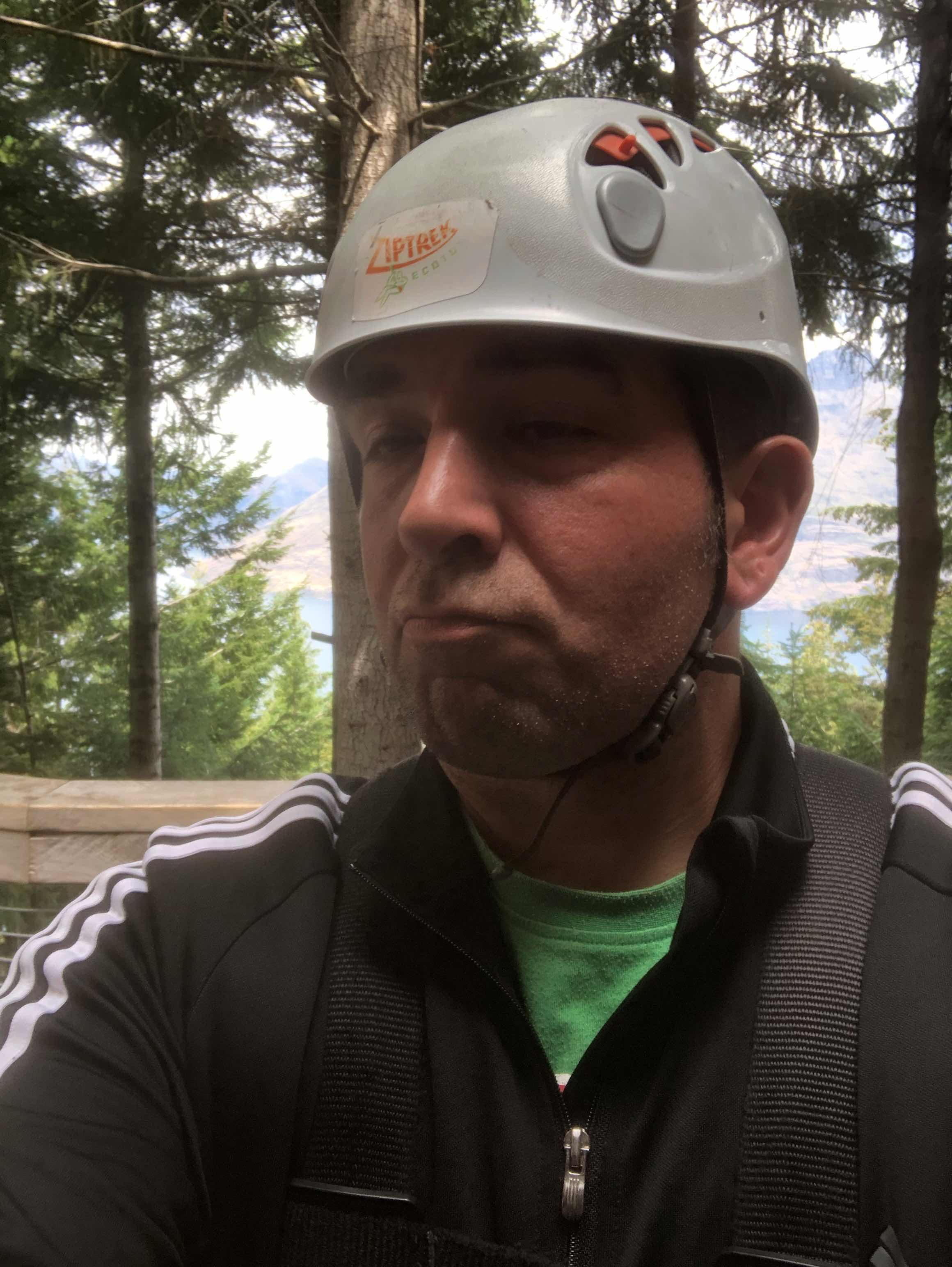 It’s always asked what I get out of this travelling around with my gear to play ice hockey 🏒 and I always say the same thing .... you don’t get to meet the people I meet just travelling ! Ice hockey always has tight knit communities all around the world with solid people and as you all know I’ve met some doozies on this adventure like Justin , Cam and Drew who have all went above and beyond to make sure I enjoy my stay here . Thank you all if you’re reading this . Drew who is my contact here on the South Island in New Zealand 🇳🇿 hooked me up with his friend at Ziptrek so I could go zip lining for my first time ever . He used to work for them and is still in touch with a lovely gal named Jess who sorted me out with a solid discount to go down the steepest zip line on the planet over in Queenstown which is the worlds capital for adventure and as I said before is a huge tourist town and yeah it has its ups and downs but you gotta come here to do all this crazy stuff . I would come back to do other things as I have my two days filled with adventure already and should probably graduate to something crazier after abseiling and zip lining .... maybe jumping out of a plane is next ? Who knows .... 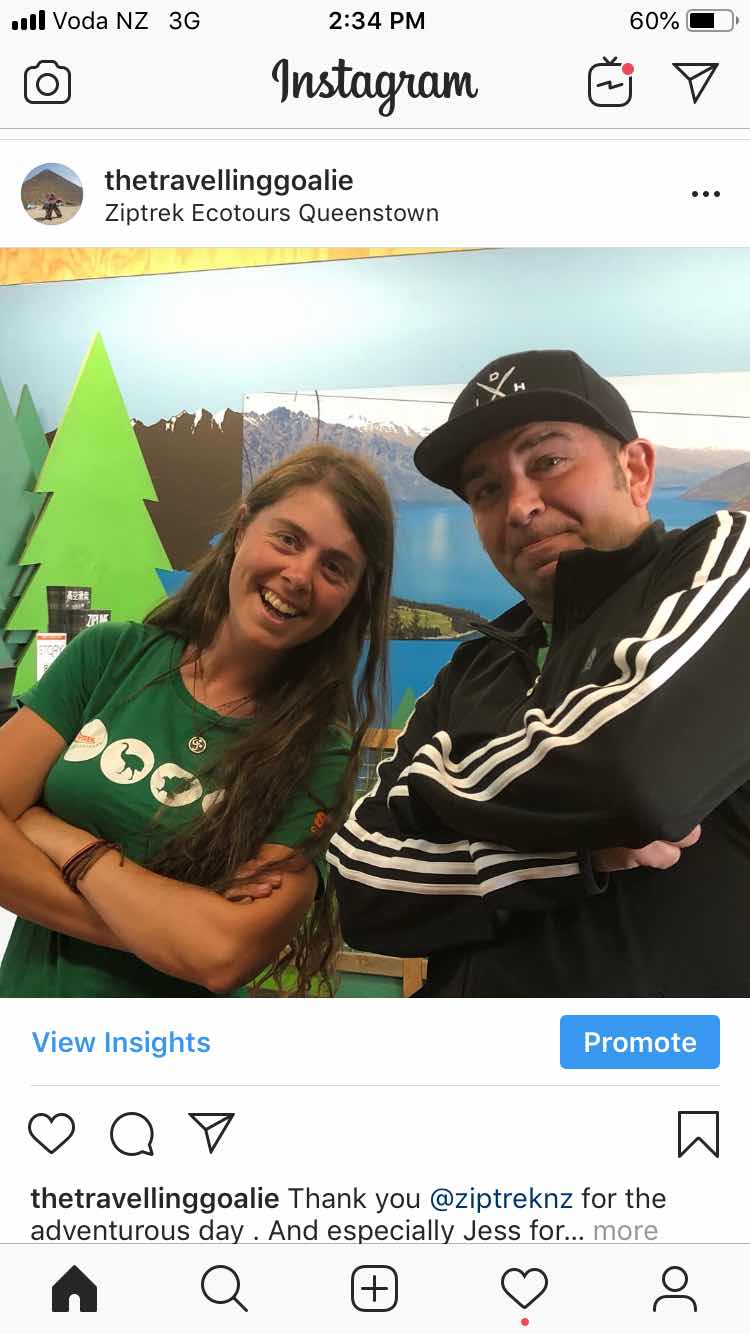 We started our day as usual on the hunt for some coffee and ended up at this shop called Fergbaker which is a chain of shops belonging to the same company , there is a Fergburger and a Mrs. Ferg Gelateria  and of course they are most famous for their pies . With coffee in hand we opted to go check out the rest of the stores belonging to the infamous Mrs. Ferg . The lineups during the day are absolutely bonkers with the line running around the block at times and I wish I was exaggerating , but at this time there were none as the burger shop was just about to open and the bakery was already starting to fill up . We got served immediately and grabbed a sausage roll and a pie to take back to our room to test out . The sausage roll was probably the best I have ever had 🤤! No joke it was amazing 😉 and the pie which we had to have since it’s a huge thing here in NZ was yummy too and I have not tasted others but I would say it’s the best I’ve had also since I haven’t had others .... the sausage roll will have me dreaming for another for the rest of my life though and I’ve spent a lot of time in England where they love their sausage rolls . We had some time to kill and opted to chill and save up our energy for the zip line and did a bit of walking around town and found some groceries and went to meet Jess with a hot chocolate to say thank you and meet her . She was really lovely and helpful in giving us some advice on where to eat and grab ice cream 🍦 Kathleen needs her fix . Maybe that’s why I’m getting so chubby ? 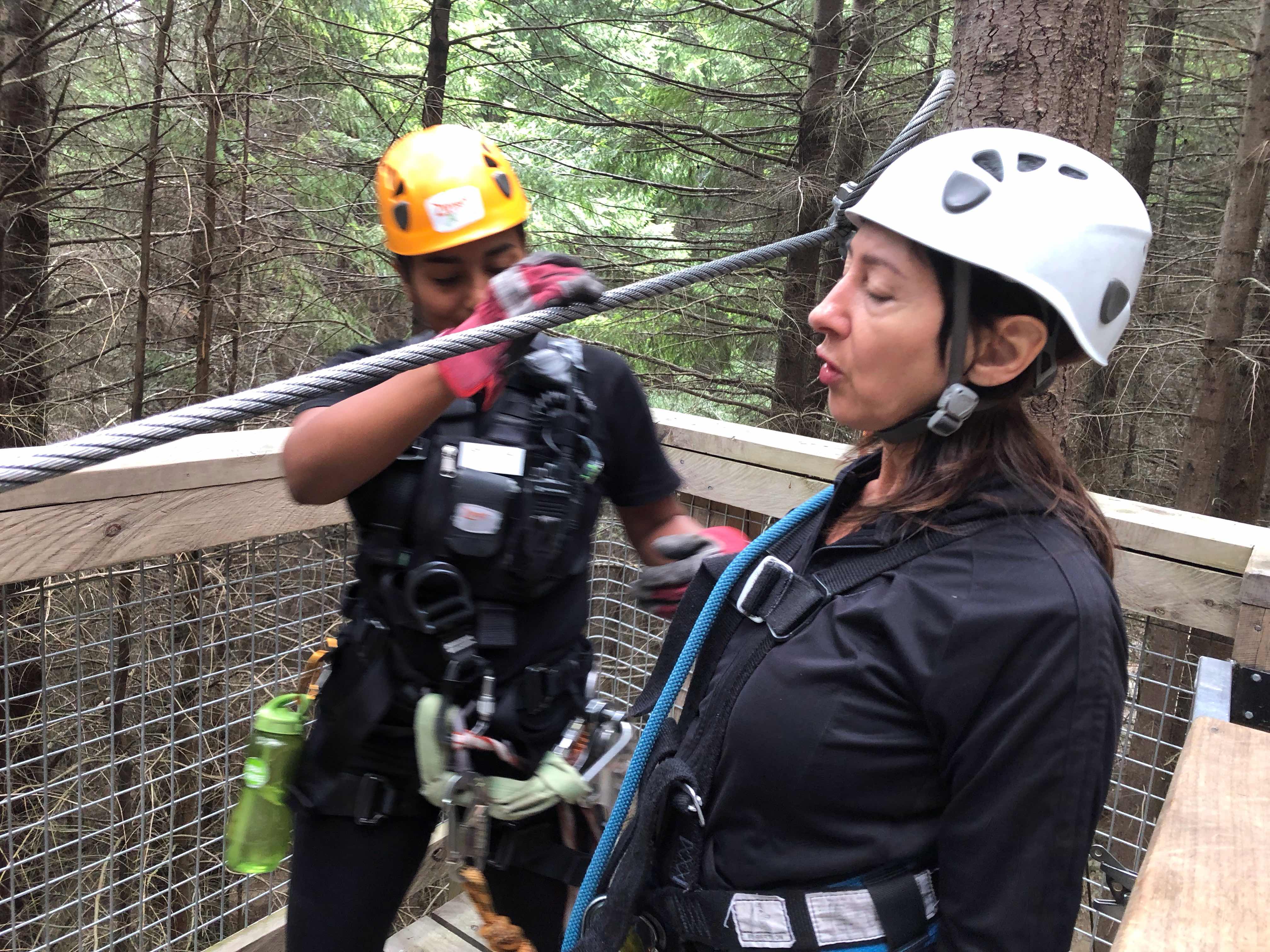 We were told the best thing to do was to buy our ticket for the gondola up to the zip line in advance and there is a small shop across the road from Mrs. Ferg’s place which is never busy so we went there grabbed our ticket which was about $39 and that is a two way ride regardless if you are taking the gondola back down or not . I know that sucks but we already knew this and there is no use even discussing it .... sometimes you gotta bite the bullet ☹️ we were also told to go up to the Ziptrek tree house about 15 minutes before our booking and we should expect long lines for the gondola so we should line up an hour in advance . When we arrived at the gondola we walked by the whole lineup because we already had tickets and didn’t have to even wait more then 5 minutes to get on and make our way up . The view from the top is amazing and it is not so busy which is great . Kathleen spots the gin she’s been trying to get a taste of and gets herself a drink ... it’s called 4 Pillars Bloody Shiraz and it’s really good . Neither of us were disappointed and now we have to hunt down a bottle . I’m sure it’s at duty free in Australia somewhere . 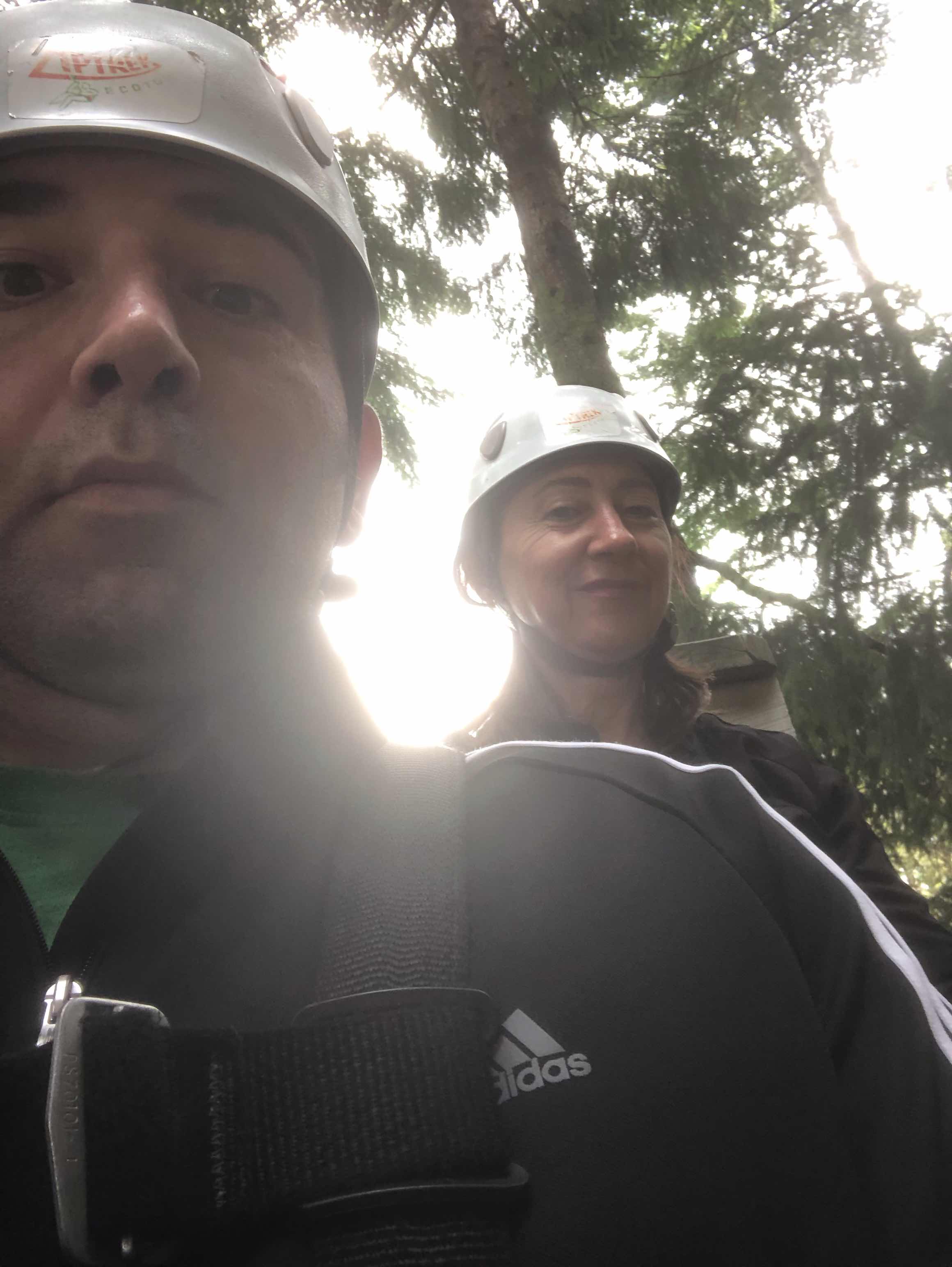 Now you are probably wondering g if I was scared to do this ? Believe it or not , I wasn’t .... I was more excited to do this kinda like the excitement I get when I’m going to play hockey . This was all about fun and if anything I had more fear when I went abseiling . It wasn’t really easy finding the Ziptrek treehouse at the top of the mountain ... not too many signs pointing in the direction and they should probably put some up where all the mountain bikers are heading off from the gondola . When we got to that point we were lost and didn’t want to walk onto the bike path so we turned back and went inside to ask for some re-assurance that we were going in the right direction . So if you get there and feel lost just look past the path and you will see the treehouse and that is where we had to sign our waivers and we met our two guides which I can’t recall their names but one of them was a gal from Toronto and actually we had another woman in our group from Toronto so we talked amongst ourselves quite a bit about home . The woman tourist from Toronto actually works for a an ad agency in Toronto in the same business as I do for a company called Publicist which I have heard of so we had some chats about work shit too .... kinda miss everyone I work with and I can’t wait to see everyone but for now I’m gonna keep on keepin’ on with my adventures . We had 6 zip lines to do and the first 3 were shorter then they got longer and longer until we reached the steepest one in the world which actually didn’t look so bad when you look out at it .... fear was not a factor ! I survived and smiled the whole way and would highly suggest trying this if you’re into hurdling yourself off ledges like I’m now getting more and more into ... I’m seriously thinking about skydiving . 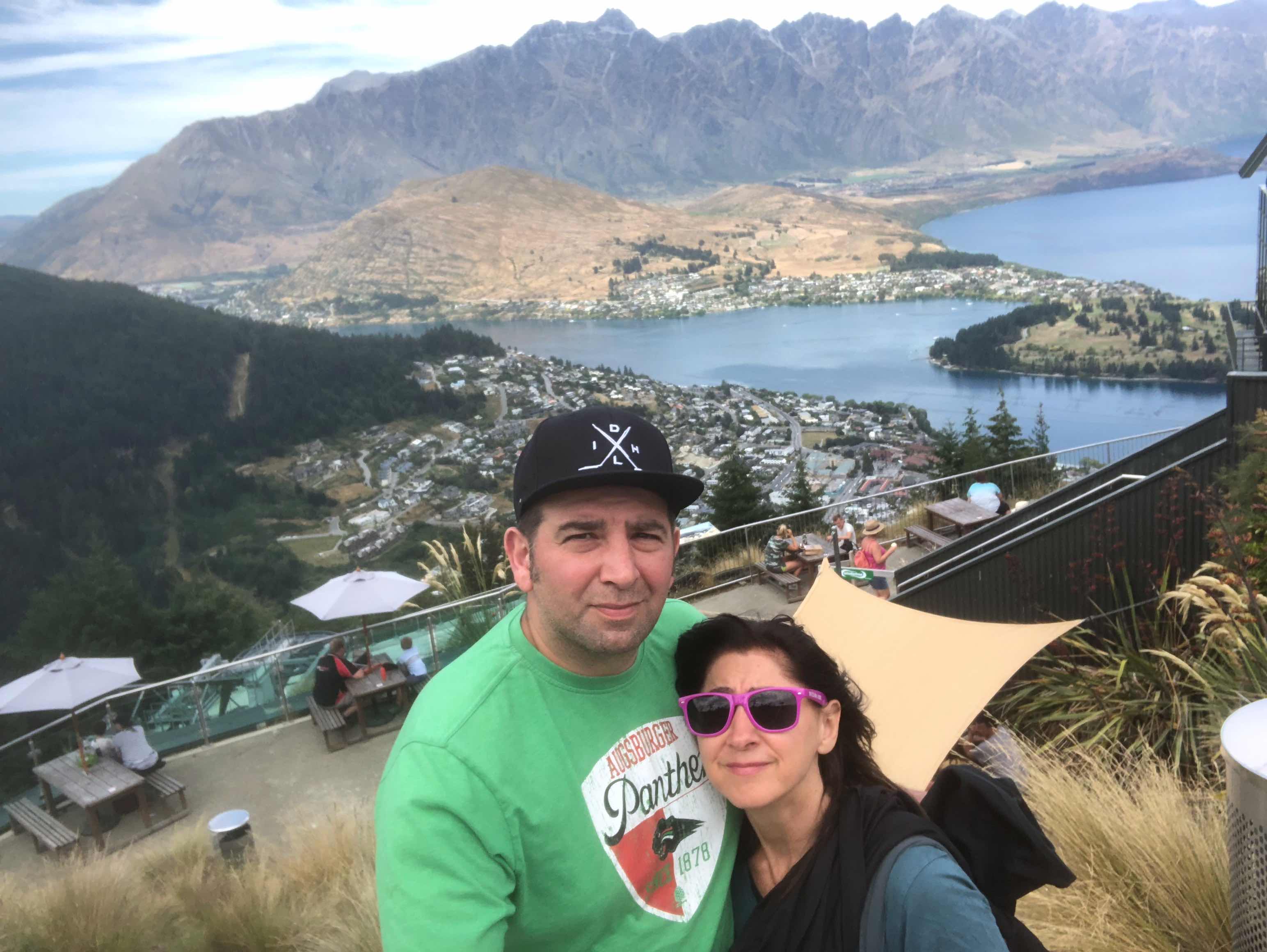 After our zip line we headed to our room and booked a table at Flame Bar & Grill which is a South African bbq restaurant or should I say braai? Braii is what South Africans would call bbq and if any of my South African mates tried this they would say its lekker which means good ... I wish I knew how to say awesome because it was beyond delicious 😋 the reservation we made was for 915 pm and waiting for that was a bit painful so we opted to work on the bottle of Bombay Sapphire we had with us and sit on our balcony while watching hitchhikers catch rides and I did my drunken commentary making fun of them to entertain us . For some reason there seems to be a spot across from our hotel where hitch hikers frequent ? It’s been years since I’ve seen hitch hikers and it baffles me how someone with a $600 phone and designer clothes on can’t afford to take a bus ? Priorities are a must I guess ... not for me as I’m not that ghetto lol 😝 when the time came to head to the restaurant we were hungry and I was trying to stay within budget but the more I saw food passing me to other tables the more I got hungry as everything looked really really good . I went in with thoughts of having chicken but then changed my ideas to steak 🥩 and the only thing I regret is not getting the larger sized sirloin which was cooked to perfection 👌I always order my steak medium and a lot of times it shows up over cooked and this meat had the right amount of pink in it and was accompanied with a mushroom sauce that was on the side for dipping which was awesome . Kathleen had a salad with chicken and that was massive and really yummy too , she was really happy with it and I would say this has been one of the best meals I have had so far on my trip . I don’t think you could go wrong with anything at this restaurant ! The skewers looked awesome and the chicken meals looked scrumptious also and if I had the chance I would go back again but this is our last night in Queenstown and as much fun as we are having here we are both looking forward to getting away from all these tourists and hitting up Wanaka next for some relaxation . 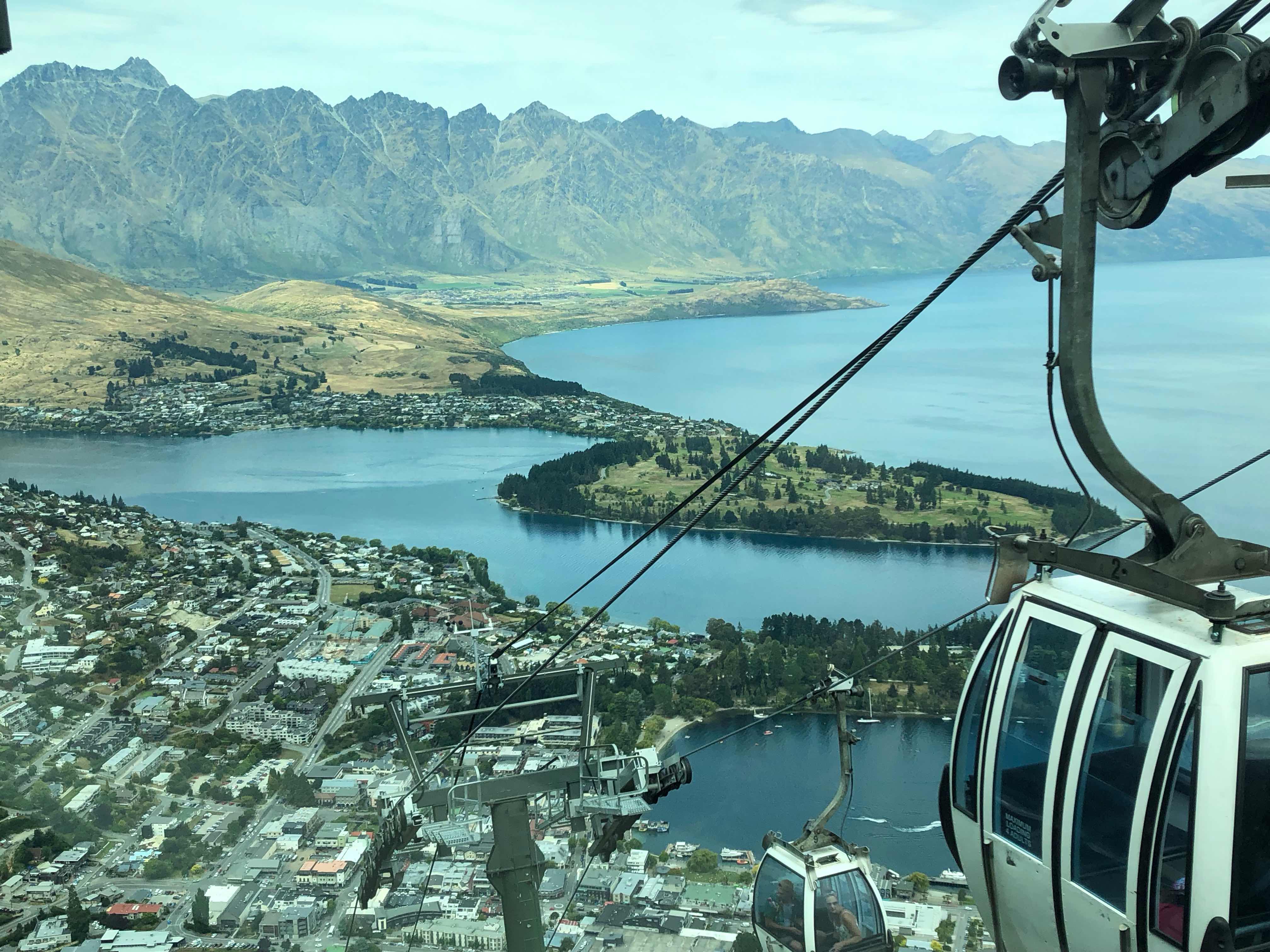 Before we call it a night I promised someone we would have ice cream so we went by Mrs. Fergs gelateria and we grabbed a cone each ... I had a Black Forest ice cream and Kathleen had a chocolate macadamia... mine was better 🍦

Posted by The Travelling Goalie at 10:06 PM