Flying to the South Island 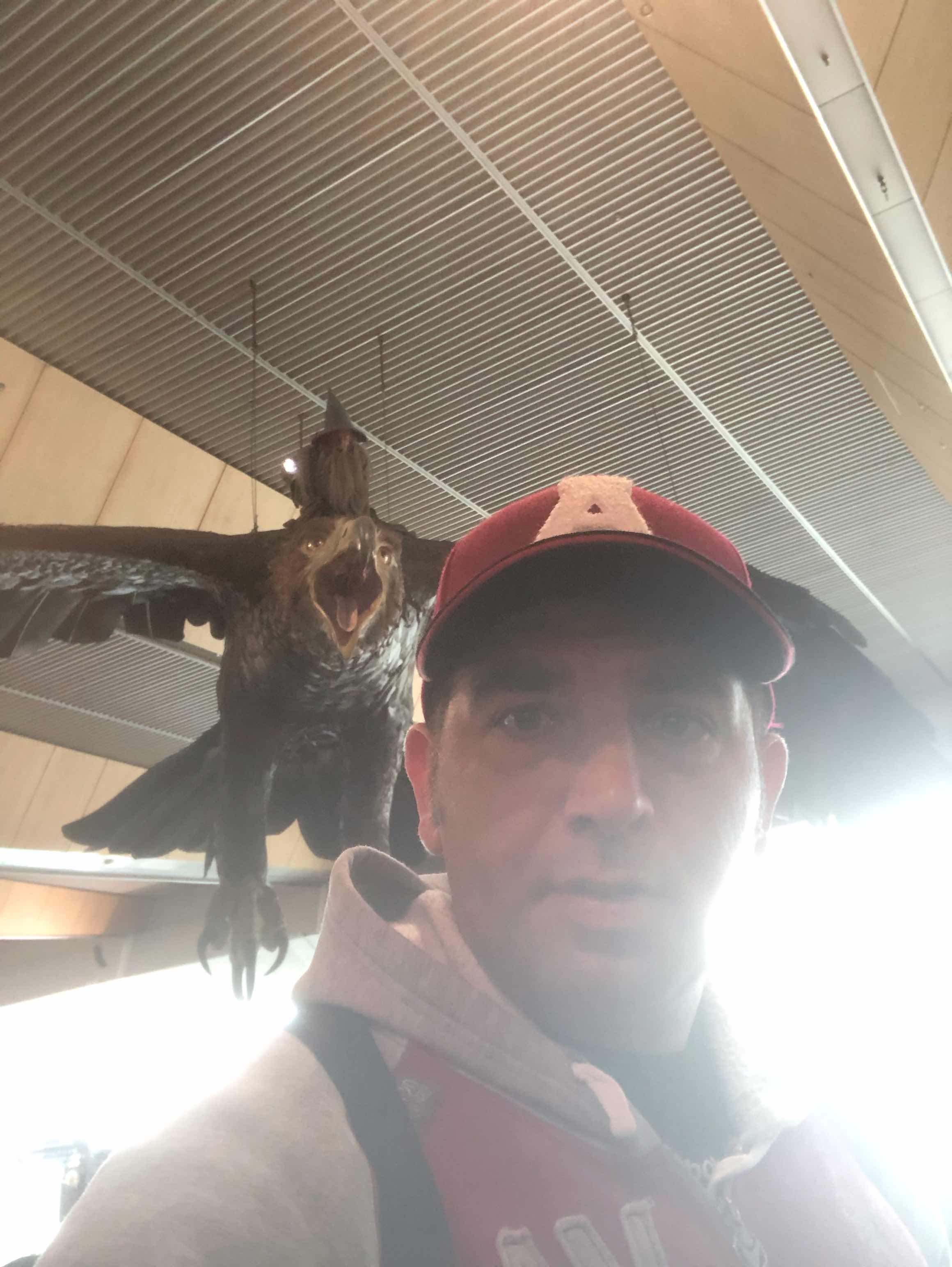 Remember I mentioned that the staff at the Presidents Hotel in Auckland were lazy and kinda useless ? They already sent me on a wild goose chase to Mt. Eden with bad directions , in the three days we were there they also only cleaned my room once and didn’t replenish my soap and on that one day I had to personally go and ask for the cleaning even though we had the sign on our door .... well if you remember that you remember that we booked a shuttle that the concierge wanted to book later also ! When I booked that we mentioned my bags and they said there would be no problems so why am I standing out front of the hotel arguing with the shuttle bus driver over my luggage ? You guessed it , there is an additional charge for my bags 😮 the minute those words came out of his mouth I said hold up the hotel said there was no additional charge and he said he needs room for the other people he is picking up . It’s an extra $5 , now it’s not that this is gonna break the bank . It’s the principle of the whole transaction ! I put my bag into his trailer and we drove off and I grumbled about it the whole way until we got to the airport and I knew full well that my bags didn’t impede his business so when I got out I asked him if he wanted the $5 and I think he realized he was in the wrong and he said if you want to so I gave him $5 in change 🤑 I wanted to tell him to give me a receipt or to stick it up his ass but I kept my shit together and put a fake smile on and off I went to deal with the self service kiosks at the airport . 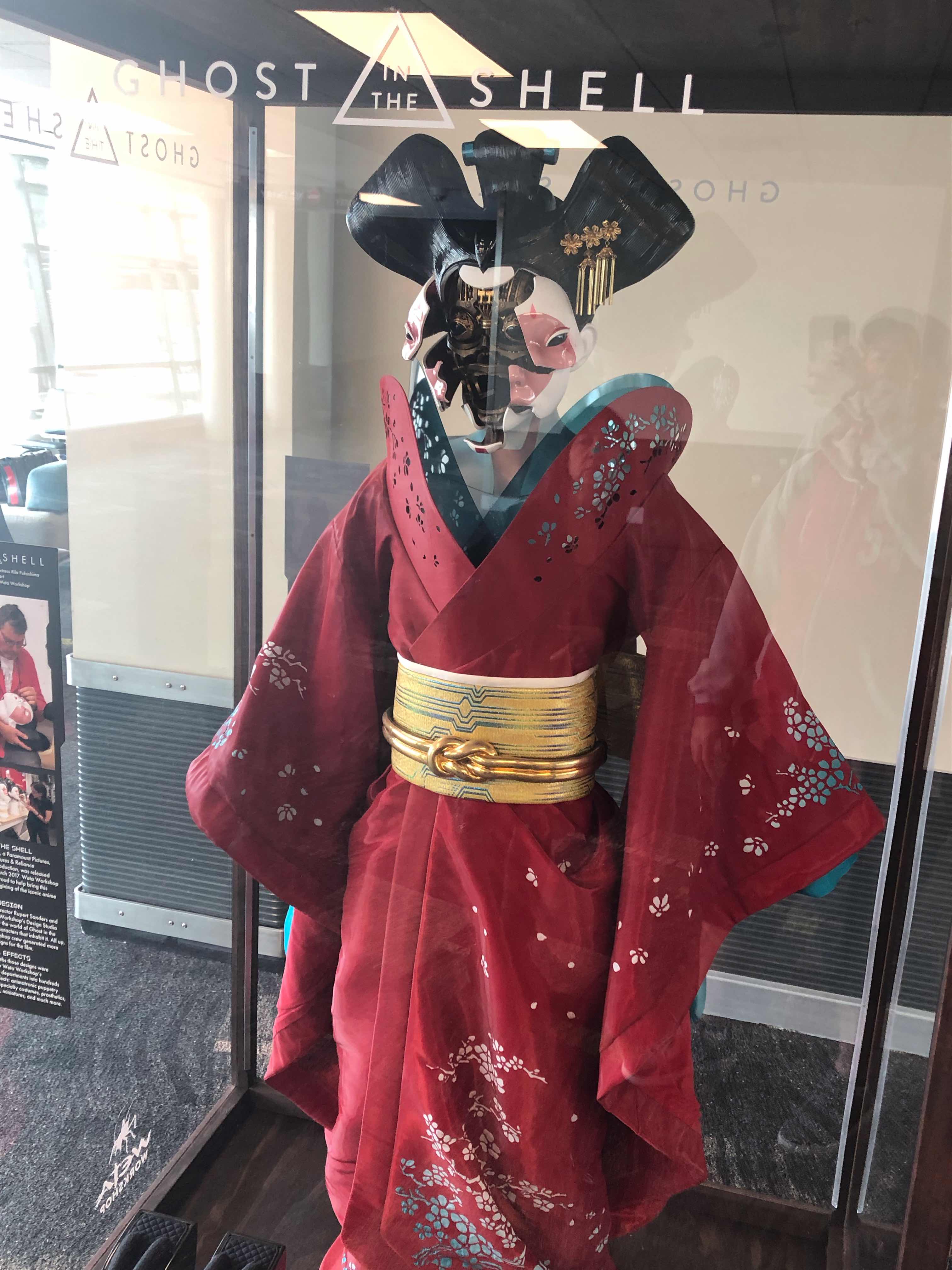 First flight is to Wellington and that was pretty standard and just enough time to watch an episode of The Flash on my new iPad that I loaded with Netflix stuff to watch on these flights with no on-board entertainment . When we arrived we had 4 hours to kill so we wandered around looking at art and set pieces like the ones seen above from Ghost in the Shell and we grabbed a bite to eat . Food is not cheap so I opted for what I thought would be cheapest and grabbed a Subway sandwich which I really like regardless as it’s my go to when I’m working .... better then grabbing something greasy for a day of flying around . After eating we found a coffee shop and grabbed a coffee and sat in a corner watching more episodes on my iPad to kill time before we had to go through security again to board our next flight . When we arrived we left the area to board flights accidentally and probably would have done it regardless since there was nowhere to eat in there anyways . It wasn’t a big deal and was really quick and easy . 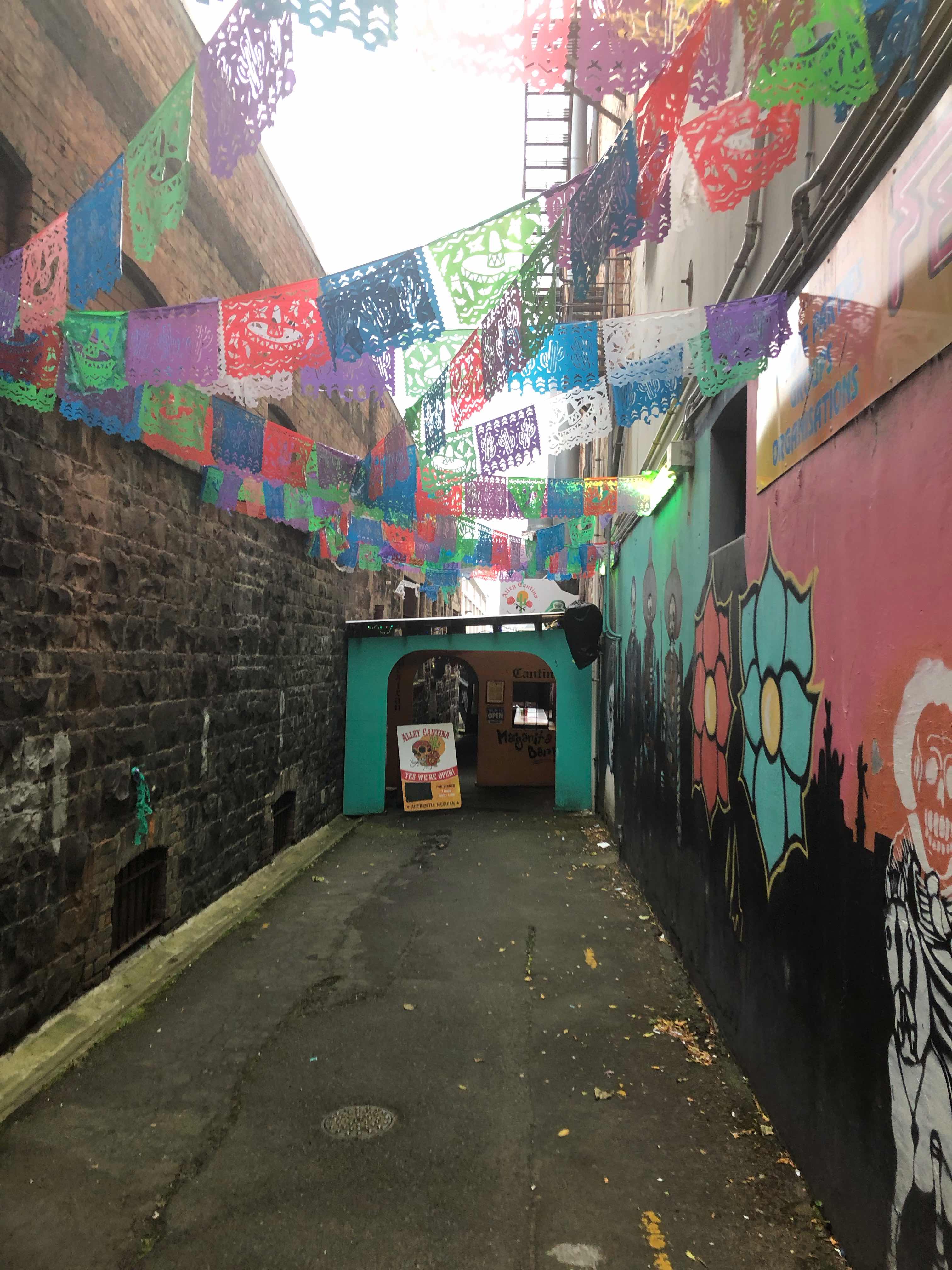 Next flight leaves and I smell something funny ... it’s almost bad enough to make me gag and I look at Kathleen wondering if she farted or something and then realize it’s someone’s dragon breath from behind me . OMG it smelled like a dog ate shit and puked it up 🤮, it was an older woman with what I would guess is her grand son or something , it was bad and I hope she takes care of those rotten teeth in the future . When we get off the flight in Dunedin we gather our bags and I see them and I could tell the grand son was looking at people to reaffirm the stank . He had that look on his face that said “do you smell that “ ? We went to pick up our rental car from Avis after buying some fresh fruit in the lobby of the airport and they were at the next counter and I could see the fella behind the desk dealing with her ducking the dragon flames 🔥 hahaha ! We got our car which is this small Toyota that I immediately dislike as it’s too small for me but it serves its purpose and gets us to our hotel which is The Victoria Hotel where for some reason we have been upgraded to a bigger room 🤗 sweet!!!! Went up to our room and I would say this one is better then the last hotel but still not as good as the room in Rotorua so I would put it 2nd out of the 6 we’ve been in so far . I contact my hockey contact Drew McMillan to let him know we are in town and he gives us a few suggestions and tells us he will meet us later on for a beer . 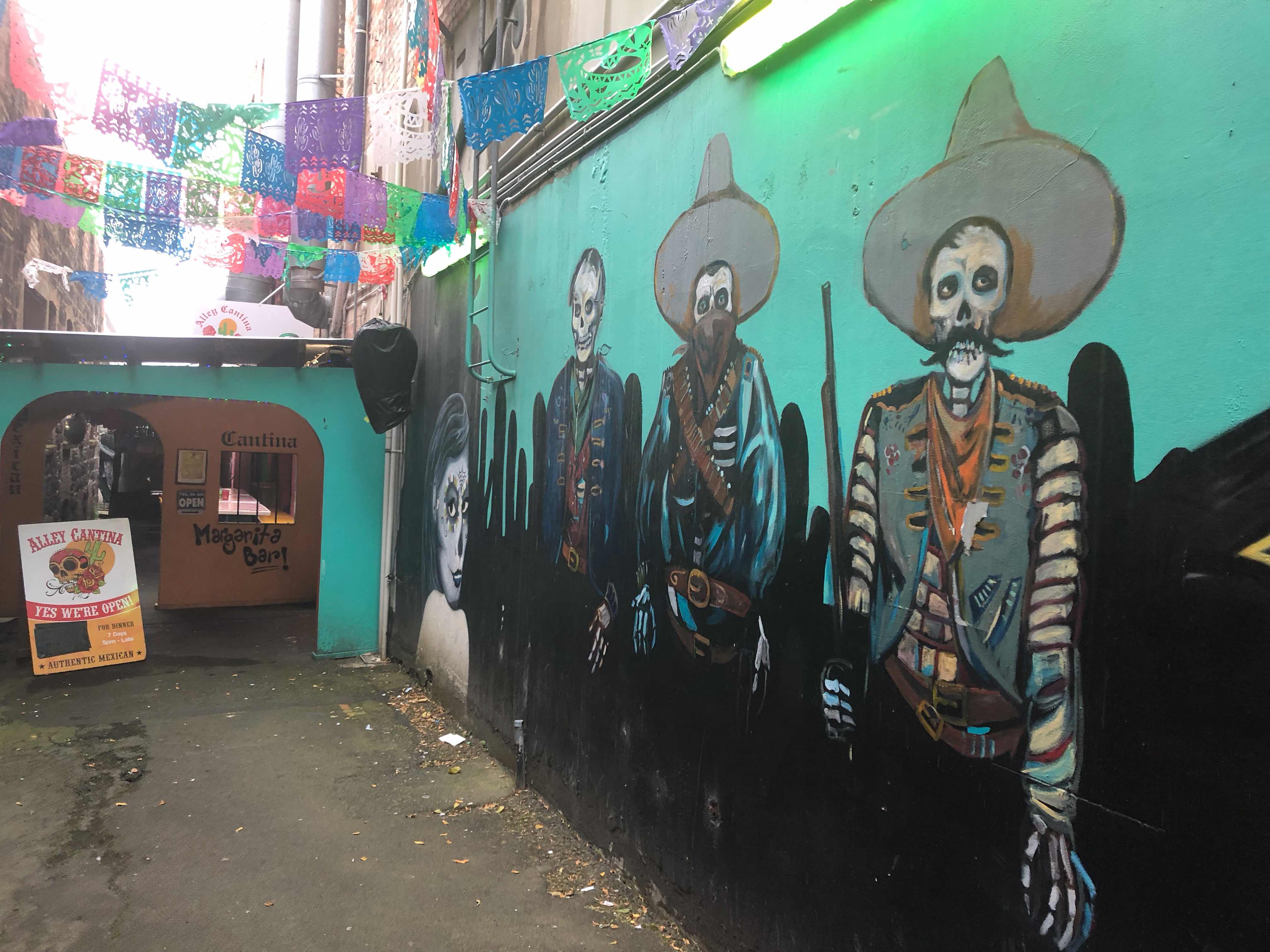 The suggestion that jumped out was to go to a Mexican restaurant called Alley Cantina Dunedin which was fantastic ! It is really close as everything is when you’re staying close to the octagon in Dunedin . Duds as they call it is a university city that is quiet when school is not on so it was great for wandering but first we fill our bellies with some fajitas and enchiladas . The owner of the restaurant is a nice older gentleman who to me had a voice like Michael Cain and he was happy to greet us and tell us about his establishment which once was a cougar bar and was also a sports bar and has had many changes over the 25 years he’s owned the building . The whole restaurant is fully decorated with some cool art and a lot of Mexican trinkets and I would highly suggest it if you’re ever there but don’t tempt them to give you hot sauce . I asked for some and I think my ass is still burning from it hahaha ! They don’t mess around . We were stuffed after that meal ! So worth it ... but we need to kill some time and no time better to do some wandering and burn some calories . There are tons of art shops and beautiful architecture here but as I mentioned it’s very quiet . I couldn’t put my thumb on it but when we met Drew he filled us in on the university thing . 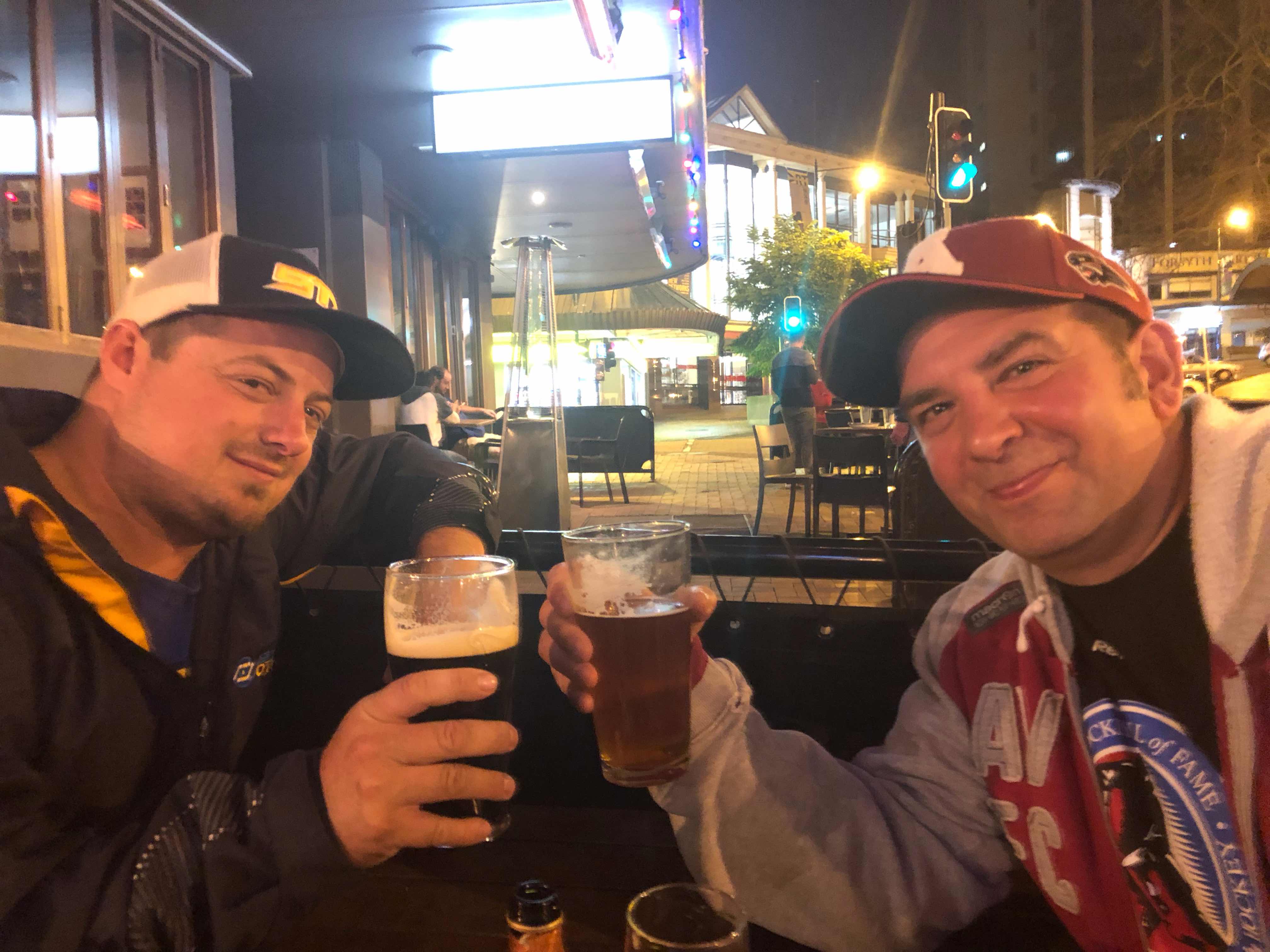 Drew mentioned to meet at one of two bars , either Ratbags or The Craic so we went to Ratbags and I grabbed an IPA and we sat and waited for Drew who showed up soon after with a T-shirt and hat in hand for me from his local organization DIHL which stands for Dunedin Ice Hockey League and he begins to explain to me about the amount of time he puts into hockey here and the good and bad situations he encounters here . It’s always a struggle everywhere but along the way we started to get on well and the beers started going down smoother and Kathleen started to give me the stink eye . She needs to understand that this is The Travelling Goalie doing what he does best and that’s schmoozing 🤫 maybe I shoulda said playing goal is my best attribute ? Whatever you get the jist of it all . Ratbags closes and we move onto the Craic which obviously is an Irish bar .... what was the clue ? Grabbed another IPA sat on the patio and we rambled on about hockey and I have no doubt Kathleen was bored out of her tree so I decided to torture her a bit and grab another pint to chug 😈 yes I am so that guy lol ! Before I left I found out Drew is an Avalanche fan and the Leafs are playing them the next day . I didn’t realize they were playing until we left the bar and not until after Drew left his keys in his vehicle still in the ignition with the doors unlocked and inviting for a joyride . That was hilarious ! 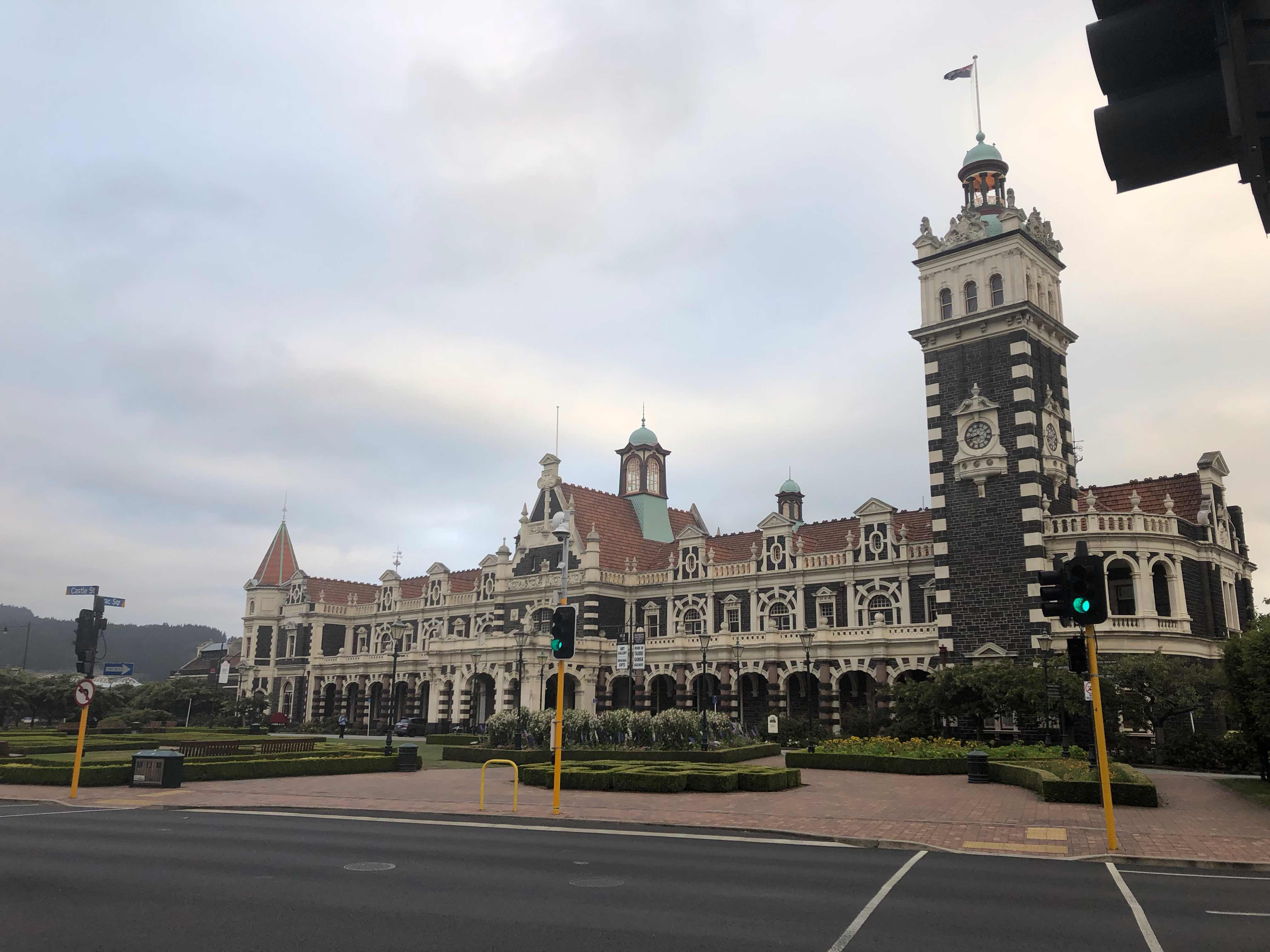 It’s around midnight and Kathleen is not happy with me so I better go to bed and make it up to her tomorrow as most of us men do ... always fixing our own mistakes . We really do bring it onto ourselves don’t we but before I crash I made one last mistake ... I bet with Drew that the Leafs would win . If he wins I owe him some Jaegermeister shots on Saturday when we go to Gore and if I win I rather drink scotch . Go Leafs Go !


Posted by The Travelling Goalie at 1:06 PM