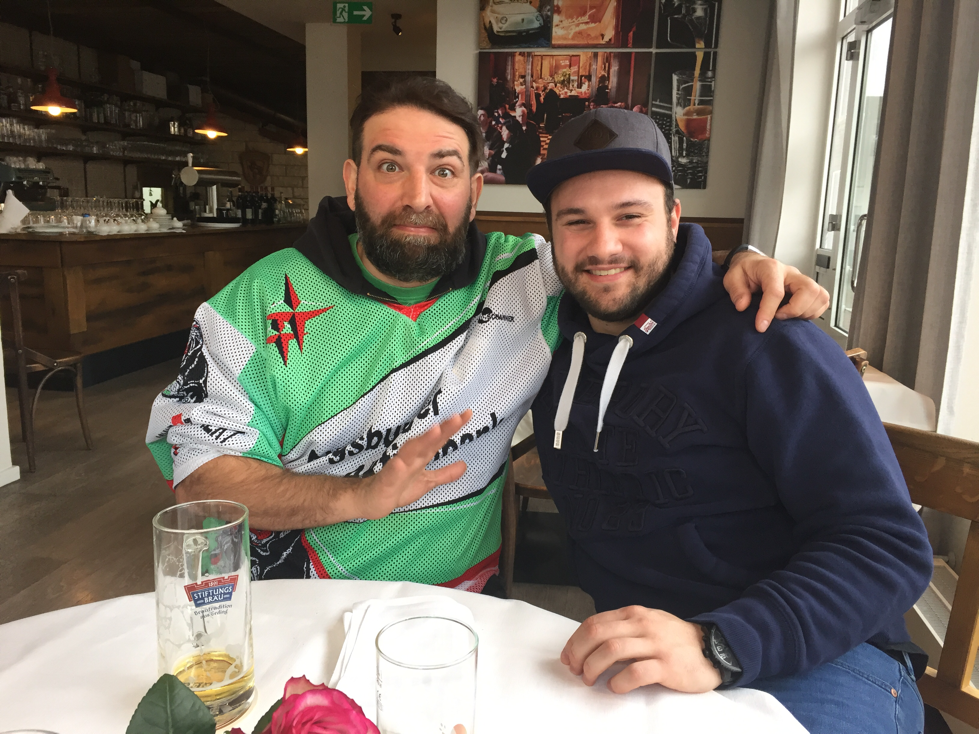 This morning I had a tough time getting out of bed ... stayed up until 5 am and woke up at noon . We were supposed to meet Michael Wolfe aka Wolfey in Augsburg for lunch around 12:30 and that got pushed to 1:30 and that didn’t happen either . I wasn’t really hungover , more tired then anything . Yeah poor me eh hahaha ! I haven’t had more then 5 minutes to chill since I left Toronto and have been constantly on the go since I arrived in Germany . Don’t get me wrong , I’m having the time of my life but at some point I will hit the wall and I think that is today (now) . So wiped out .... eventually we got our ass’ in gear and we jumped in the car and got from Fussen to Augsburg in less then 45 minutes  mostly because we were going around 180 km on the autobahn :) yeah that’s always fun ! We drove directly to Timo’s flat where Wolfey was waiting for us and we jumped into his car and went for pizza . Can’t rememeber the name of the joint but I’ve been there before when I was here last time which is around 4 years ago . Pizza was great and it was great hanging out with Wolfey but he had to jet to go watch his team play in another city and we had to get going to Curt Franzel Stadion which is the home of my favourite DEL club ... the Augsburger Panthers !!! DEL is the top German league and is full of North American hockey players . The level is quite good and very entertaining but unfortunately it’s hard for me to watch games from home because of the time difference and the fact that I have to find dodgy streams to watch them play ... regardless I do keep track of how they are doing and this year they are not doing so well :( 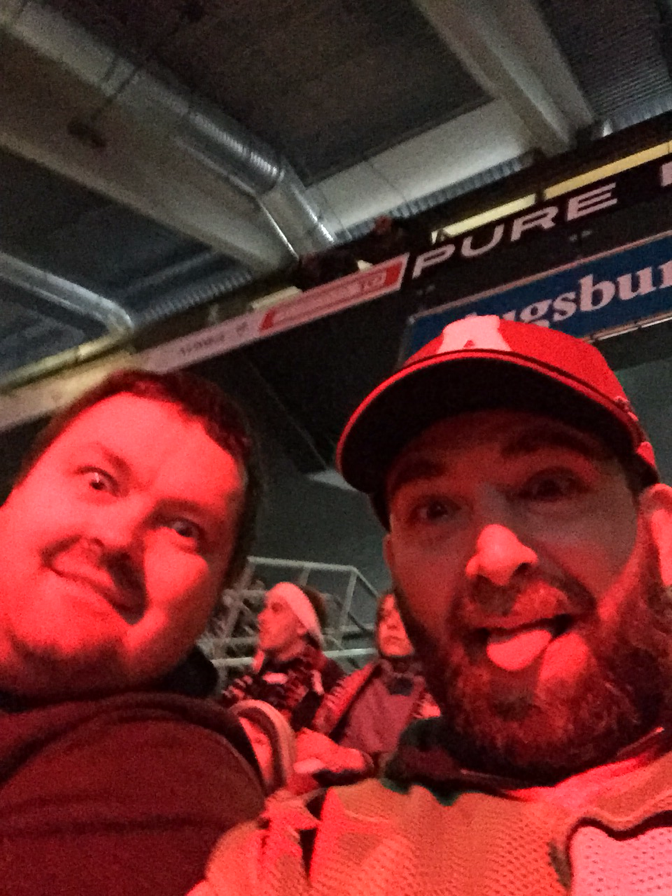 Today they are playing the Straubing Tigers and they are the last place team . The season is winding down so this is a must win for Augsburg . When we got to the rink I went to the fan shop to buy myself a new hat . I almost forgot to mention that two of Timo’s buddies joined us at the pizza place and we took the transit together .... unfortunately I totally forgot their names and we didn’t see them again after the game but if you guys are reading this , it was nice meeting you both . So yeah we are at the rink , I bought my hat and we were now grabbing a couple beers before getting to our seats . We were sitting near the away supporters and they were all having a good time . 45 seconds into the game Augsburg scored ... kinda flukey goal off a rebound it was batted out of the air and off the goalie while he was repositioning . Not the goalies fault . Soon after Straubing ties it up :( the pace made me believe that I would probably see a fight as a few players clearly were not getting along . 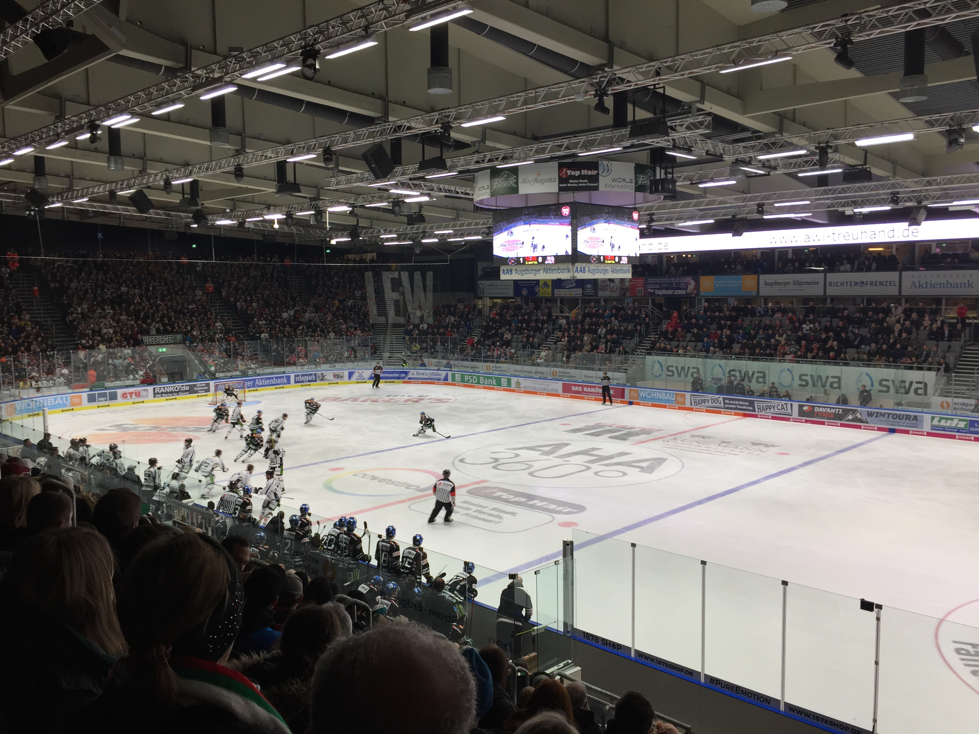 Second period was absolutely boring . Had more fun hearing the kids behind me swearing in German and I caught myself dancing to the beat of the other teams drums which I thought I shouldn’t have been doing since they are cheering for Straubing so I stopped myself and next thing you know the second period was over . Two beers in , time for a whiz :) then we grabbed this pork sandwich which was really really good and another beer 🍻. I’m not planning to get drunk but it’s honestly hard to say no to a yummy pint of good lager .... yeah I’m not drinking IPA’s here as it’s not really a thing here . Third period started and we went up 2-1 and then one of the Augsburg defencemen accidentally swatted the puck into our own net to tie the game up and minutes later another bad defensive play lead to another lucky goal putting Straubing up 3-2 . Not looking good . Losing this game will definitely destroy any chances of a playoff spot . It’s too bad they didn’t come back but the last play of the game was a good one but luck wasn’t on our side and we lost .... seasons over if you ask me :( 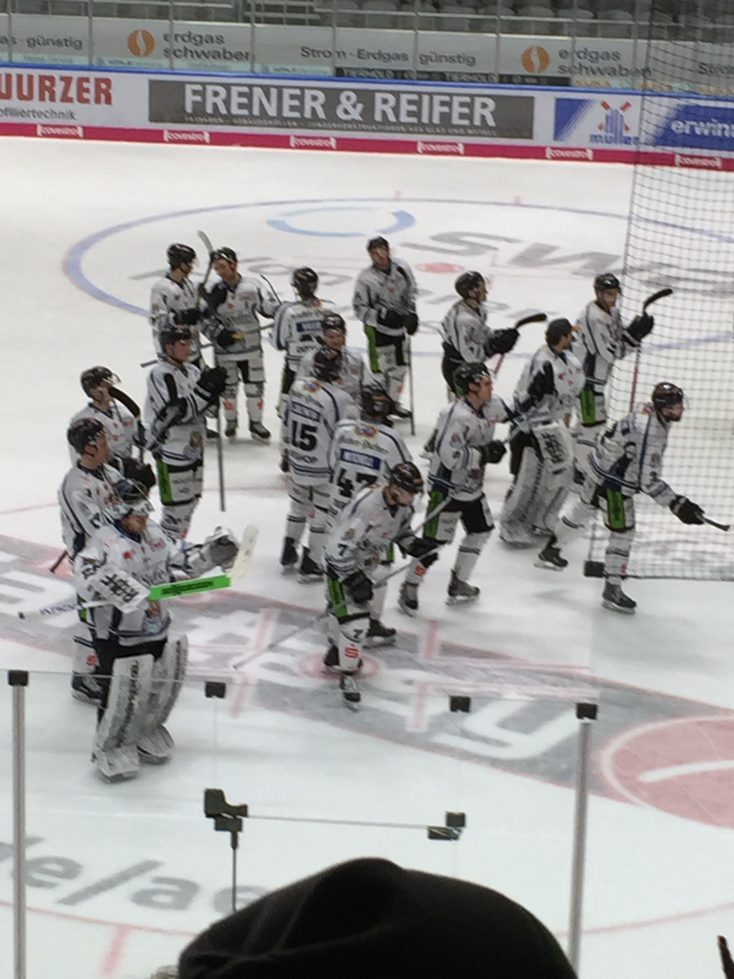 After the game we sat around waiting for the crowd to thin out then we started walking and went by the outdoor rink beside the stadium . Really nice ice which was very well lit and the glass on the boards looked brand spanking new . I wanna play on this ice next time I’m here !!!! Timo will sort it out :) I’m sure of it ! We thought about going by the brewery but we are both wiped out so we decided to head back to Timo’s place . Time to do some laundry and repack my bags .... have to be up at 6 am to catch my flight to India 🇮🇳 can’t wait ! Usually I write my blog posts the day after but tomorrow I probably won’t have any time to do any writing so this is in real time . Its around 9:30 pm and I should probably close my eyes in the next half hour . Just waiting for my laundry to be done and I can hang dry my stuff overnight near the heater .

Today was a good day and this whole weekend being here in Germany has been fantastic . Thanks to everyone involved over these days ! Hope to see you all again . Cheers 🍻
Posted by The Travelling Goalie at 3:49 PM