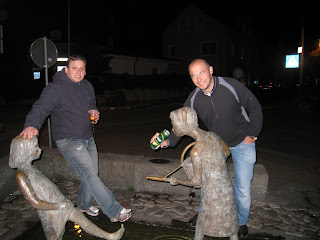 Rainer chewed up his knuckles last night trying to wake me up , but Dominic had no problems waking me up . He said the magic words, " we are on the ice in 10 minutes " Thank God we are parked in the parking lot of the arena! So i drag my drunken ass inside and get the round of applause on arrival ( LOL !) .2 games today with our first match vs. Dortrecht Lions ( Holland ) good thing they were a weaker team then we were , we outplayed them and won 6-2. Don't ask about highlights , i have no recollection of this game .
After the game we had a long break and i was feeling the effects of the night before . I was offered a beer , took it, had a sip ....then went to barf in the shower . Getting sick after a night of hard drinking usually means i am making room for more , this was not the case . So off to McDonalds to grease up . Still did not work , guess i am not drinking tonight . With a 2-2 record and a game against the Russians i decide to stick to cola . Yeah the bartender laughed at my request . Drinking beer was not an option.
So our second game of the day was vs. St. Petersburg Medvedvi ( Russia ) . These guys were undefeated and had already beaten the 2 teams we had lost to . It was a really close game and we had our chances, they were just the better team . We lost 3-1 but i was happy to say they did not kill us . I felt as though we gained a little respect . Going into our last game tomorrow vs. HC Sittertal ( Switzerland) we had a chance to take 4th place , hopefully this D of our does not show, he got hurt during this game and we played a million times better without him . 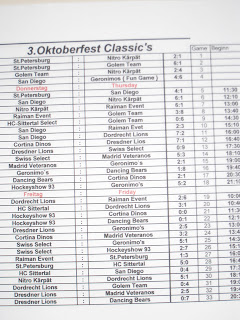 After the game there was a party taking place in the city centre , which i went to but was constantly being offered drinks . I was really biting my lip saying no repetitively , and watched everyone get drunk ! Being the only sober person there and after bothering Rainer numerous times to head back to the camper with me , i decided to leave on my own . Rainer kept saying he was going to just finish that drink and basically at one point i saw him ordering his infamous Jaeger shots and decided not to bother him anymore. So i go off on my own not really knowing which direction to walk and being a little leary of getting into trouble . I arrive at the camper without the keys and then begin to devise a way to get in on my own . I find a loose window and begin to pry it open , find some cases of empty beer and build my stepladder only to find out i can't fit my fat ass through the window....oh shit a car is coming ! Hoping it is not the police i hide behind the camper only to find that it is Rainer LOL ....he lets me in , borrows some cab fare and my day is now over ! 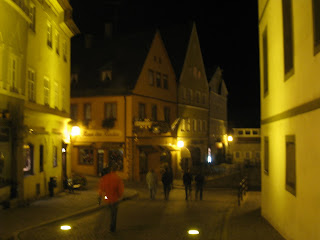 Posted by The Travelling Goalie at 1:59 PM