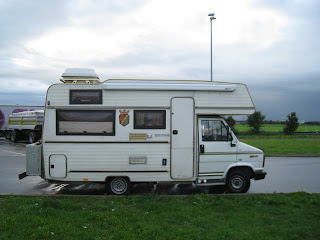 Time to pack the camper! Rainers mother was kind enough to do my laundry and it was dry and ready to pack ....backpack packed ,placed into camper! It is now that i realize how much alcohol we are taking with us , let the party begin ! 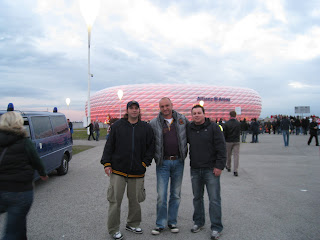 So off to Bayern Munich Champions League match vs. AS Roma . We have to meet Wolfgang Klose and his daughter Julia , to make things easier Wolfgang and Julia meet us somewhere on the outskirts of Munich. Parking the camper in a mall parking lot we get into Wolfgangs vehicle and off to the game . 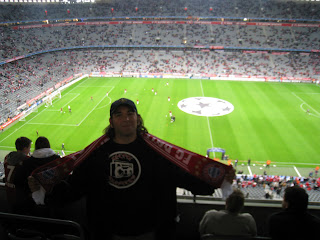 68,000 people all packing into the Allianz Arena ! We stop for a beer and some sausage, continuing into the stadium we decide more beer would be necessary so we purchase these cards in the arena , money is not exchanged at the booths inside so i put 20 Euros onto this card and go to purchase some bevvy's :) to my dismay alcohol is not sold in the stadium :( ....at least i got my scarf .
I was planning to meet my friend Nate at the game, he was supposed to call Rainers cell, apparently he called a good 15 times but from someone elses mobile so Rainer was not answering .At halftime we were wondering if he was even there, and then the phone rang...it was Nate ! I ran down a level to go meet him , big smiles as Nate is someone i really wanted to see . He was my host on my last trip to Europe and i thought it would be rude to not see him , good seeing you bud ! 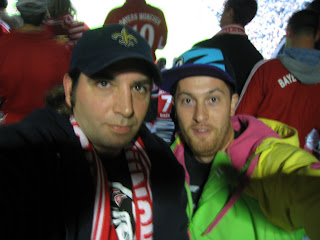 Got back to my seat just in time to see Bayern score the first goal ! The stadium errupted , what an experience . I took plenty of video and pics , out of all the video i have taken so far the video i have of Klose scoring Bayerns second goal tops them all by far . Bayern wins the game 2-0 and we leave the stadium looking for somewhere to get my money back , 20 Euros dwindled to 12 and change ( Cola is about 4 euros each ) found out the hard way i guess :(
Back to our camper ,we say our boodyes to Wolfgang and Julia ( hope to see you bother some day soon ) . We had to gas up and start our 2.5 hour trek to Fussen for the tourney that starts the day after . Both of us were really tired so we stop at a truck rest stop to sleep . This is the first time i have ever had to sleep on the side of a highway . good night .....
Posted by The Travelling Goalie at 12:24 PM