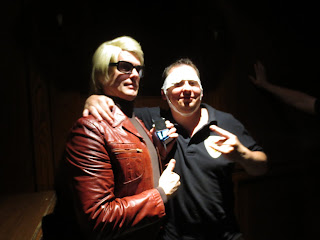 This past weekend the Ghetto Classic Tournament tore through the streets of downtown Toronto . We had teams visit us from Germany, Slovakia and Boston ( the southies :) ... it didn't really matter who won or lost the title as everyone won in the end . Beer was flowing out of that arena and people were smiling all weekend ... i was a bit stressed trying to please the 10 teams that were there but it was totally worth it . The highlight of the weekend for me was when Jokers team owner and former German superstar HEINO! made his appearance . The Germans loved it ! He made his short appearance at The Rhino where we went to watch the Stanley Cup Finals . 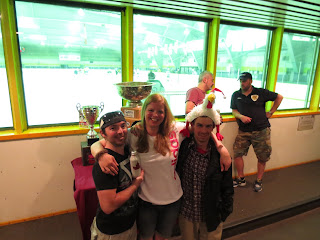 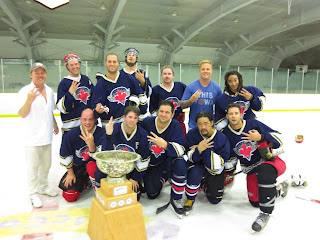 Not sure how i am going to top this years tourney next year , at best i will be lucky if these teams all return as it was a great honor having them all participate . Another weekend of great hockey with absolutely no bullshit , people all got along on and off the ice with no fights and no incidents ... and i am pretty sure there were no injuries which is absolutely amazing . Based on the feedback i am receiving already it looks like everyone enjoyed themselves and i would not be surprised if our next edition of the Ghetto Classic will be packed full of surprises but this one will never be forgotten as it was the first time Rainer my brother from another mother was here .
He brought the 3 teams from Europe and has already told me he would love to come back with more teams  . Thank you Rainer , i think pretty much all my friends had a few laughs with you this past weekend , you were possibly the most interesting person to drink with at the rink LOL !

Our CHAMPIONS this year were no surprise as they were both defending their titles ... Easy Company and Hack HC both went undefeated on their way to the titles , both playing in nail biter finals against 2 great clubs that both wanted the titles . Every year the competition gets tougher , and i am sure it will be tougher next year too . If you or your team is interested in joining us next year please contact me , spots are very limited as it is only a 10 team tournament but if you plan on travelling alone to Toronto i always have teams interested in adding skaters . It is hard to say no to a tournament with free food and beer :) 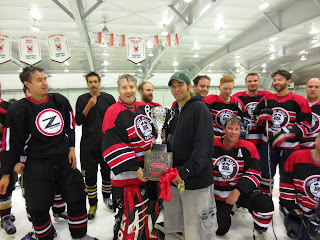 Before i end this post i have to thank all the team reps , referees, arena staff , sponsors and even people that decided to man/woman the BBQ in the rain on Saturday . You guys all rock and i hope to see more of you all before our next tournament , it was great raising a pint with each and every one of you .... now i am going to go nurse my hangover and get packing for my trip to South America :)

PROST !
Posted by The Travelling Goalie at 8:49 AM