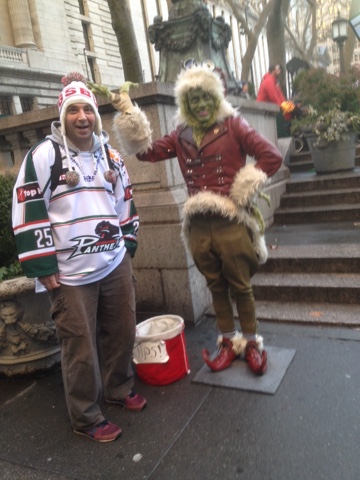 What's this ? I woke up yesterday and didn't have a hangover ? Strange isn't it . I didn't go on a rager the night before and I'm travelling ... Doesn't seem like me does it hahaha ! I'm on good behaviour this time since I'm travelling with Kathleen :) so first thing I did was to get a couple coffees from the Dunkin Doughnuts down the road . This stuff is awful .... Both of us agreed . After drinking our sludge we washed up and went to George's for breakfast . Standard breakfast was had (bacon & eggs) then we went to the closest tourist shop and bought some things . I bought Kathleen a selfie stick for a Christmas gift which I did in full stealth mode then we headed to Starbucks for another coffee before we really started our day . 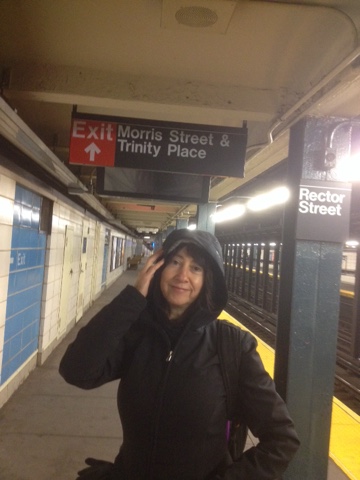 We went to catch a train at Rector St and headed up to Central Park to go skating . It was raining in the morning but the website said the rink was opened ..... When we got there it was closed ? Wtf ! I was not a happy camper . There are two rinks in Central Park , I played in a tournament on the other rink about 10 years ago . That rink is Lasker Rink and this one we were at yesterday was Wollman Rink , obviously I am going back today to say I skated on both ! 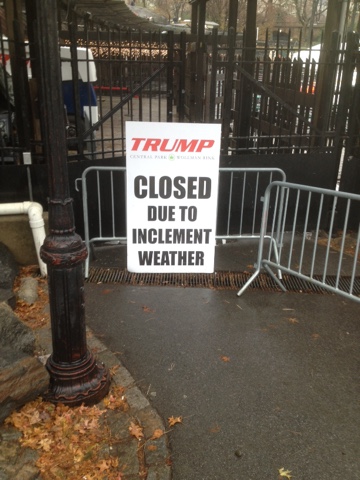 We both have our skates in our bags and I am super determined to go for a skate so we started walking down towards Rockefeller Centre but it was rammed beyond belief ... Damn it ! I'm not giving up , I will skate on a puddle if I have to !!! There is another rink a bit further south in Bryant Park at the Christmas Market . When we arrived there was no lineup but a lot of people watching others skate . Now here is the low down for this rink which is a total scam .... It's free to skate here , you are allowed to bring your own skates and there are rentals if need be so if you don't have your own they make money . Now if you brought your own skates more then likely they are in a backpack of some sort which we both had . I asked the girl at the entrance if I could wear my backpack while skating like I do back home , she said yes . So after I got my skates on I went to jump on the ice and one of the rink guards stopped me saying that I can't bring my bag . I asked him , so where doin leave my bag ? He said in a locker :( so if you bring your own skates they still make money of you ! Does this seem free ? Nope ! So being the ghetto kinda guy I am :) I took Kathleen's bag and put it into mine and checked one bag ..... For $10 !!!! Ok don't get me wrong , I enjoyed getting on the ice but I don't enjoy being swindled with these fake free skate bs . We skated around for almost an hour and had another run in with the rink guard when we were taking photos .... The rink guard said we are not allowed to take photos and I asked him is there anything we are allowed to do here ? He didn't like that but I didn't care . Come
chase me down if you want you ankle burner hahaha ! We did manage to get a few pics though :) 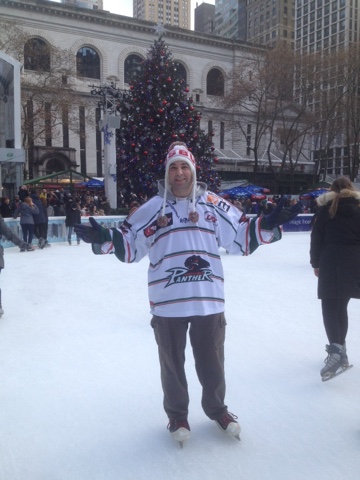 After getting my sweat on we went for a wander to find NHL store which was closed ... But on the way we stumbled upon the HBO store , Kathleen was in Game of Thrones heaven . She loved it , and that made me happy . After that we wandered over to Heartland Brewery for a pint and I had some wings which I might add were really really good . 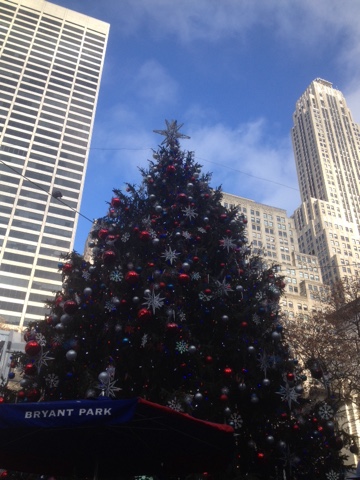 We were a hop and a skip away from Times Square so we went to experience the madness on the way to the next pub I had to hit .... The Flying Puck ! Yes it's a hockey bar dedicated mainly to the New York Rangers , I have been here before . It's a bit of a dive bar but that's what I like . It is Christmas Eve so unfortunately it was about to close but I snuck in a quick pint and we headed back to our hotel to relax for a minute .... 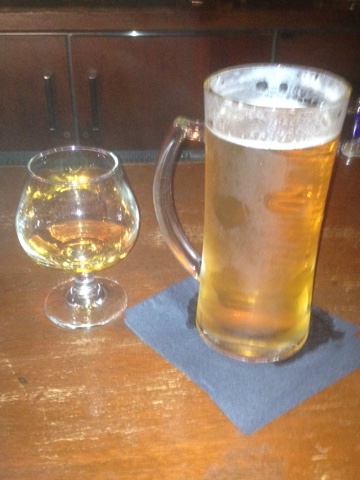 After mulling around in our room for a bit we decided to go hit a bar . We were gonna head to the lower east side but decided to check the hotel boozer which is called St. George Tavern and we met a very friendly Mexican bartender and decided to spend the night at the bar :) I drank a few glasses of scotch with the local IPA and we both got a good buzz . On the way out I went to the convenience store to grab snacks for the room and that was it .... That was my Christmas Eve in NYC .
Merry Christmas to one and all , I hope you all have a great day today . Ho Ho Ho !
Posted by The Travelling Goalie at 9:05 AM