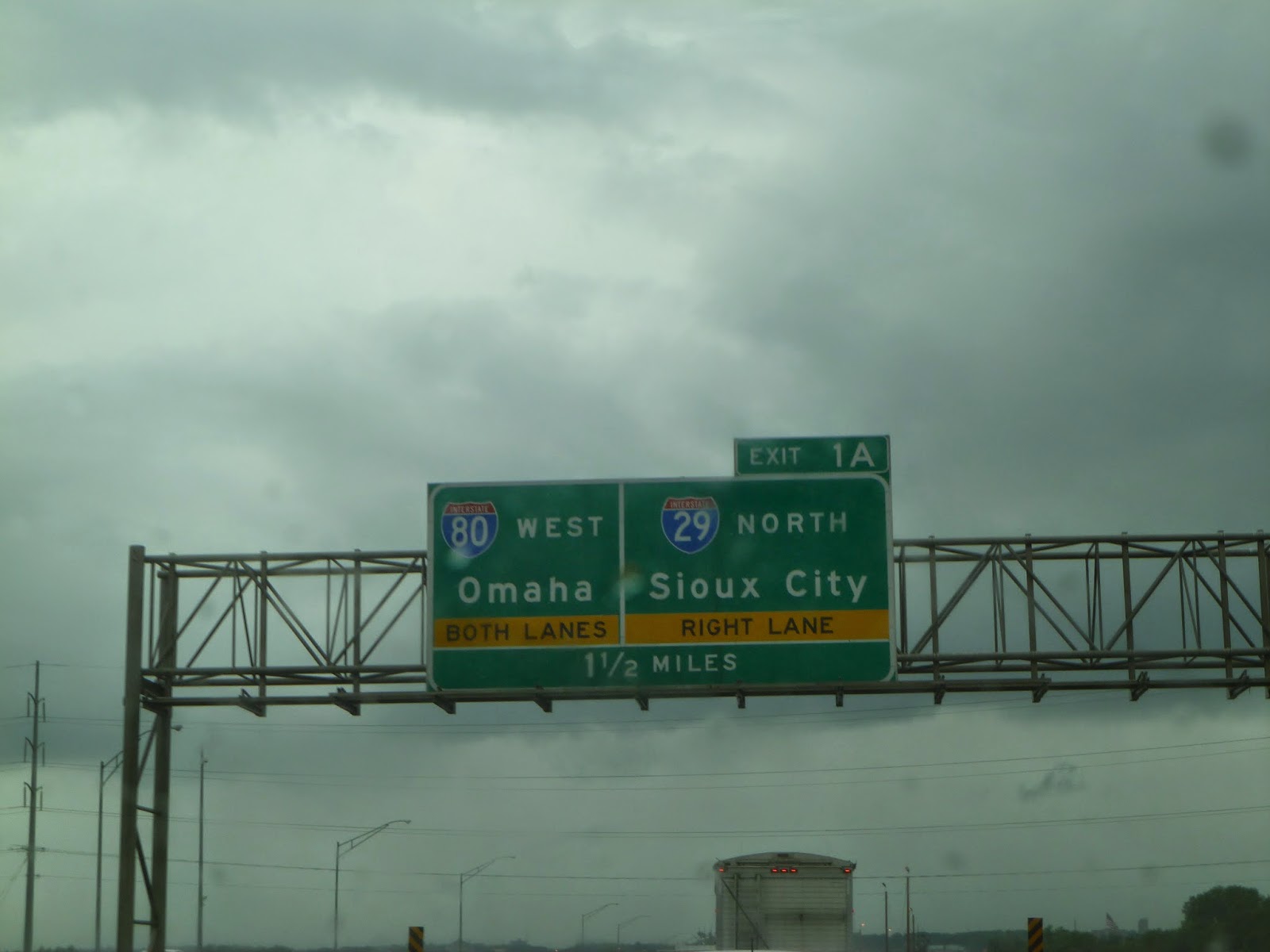 When we took off from Chicago i was low on gas :( had to fight through morning traffic to get out of the city and when i got to the outskirts i was lucky enough to find a gas station ... the attendant was a cross dresser , yes it made for an interesting start to my second day driving ... this wasn't one of those cross dressers that could pass for a woman , the beard wasn't hiding anything LOL ! Anyways we fueled up and got some horrible coffee which i drank anyways . Off to Omaha ! yeah Omaha ... 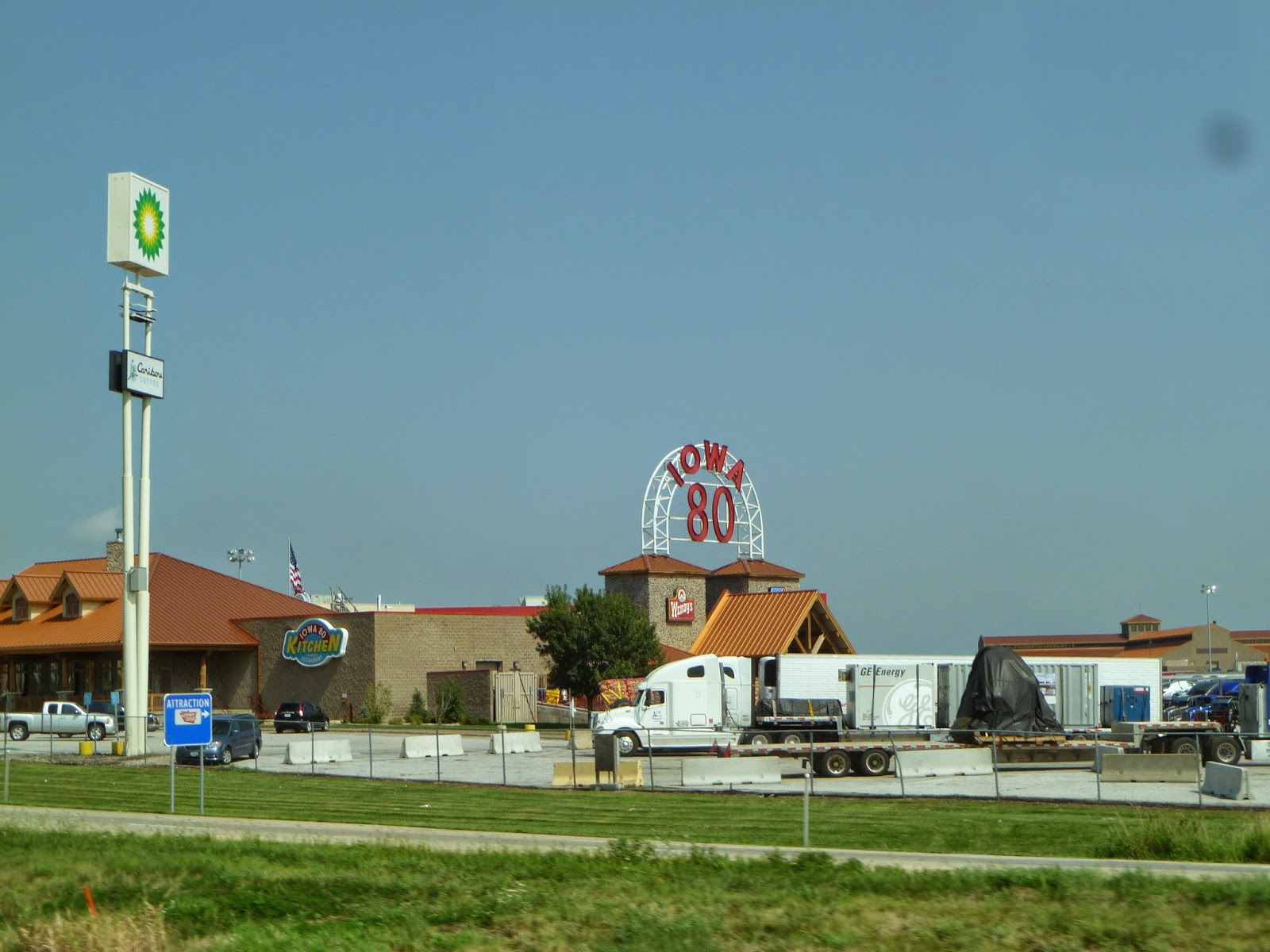 The road there is how can you say less then adventurous , it is basically farmland with nothing in sight . The scenery is quite dull and the ride is tough with speed limits picking up to 70 miles an hour . Driving a U-haul full of furniture and heavy in weight is less then ideal for these speed limits so we putter along our way . The most exciting thing i saw on this portion of my drive was the bugs hitting my windshield ! Yes its that boring ... good thing i have Kathleen with me as i have no clue how i would survive the 9 hour drive without having someone travelling with me . 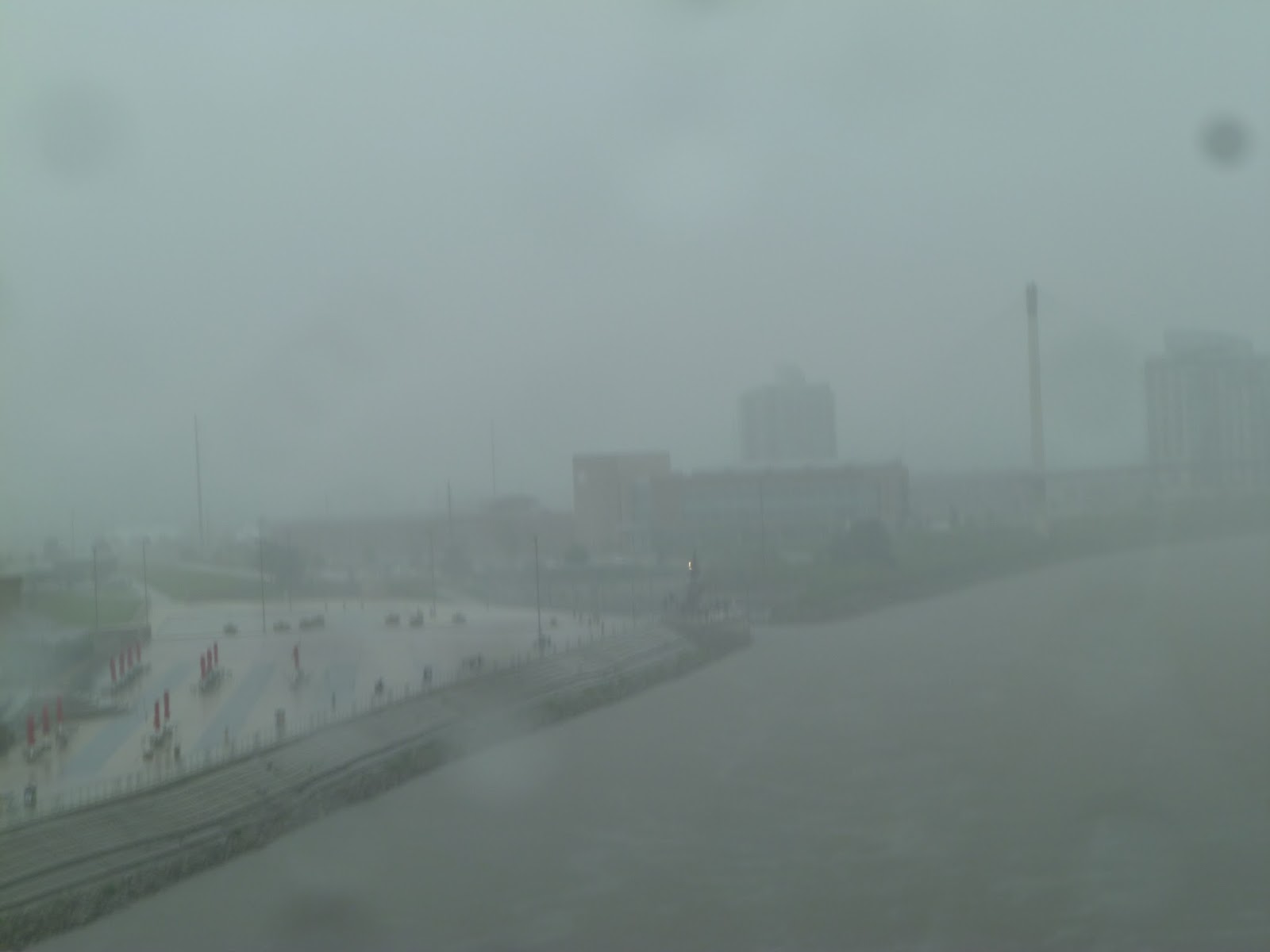 We stopped a couple times for gas and honestly i am not even sure if we fully stopped for lunch this day ... that's how boring it was ! My memory seems to be wiped of this day . What i do know is that when we finally hit Nebraska it started to piss rain . It came down in buckets and i thought we were far away because our GPS doesn't switch time zones automatically so i stopped for McDonald's coffee just outside of Omaha thinking i was further then i actually was LOL . We booked our hotel on the ride through Rocketmiles (gotta love those points!) and we stayed at the Hilton Omaha which is near the convention center and in the heart of the city ??? 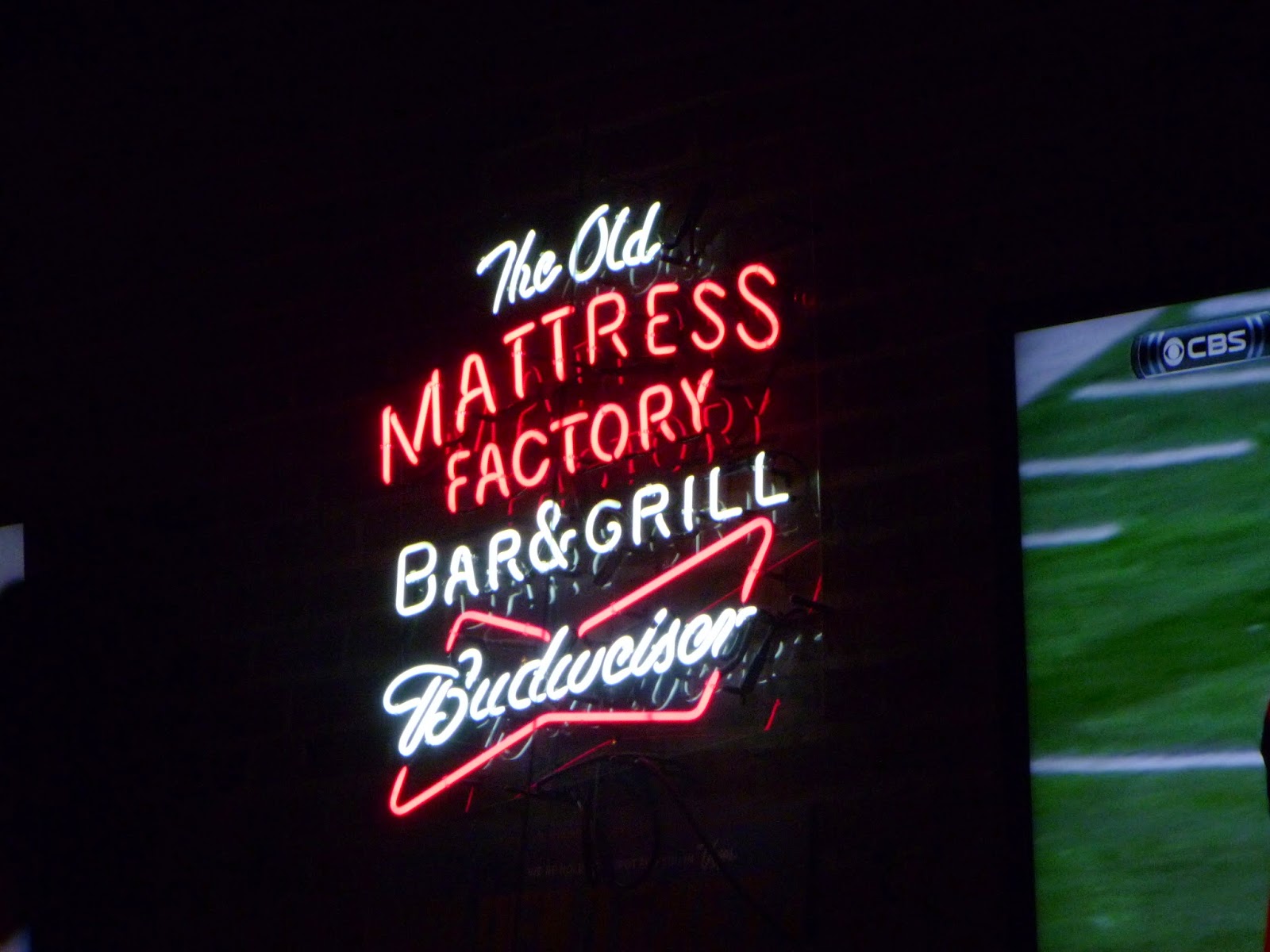 To be fair it was pissing rain but when we pulled into the heart of the city it was like the dead zone , this is one of those cities you don't need street permits to block roads to shoot a zombie flick ...basically a post apocalyptic setting . We kinda figured it would be a quiet city and that is why we booked in at a nice hotel with a bar and restaurant . First things first .... time for a couple beers :) After a couple pints and a bit of decision making between me and my better half we decided to go to The Old Mattress Factory which is just a block away ... hotel staff said its a great restaurant .

We walked over since the rain had stopped and honestly we didn't walk past a single person ... its really dead . When we got to the restaurant there were people there about half full . It has a sports kinda atmosphere with tv's everywhere playing sports like soccer and high school football :P yeah its big there ?!?!?! The food was great , i had a steak and it was delish .Our server was awesome , she made a minor mistake and came over immediately to tell us we will get discounted on our meals but Kathleen already had her eye on her pint glass so she haggled into taking the glass instead and our waitress gladly brought a clean one for her .... now that's service :) If you are in Omaha and want a good place to have a beer and some good eats , i suggest you go to The Old Mattress Factory :) 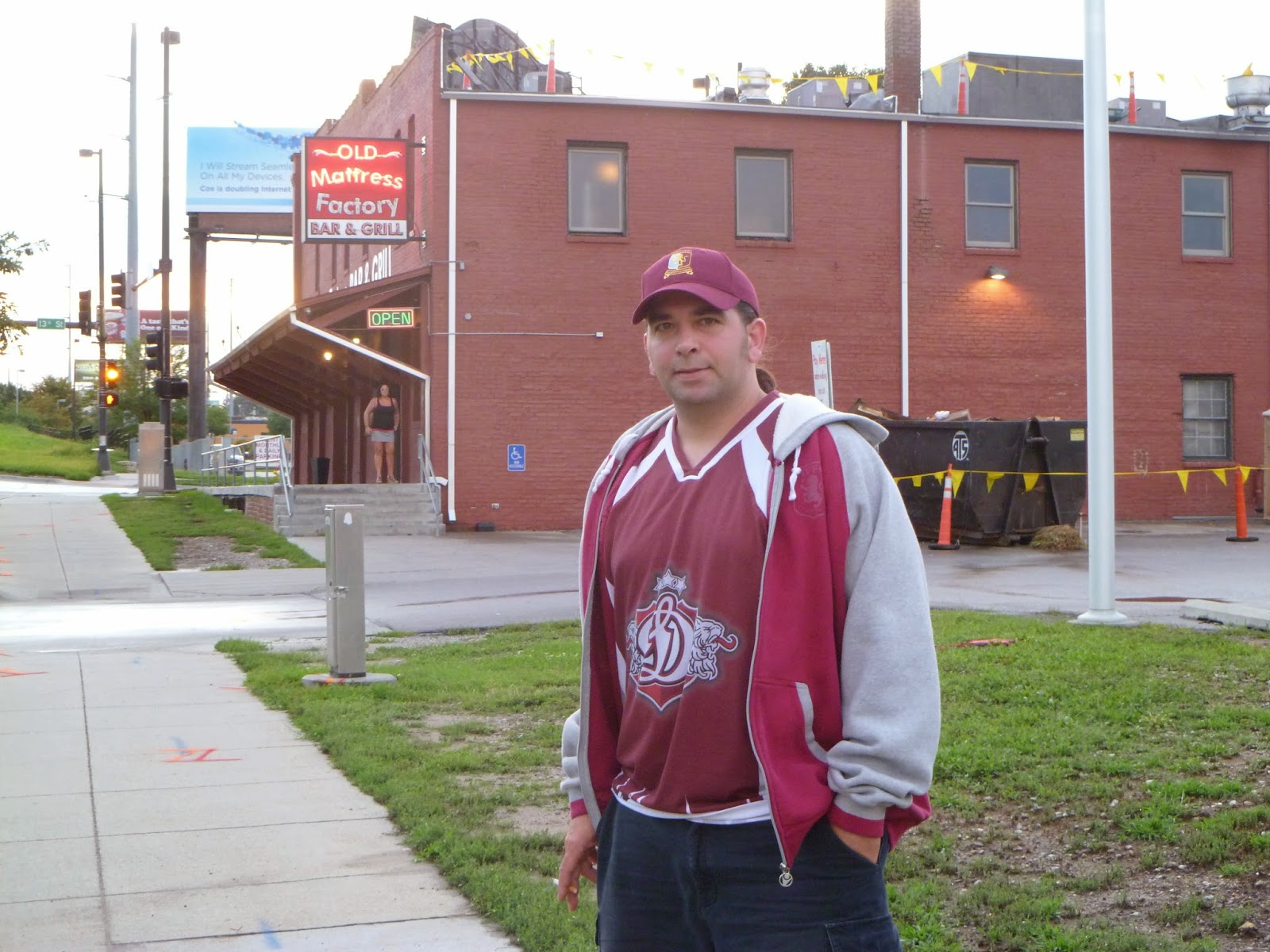 After we ate we basically just headed back to our rooms . On this tough schedule driving and basically stopping for dinner and sleep ... the road here was kinda tough with it being so drab and my comfy bed was calling . Omaha wasn't my favorite city on this trip but it didn't disappoint me . Tomorrow i head to Denver !

Posted by The Travelling Goalie at 7:58 AM