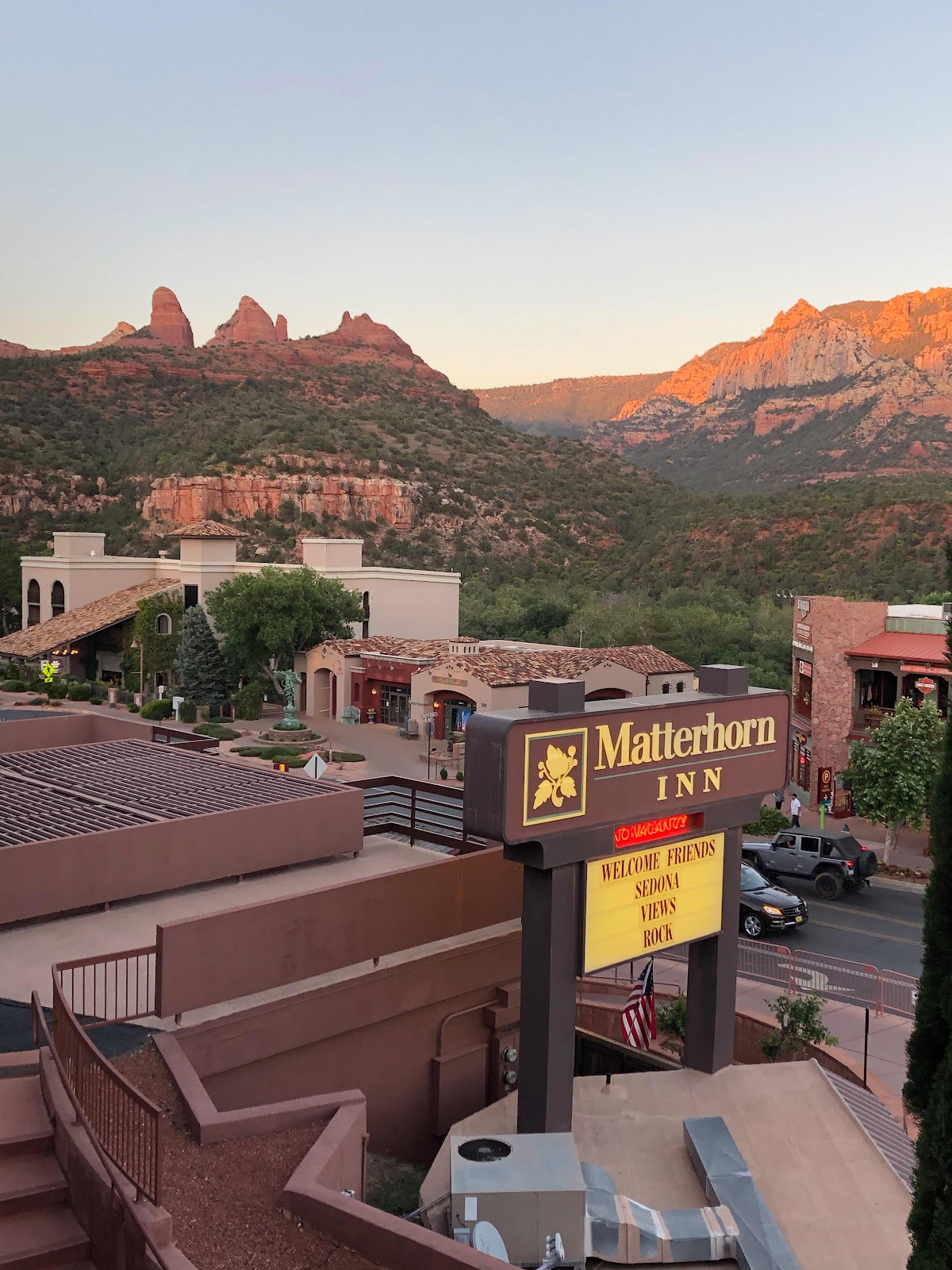 Yesterday was a long day , for me at least as I had to wake up and get ready for my 4 hour drive from Tucson to Sedona which we decided to stop over at on our way to The Grand Canyon . First we need to fuel up and I don’t mean the car ... gimme that coffee ! Can I have a grande flat white please ? The person obliged my request downstairs in the casino at the Starbucks at the ungodly hour we are waking up at 🤨 we both did a last lap of the premises and headed back to our room to pack up and leave . While packing Kathleen showed me two winning tickets she had from the slots and said what are we gonna do with this ? She had two tickets , one was for like 12 cents and the other was for around 65 cents . Basically if you’ve never played the slots I will quickly explain . When you win you can cash out and the machine prints out a ticket which you can take to the cash out booth where you hand in the ticket and the person in the secured booth gives you your winnings OR you can put that ticket into another machine and play your winnings . Ticket goes in same slot where you can also put cash . Cashing these small tickets would be almost as embarrassing as posting a topless picture of yourself posing as an MMA fighter lol 😝. So when she showed me the tickets I said , let’s give one more go on the way out and toss in $5 and leave . Sure ! After cleaning up double checking that we didn’t leave anything in the room and checking out we went to the van and dropped our bags and walked back into the casino with our very small winning tickets and a couple bucks to burn in hand and searched for a lucky machine . Kathleen spotted a slot machine with gorillas 🦍 on it and I looked at her and said let me guess .... you want to play this one because Ellen Degeneres loves gorillas and you love her show ? Kathleen responded with a yes and we sat down and fed the machine . Now I’m not kidding when I say that a few plays in we won !!! As we sat there and the machine was going crazy I was calculating it would cash out to something like $20 and we both decided we should just cash out and hit the road and when we pressed that cash out button the ticket began printing and to our amazement we had won a whopping $81.20 . I know it’s not a million bucks but it sure did cover a bunch of stuff we had paid for in the last few days . Both of us had huge shit eating grins on our faces as we walked out of the casino with our heads held high . We were both extremely happy with our 5 minutes that we spent to win this money on a whim . We jumped into the van and drove straight to the fanciest breakfast joint we could (McDonalds ) and splurged on a pretty gross breakfast hahaha ! I’m not gonna get into how badly the McDonald’s employee messed up my order . This is a McHappy story . 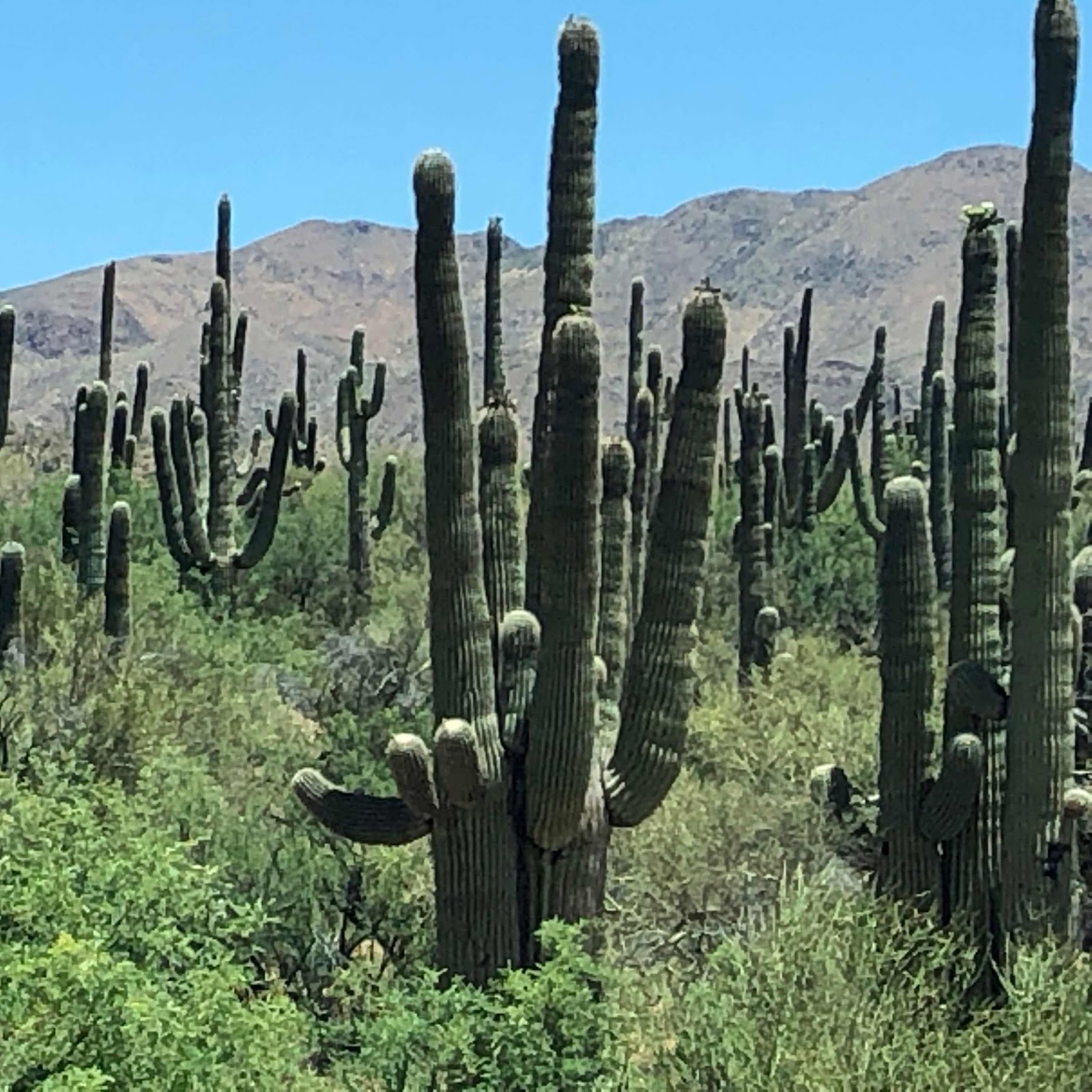 Nothing crazy happened on the ride to Sedona as 4 hours of driving is nothing for me as I do drive a truck for a living . The scenery drastically changed the more north we went . All those cacti 🌵 disappeared and the landscape was covered in grass and smaller brush which sucks because I wanted to get a pic in front of one of those massive cacti . I had to gas up when we got close to Sedona and stopped at a random station where the pump first told me to lift and start gassing up , then it said please enter credit or debit card 💳. The machine then asked for my zip code ? What if I don’t have a zip code ? I put in a random number and it didn’t want to accept it . How stupid is this shit ? I walk into service station and talk to the attendant who says I can prepay and I said honestly this van is a rental , I’m not from here and I have no clue how many gallons this vehicle takes because I’m used to litres and the brain surgeon behind the counter was little miss know it all . I wanted to choke her with her stupid attitude , I didn’t but I wanted to 🤔 it was one of those situations where I thought to myself ... if you’re so brilliant then why are you working at a gas station ? Anyways I sorted that , got the van gassed and didn’t choke anyone . Mission success ! Back on the road we go ... 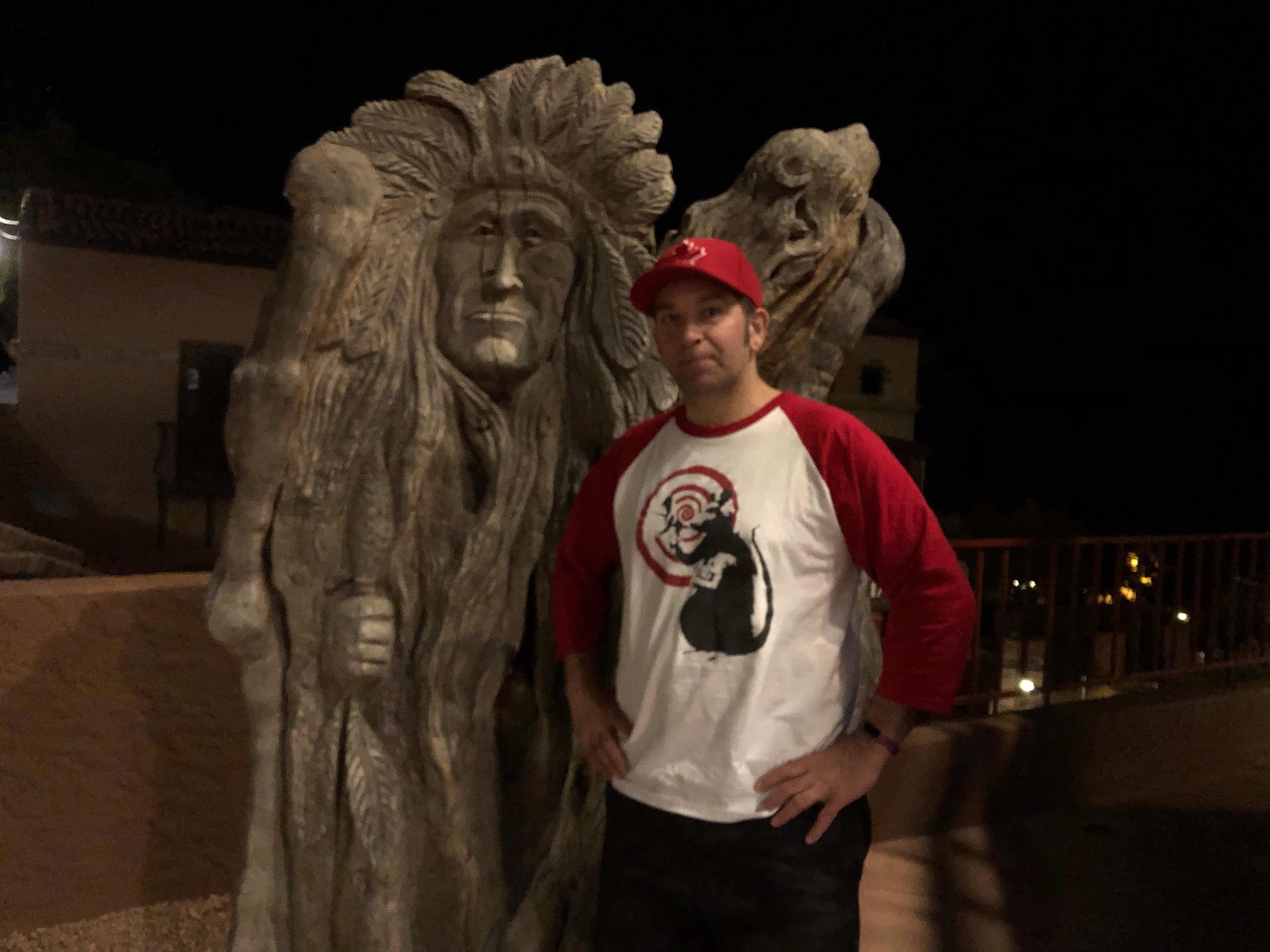 We made our way into Sedona and almost immediately realized this is a massive tourist trap . This is just like a ski town with everything overpriced and townies that aren’t from here . You know that person that travelled here 20 years ago , found a job and never left. That’s Sedona ! As nice as the view is here I would not suggest coming here and staying for more then a night . We found our way to our motel which has an amazing view and is directly on the main strip but is really overpriced just as everything else is here . We got room 31 at The Matterhorn ... our room is decent but the bed is lumpy and I can tell you now that I did not sleep well on it and I woke up questioning if the place is haunted or not . I had some crazy ass nightmares and when I woke up the lights were on in the room .... at first I told myself that Kathleen might have switched them on but then she rolled over and asked me why I turned the light on .... yup not sleeping anymore , time to start writing and plan an escape route if I hear , see or feel anything weird . As much as I’ve always wanted to experience the super natural I would definitely run like the wind if it did happen . Before all this happened we actually dropped our bags and went for a beer . 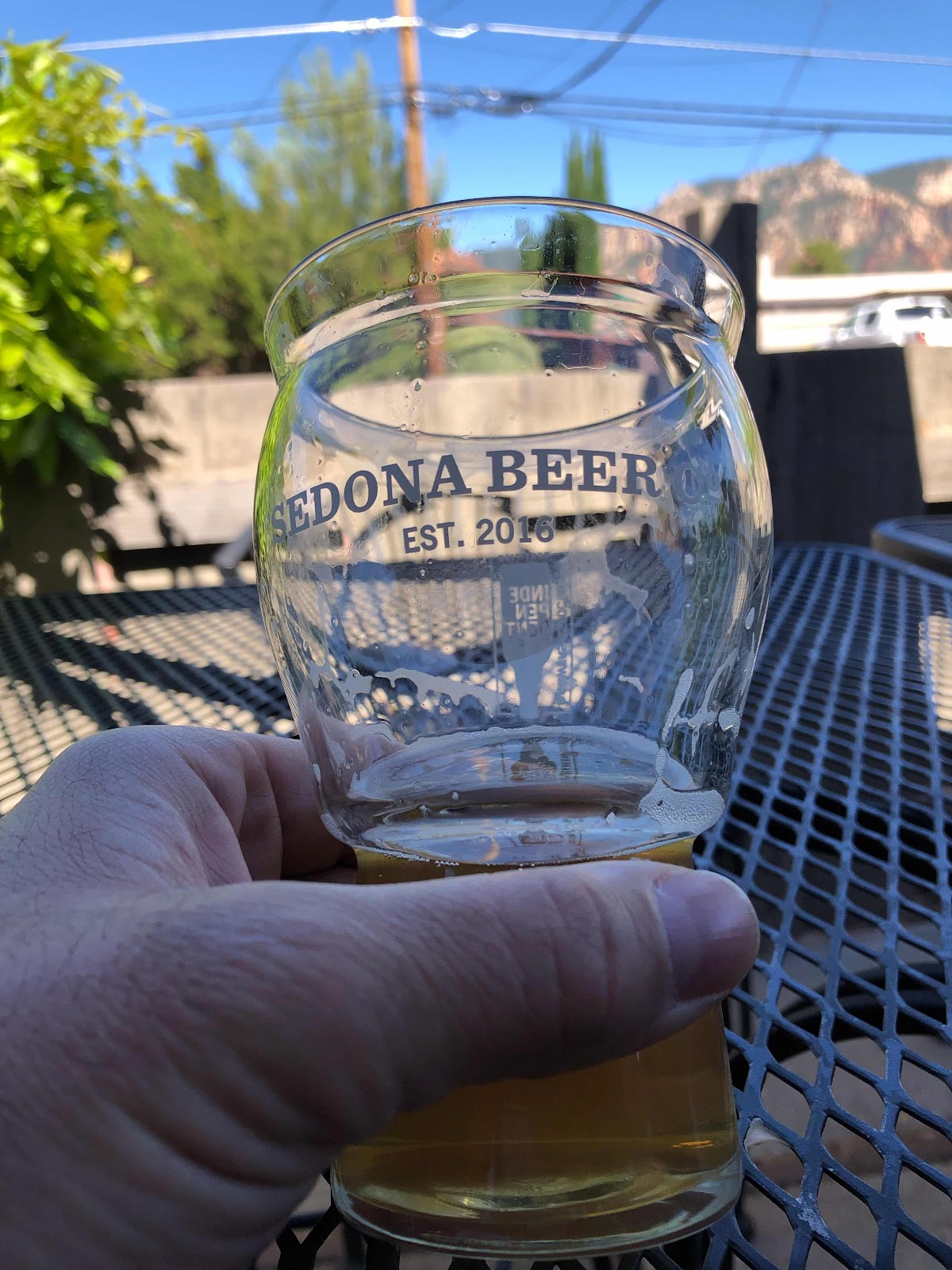 Kathleen found a dispensary and I know it’s not legal here but I could go for a spliff . It’s legal in my country and I’m on holiday 🤪so we walked over only to find out they only sell to people with medical cards . Before I left the place I told them to get with the times and make it recreational and the guys laughed but still wouldn’t sell me any . Oh well ther is a brewery right here also so time to sit and chug back a pint at the Sedona brewery . They had a rye PA ... it was good and hoppy and had just the right amount of rye flavour to it and would have gone well with a nice smoke as we watched all the people filing in and out of the dispensary coming out with big smiles and white paper bags full of goodies . It smelled nice around there . Oh well , time to wander and see all the tourist shops . Everywhere is busy on the strip as tourists flock to this town to see the sights and do outdoorsy type stuff like hiking . All the shops we walked into had happy and friendly employees which was nice and we found ourselves getting hungry . There is a pizza joint across the road that we have a 15% off coupon for so we tried it out and the pizza was pretty darn good . As we walked into every shop after we had realized that everyone was handing these discount cards to go eat and this restaurant must make a killing off this type of advertising . Again this large amount of carb intake had its effect on me and I needed a nap 😴 I’m getting so bloated from carbs and it’s making me tired . 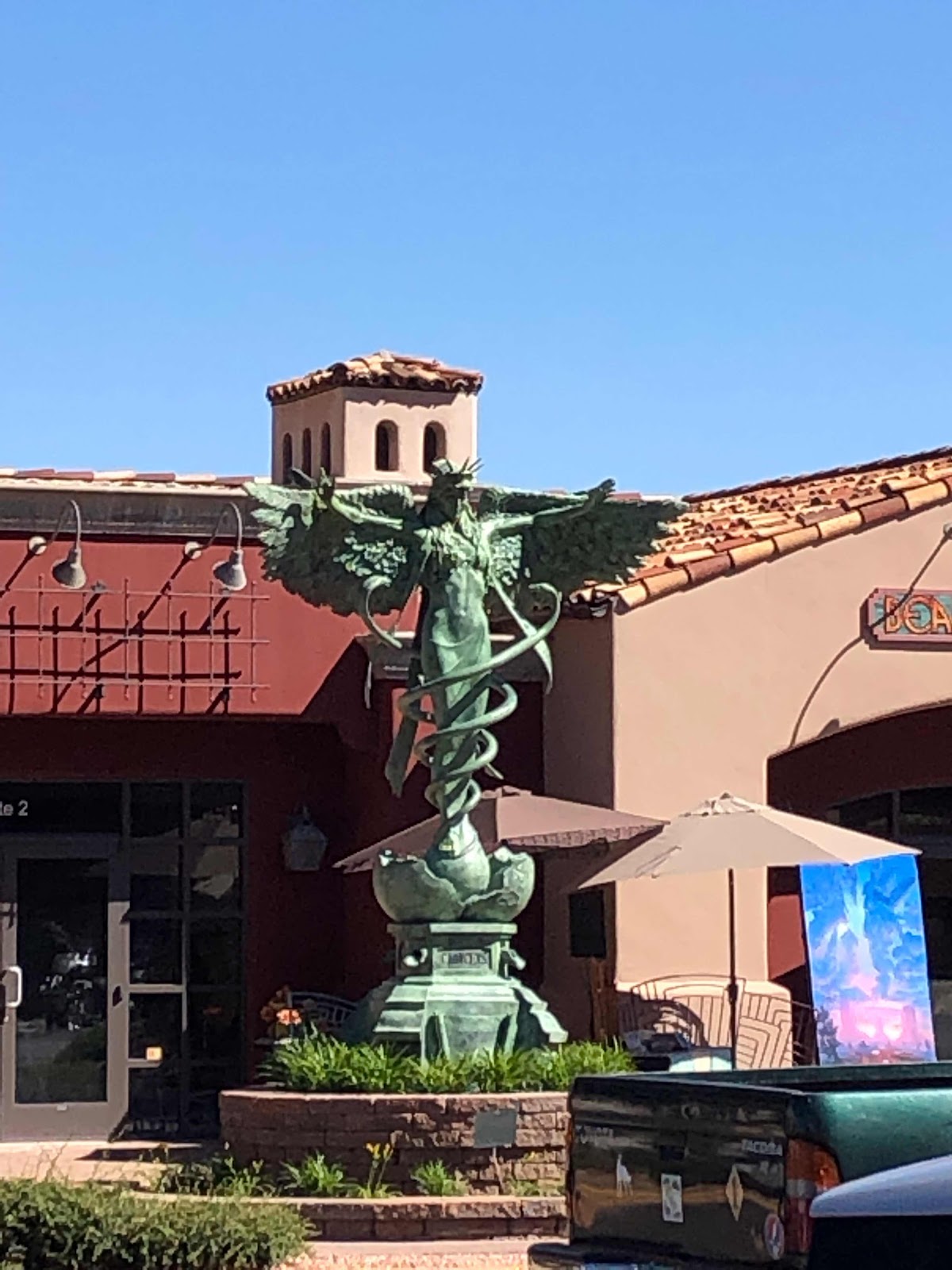 When I awoke from my nap I felt refreshed and got ready to go for dinner but both of us were not really hungry so we opted for ice cream instead . Most of the town closes pretty early and as the dark settled everyone began going home . This has always been a pet peeve of mine while travelling but there is no way to control this and I have to settle for the mediocrity that is handed to me . We found a very busy ice cream parlour poem called The Black Cow and we got our dessert settled as we both enjoyed our sundaes out front on a bench before going for a stroll to see the town when it’s not packed with tourists . Nothing wild going on here , the bars seem tame and the few restaurants that remain open really make a killing off everywhere else being closed  . I could go for some food but I’m not gonna finish a full meal and go to bed stuffed . There is definitely a lack of excitement in Sedona and we opt to get to our room and plan out our next day which includes this Pink Jeep Tour and driving further north to the Grand Canyon . Time to go to bed 🛌. Hopefully the next hotel has a comfier bed in a room with lights that don’t turn on by themselves in the middle of the night 👻


Posted by The Travelling Goalie at 9:43 AM