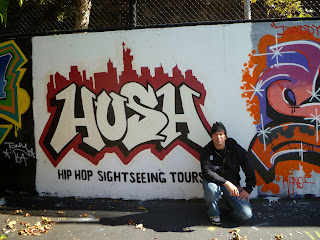 Along my travels i end up doing a lot of really interesting things , not sure if you all know but i have this love for hip hop that i have had since i was a kid . There is this one of a kind hip hop tour in New York called Hush Hip Hop Tours http://hushtours.com/, it is something i have wanted to do for years but whenever i am in NYC i either have not planned for this tour or have had friends with me that were not interested . This past weekend we went to NYC for my bday and the main objective was to do this tour and see some live hip hop shows at the CBGB festival . 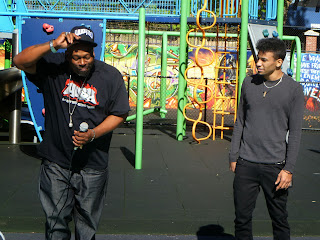 Kathleen and myself walked down to the meeting spot where a rep from the tour met us , we waited for the bus and watched the city move past us .... when the bus showed up our tour guide exited the bus and darted across the street ... for those of you that know anything about hip hop our tour guide was the one and only Grandmaster Caz from the Cold Crush Crew and a former member of the Casanova Crew when he was known as Casanova Fly . This tour was really amazing as we went to spots where famous battles took place and we were shown a very good break dancing demonstration along with some really amazing graf pieces . We covered the 4 elements of hip hop on this tour and even spoke about the potential 5th elements :) You hip hop heads can all discuss that one ! 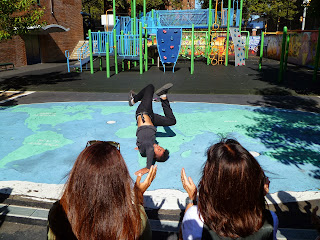 We hit up spots like where the first hip hop party was held 40 years ago at 1520 Sedgwick Ave. and we stopped at Rucker Park ( famous street ball ) ... we even stopped for lunch with Caz ... he was a really cool cat , much respect for him and what he is doing ! It is truly a one of a kind tour that you should check out if you are in NYC .... seriously ! 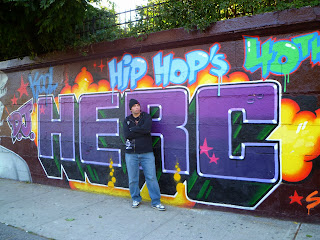 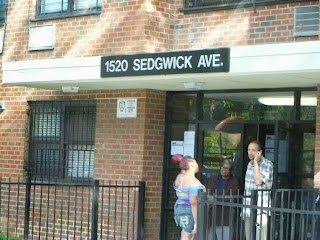 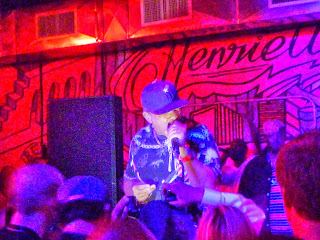 Now that took up most of our day there in NYC ... the night was a different story .... still had something to do with hip hop , but this was pure pure luck that i got to do this ! Remember we have passes for CBGB festival , before i left for NYC a friend of mine told me about Ice-T performing there on the Saturday and i found out it was something to do with the festival (thanks Chris ) . So i found the venue and we went ... when we got there we lined up and found out from this photographer named Brad that this was an invite only thing :( we stayed in line regardless ... we also found out that this venue ( Chez Andre at the Standard ) was really really really small . The line started to move and we got in ! At the front door was Ice-T greeting people ???? WHAT !!!!  So i guess we got really lucky as this place probably couldn't hold much more then 100 people and when i started to look around i started to notice some other rappers in the crowd that i recognized . I hit the bar and watched the show as the first MC came out , she was hard core even bought a cd off her .... Narubi Selah . 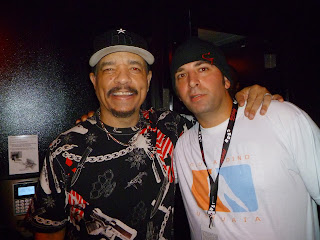 Ice-T was the headliner but he brought out so many crazy mc's with him for this show which went a couple hours longer then was advertised . I still can't believe i got into this show , Treach from Naughty By Nature ... Lords of the Underground ... Dana Dane ... Smooth da Hustla ... it was really really amazing and such a great sound system in such a wickedly intimate environment . I was 15 feet from the stage when i was standing at the bar !!! This day was purely hip hop from top to bottom .... heck even after we left the club we walked past a Banksy piece he had done the night before  . We found it in a sewage basin on a construction site :) 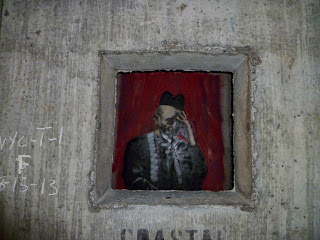 Just one last thing about New York before i sign off ... taxi cabs are such a pain to get , you can't call yellow cabs you have to wave them down and honestly good luck !!! And if you are planning to leave your bags in lockers at bus terminals or any public places , they don't have any . Since 9/11 they banned them in fears of them being used for any attacks .  New York is such a fun adventurous place to be , have fun !

Posted by The Travelling Goalie at 7:53 AM