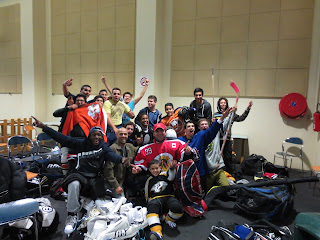 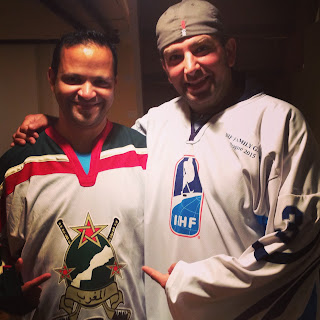 Its been a while since I've had any time to do any writing or anything but for this ... for my friends in Morocco i will make the time :) Right now there is a tournament happening in Rabat, Morocco which makes me burst with excitement to say is probably one of the first international club tournaments on the continent of Africa .The African Nations Cup of Ice Hockey is happening from July 24 - July 31 and  I am also very glad to say that somehow someway i was involved in bringing people together through social media to make this happen . Teams from Morocco , Egypt , Tunisia and Algeria have made their way to Rabat to compete for the first tournament which from now on will hopefully be held annually . It is a 3 on 3 tournament as the ice there is not NHL size or for that matter even Olympic size which is a prerequisite needed for Morocco to begin competing in the world championships . 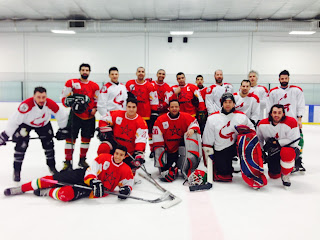 One day Morocco will have an Olympic size rink as they have another smaller rink also in Casablanca which i was never really aware of until this tournament began to take shape months ago and now it has been brought to my attention that there is a desperate need for equipment there for kids and adults to begin playing . Over here in Toronto i am sure most of my Ghetto Blasters team mates and friends have old gear collecting dust in their garage or basements ... i know i see you all sporting your new gear every year :) basically i think its time as a whole we begin to do something for the hockey community and what better place to start then to a country that doesn't have hockey shops ! After all we have actually had an exhibition match against Team Morocco (not national team but close enough ) in 2015 in Montreal and my connection with the amazing people from Fédération Royale Marocaine de Hockey sur Glace even though they are habs fans :( hahahaha !
So i guess its time to officially say lets get some equipment to Morocco so they can grow their number
of participants which would lead to a need for more arenas which hopefully would mean an Olympic
sized rink . What can i say ... I'm a dreamer ! but this is something that can come to fruition . I
personally know these guys in the federation and they are stubborn about making this happen . 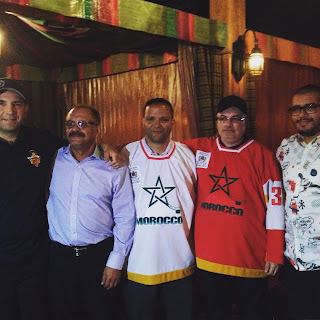 Now i know some of you are gonna ask me ... how are you getting the equipment over to them .... well , recently my good friend Adil El Farj told me a friend of his lives in Mississauga ( right beside Toronto) and is going to Casablanca and is hoping to take equipment there with him . This fellows name is Ryan Kirk , when Adil asks for a helping hand i am more then willing to make it happen so i jumped on board and since then have found out that Ryan will be leaving August 11 which gives me about 2 weeks to gather as much gear as possible to send over to Morocco to donate to those that need the gear with hopes of at least a few pics with people using them . I am sure that the guys on my team will fill a few bags up and I'm hoping to do this annually from now on for others in need as well . If you are reading this and want to make a donation please contact me and let make this happen ! Check out the Moroccan federation on Facebook also and support them . 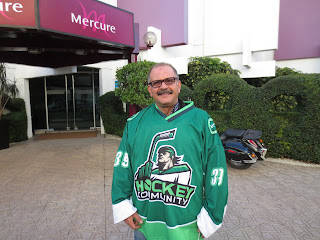 Good luck to all the participants at the tournament in Rabat . I am banking that Mr. Khalid Mrini has a bigger smile then the one seen above right now as he is seeing his dreams come true ... i am so happy for you all !


Posted by The Travelling Goalie at 10:07 AM